In the summer of 2019, I flew to Victoria, BC and got on a boat. This boat was a forty-meter wooden sailing ship. It had two masts, more than forty beds, a galley; tall, billowing sails, and I was about to get on with forty other kids for ten days straight. My dad dropped me off at the dock, and I hopped into the boat, not knowing what to expect, or what could happen.
Fast forward two or three days, everyone knows each other, and its all going pretty smooth. That is, until I get chosen for night watch. Night watch exists because in a boat of this size it is required to watch the anchor during the night to make sure it doesn’t get undone .What this translates to is getting woken up at 3 am with your partner to sit on the deck for an hour. So not that bad, and I had already done it once, right? This time it was with a new partner, but the last time it had worked out fine, so I wasn’t really worried about it. As the night came closer, another boat pulled in next to us, and we tied up together to weather out a storm that was coming. We had all seen it on the horizon, and it was going to pass over us at night. That night, we ate together with the kids on the other boat, and sang some songs before going back to our respective boats to sleep. I got into bed and immediately conked out, and so did my partner. Sometime early in the morning, I felt my shoulder getting pushed. I looked around, and it was one of the people in the group before us.
“Come on!” she whispered, “its your turn for night watch.”
“Okay, okay I’m getting up.” I whispered loudly, then laid back down and wriggled into my rain pants and jacket, trying to not wake anyone up. I could hear the rain pattering above us, and I pulled my coat closer. I almost checked on my partner as I walked past, but decided that he would come up later when he got woken. I went up onto the deck, and the rain was pouring down.
The guys on the other boat weren’t up yet, and so I was the only one looking after two boats. I waited for one minute, then two minutes, then ten minutes, and then I gave up on waiting for my partner. I sat down on a deck box and looked at the anchor chain, wondering what I was going to do for an hour at two in the morning on a tallship anchored in the middle of Vancouver island. As the minutes passed by, I started to see things in the shadows. Fleeting shapes caught my eye, and I tried to look away from the back of the boat and keep up morale. I decided to walk around the boat and check everything, like the anchor and the rudder. As I was walking, I glanced into the water in between our boats, and what I saw I will never forget.
The water was glowing, lighting up the hulls of our boats and reacting to every raindrop like little volcanos. I just stared for a solid minute at the water, and then broke out of my trance and went to get a bucket. As I was walking, two figures emerged from the other boat. Finally, the other night watch was there. I could have yelled with relief, but instead I called them to the side of their boat and pointed at the water. I lowered the bucket I had acquired into the water with a rope I had found, and when I brought it up it was glowing beautifully. Wherever I poked the water, it would light up like fireworks, and when I swirled the bucket it almost looked like a portal. I played with that water for most of the hour, before I eventually poured it back in, the water lighting up brighter than before when it hit.
As I stepped off the ship and got into the car with my over-filled duffel bag of stuff, I looked back one more time at the ship, and thought about all of the things that had happened, and as we drove away, I wondered what next year would be like.
I saw some amazing things on that trip, including the international space station, but that experience tops everything. My partner really missed out by being lazy, and he was disappointed that he didn’t see it the next day. This event was pretty magical, and I would hope something similar happens next time. 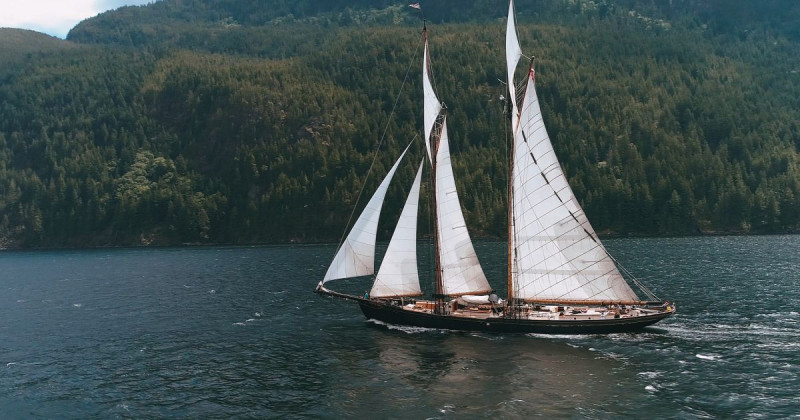