When I was about 10 years old, and living in the small European country of Slovenia, I went skiing with my dad. We hopped onto a lift, it creaked to the top, and we glided down to the start of the slope. I looked over the seemingly steep edge, and decided to graciously let my dad go first. It was relatively shallow for a while, but quickly picked up speed. After skiing for several minutes, we came to the top of a massive, nearly 90 degree, frozen hill. This hill was a monster, to me, it might as well have been a pit of hungry alligators. I took off my skis, and as soon as I started walking I realized this would never work. My ski boots felt like lead blocks, and the cold was starting to get to me, my toes going numb. I reluctantly looked back at the pit of alligators, and trudged towards it. My dad encouraged me, and off we went. I scraped down the hill, falling every few minutes. I finally made it to the bottom, pulled myself to the café, and although we continued skiing that day, for me it was over.
A few years later; after I had been skiing several times each year, I was on the slopes with my friends and their parents. My friends and I soon decided to break off and go on our own. Our parents agreed, and soon we were slicing our way through the snow. We did a few small runs before deciding to go up to the top of the mountain. As we took the lift up, I realized this was the same place that I had gone with my dad; and a sense of trepidation started to build. We got up, and made our way down the slope. We turned to the right at the intersection, and came to the top of the hill. We all turned and braked, spraying the first person to arrive with snow.
“Ready?” someone said.
I responded with a halfhearted “Yeah!”, and my friends slipped over the edge of the hill. I watched them go, and, using all my willpower, I pushed myself over too. I nearly stumbled, but soon got into it, catching up with the others. We raced down, carving corners and spraying snow like a lawnmower with grass. Racing down the hill, all my fears evaporated, and in that moment I was finally confident in my ability. We skidded into the restaurant, the same one I had gone to years ago, but this time instead of softening the blow of defeat, I was there to celebrate victory. I had conquered the pit of alligators. 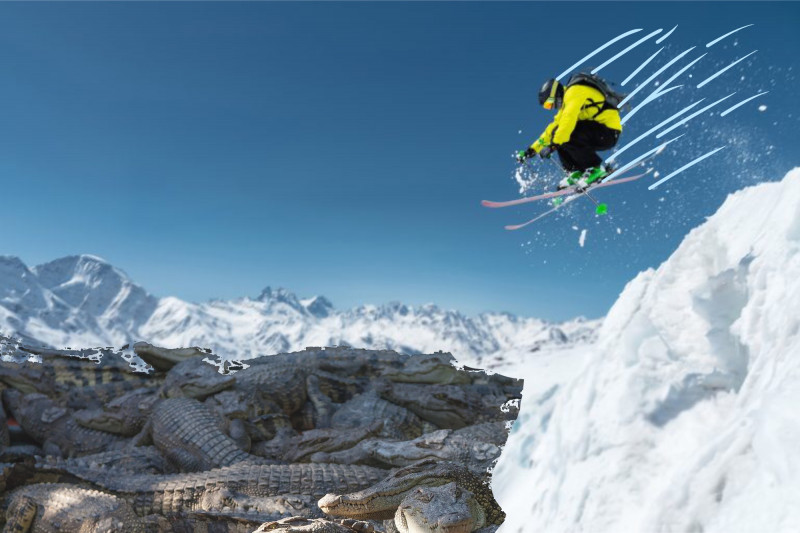