Every first encounter is the most important. It is what defines you to be in the eyes of another. You want to look your best, seem the best. You convince yourself that you are the best, hoping that the other adopts the same point of view as you. Perhaps you can say that summarizes my life, I try to live up to other expectations. So far, I have accomplished much, except for one of the most important. I failed to fulfil my first impression with death. I would recall my first encounter with it somewhat, depressing. I may come from plenty, but the one thing that imprints itself on my skin and on my mind is not what I’ve earned, but what I have lost. I thank God every day for what I have now, such as my amazing family, but I question Him too, asking with tears threatening to leave my eyes, why He would ever take away what I most love?

I come from the place where the sun shines all the time. The mountains, the valleys, the rivers, it’s the best backyard one could ever ask for. Along with the land I call my home comes along the people I call family. But with blessings, there always comes a price. Technically, the first time I encountered death, I was only four. I had almost drowned in the waters of the community pool, ridiculous, I know. I bet you expected something so much worse, but to Death I came across as a little girl stupid enough to walk into the waters without her yellow floaties. After that day though, Death and I became the best of friends. I wouldn’t see it again until I was eight. When my parents moved to the United States, they spent every single second working, putting their blood, sweat, and tears into everything they did. Their children needed someone to look over them when they couldn’t. It was then that I met the angel I called my aunt. As time has passed, memories of her have begun to diminish in my head, but I still recall her sitting in my front porch bench, wearing a green blouse with a cigarette in her hand. It’s ironic now I guess. She was holding Death itself in between her fingers. You could say she was the first person I knew I couldn’t live without, but life doesn’t work that way. Eight years old. I was eight when I last saw her. It was my first time traveling to Colombia, I was excited as hell to see her again. But when I saw her, I had wished I never did. Sounds horrible, I know. I perfectly remember the day. She was sitting in her rocking chair, cozied in her pink robe. Even with that on though, you could tell she was all bones. It was as if her life was sucked out of her body. I remember my dad telling me to not cry, to not let her see me as weak, but the minute I walked through the doors, tears couldn’t stop trailing down my cheeks. I was scarred. I had seen a once healthy woman degrade to thin skin and bones, and cancer was to blame. It’s a real b****, isn’t it? Death had the audacity to make her life a living hell instead of quickly taking it away when the time was right. I had travelled with holiday joy but returned home with something much worse. She died that New Years. It was the worst gift Death could give me. It wasn’t until the very morning of January first that my father told me about my aunt’s passing. I vividly recall that day. I was the last one to wake up, and when my eyes finally opened from their deep sleep, the first thing they encountered were both my sisters huddled together while my baby nephew was clueless the entre time. My mother sat on the bed and my father paced the room. When the words left his mouth, it was as if my soul had not reacted. My mind was having difficulty processing his words, and my heart, well my heart didn’t feel not one strike of pain. That was until I saw my father leaving our vacation home to attend her funeral. That was the moment I knew what value I had lost that day. For the rest of that chilling day, my sisters and I had spent most of our time with my mother’s sister. She was a therapist, and she was there to help us not only with our grief, but with the regret banging at our heart for not attending our aunt’s funeral with our father. I can still say that I deeply regret not going, even if my parents had believed my eight-year-old eyes could not have handled the depressing view of my aunt in a casket.

I learned to grow with the pain of losing a loved one, but nothing hurt more than when Death visited me again at age fourteen. This time was different. The memory has slowly dwindled by now, but I still remember being woken up in the middle of the night only to hear the news that my grandpa had suffered two heart attacks. He had died twice but was successfully resuscitated. He was to spend his last few weeks in the hospital where I would later visit him a few days after we received the call. My grandpa was one of a kind. He was the person who could make me smile no matter what situation. He would call me on every birthday, wishing he could celebrate the special day with me instead of being in another country. I remember serenading him on his 80th birthday. I had spent so much time practicing, making sure it was perfect. When the day approached, I had lost my voice, but I still sang. I sounded like a dying chicken on a stage, but he loved it. I recall running off the stage and into the bathroom, sobbing until it physically hurt. He had hugged me and told me it was beautiful. I didn’t believe him. I regretted standing on that stage, but now I wish I could go back and relive it. I was his little angel and he was my superman. I never thought he could die, stupid I know, but when you spend so much time with one person, you develop this different kind of love that blinds you from reality, and that is what happened to me. My superman died. My family had been gathered around in the hospital lobby, each person waiting their turn to visit him, and when it was my turn, I wasn’t allowed in. I had to be sixteen. I was two years less than that. I had a meltdown right then and there in the lobby. The sleeve of my flannel was dripping wet from the tears I would dry from it. It wasn’t easy hearing the nurse say I wasn’t able to say goodbye to the man I had grown up with, with the second man who raised me. The next day I had filmed a video, so my aunt could play it to him. I remember saying that once he was out of the hospital, I would play him a song on my viola. It took me ten tries until I got a video in which I didn’t start to cry. He died on May 29, 2016. It was only a few days after we had returned to Florida, when the doctors said he was going to be just fine. I never got to say my last goodbye to my grandfather, my last I love you.

Each day after that was agonizing. The world surrounding me was slowly falling apart. The love in my home diminished to the point where I no longer felt it. Even school, a place I used to consider to be my escape place, was falling apart as well. There were times where I wished Death would visit me again, but this time it would be my lips it would softly kiss, lifting me away from this world that no longer felt like home. Looking back, I’m thankful it never did. They wouldn’t have wanted that, my aunt nor my grandfather. They would’ve told me that it wasn’t my time, that only the one above could decide when I should go. They would’ve been right.

I try each day to focus only on the good. There are moments though in which my sadness consumes me whole, but I get over it. When I think about it, there are so many good things that have occurred, even more than the bad. I think about the time I became an aunt at age seven. God had blessed my family with a little boy named Santiago. I don’t know what I would do without him. I think about the time I met my closest friends at age fifteen, the ones who help me get through the many obstacles interfering with my happiness. I’ve managed to keep them close to my heart for more than two years now, and I would call that an accomplishment. I recall the moment my sister told me she was pregnant with another baby, when she told me I was going to be an aunt again. This happened at the age of sixteen. It’s moments like these that make me realize that life is full of blessings, full of good things.

So, I say, sure, my first encounter with death wasn’t what I expected. It saw me as weak and vulnerable, but now I can say that the moment Death visits me again, I won’t be the same little girl who fell at its feet from fear. This time it will be Death who has its first encounter with me, for I will be stronger than it could ever be. 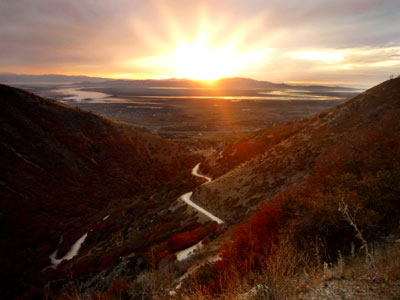 My inspiration behind this piece has to do with, of course, two of the most important people that were in my life, and how it was when I lost them. It's about my journey through loss and eventually, recovery.