I smiled to myself as I walked down the empty sidewalk toward my elementary school. It was spring again, and by some miracle, I had almost finished my first year of high school. Piles of homework still lay strewn across my bed, but that could wait. I had been anticipating this day for weeks. I hadn’t been back to visit my old school in the four years since I graduated fifth grade, and I couldn’t wait to see how much had changed. I knew that none of my old friends or teachers would recognize me – my bangs and patterned headbands were long gone – but that didn’t matter. I could introduce myself and try to pretend that we still had things in common. Anyway, I wasn’t going just to see them; I was volunteering at the Fun Fair.

At my grade school, the Fun Fair was the most eagerly awaited day of the year, coming in ahead of the Family Picnic (which was always rained out) and even the legendary Olympic Day (which was only fun if you could pick marbles up with your toes). Students dragged their families to school on that Saturday morning to play games and win thrilling prizes like Slinkys, bracelets, and rubber frogs. I would be in charge of handing out the most elite of all the prizes: goldfish coupons. The object of the game: throw a ping pong ball into one of 25 plastic fishbowls. How many skeptical parents would be forced to visit the pet store tomorrow? It was up to me to decide.

As I approached the unusually quiet playground, I squinted up at the oak tree by the chain-link fence. I had never been tall enough to climb it, but I was too old now. I missed out on a lot of things that way, waiting too long and letting my time run out.

Thud. Someone had jumped out of the tree. A fifth grader, probably. I turned around.

I kept walking, trying to act casual. “Hey.” I blinked a few times in a weak attempt to calm the avalanche of memories rumbling down behind my eyes. Walk, Grace, walk. He doesn’t recognize you.

Feet frozen, heart pounding, I turned to face this person I thought I’d never see again. Our eyes met. The 15 feet between us kept me wondering if his eyes were still as blue as they had been six years ago. I took a breath.

My memories somersaulted into view, dusty and untouched.

I crossed my sweaty fingers – both hands – as I stared at Mr. Krauter. He had settled in the reading chair, the one with gold-painted legs and a collapsing velvet cushion, and we had gathered around his feet in a sad, clumpy circle. It was time to Drop Everything And Read. But first, someone had to be chosen. Mr. Krauter squinted through his bushy eyebrows at the clipboard of names. He cleared his throat.

“Emma, you picked last week.” Emma nodded. She had requested Read to Self. Not bad. I’d take anything but Word Work.

“Let’s have a third-grader pick today,” Mr. Krauter offered. “Who wants to do it?” My hand shot up, as did everyone else’s. We wiggled with anticipation. There was no greater honor than being chosen, and we all knew it. Our teacher let his eyes linger on each of us, taunting us, until they finally landed on someone. “Landon, what do you want to do?”

Landon didn’t hesitate for a moment before declaring, “Read to Someone.” Grinning, I let my hand fall to my pocket. I could feel his note inside: a promise. Diary of a Wimpy Kid. Our favorite book. I was his Someone, and when he flashed me an excited smile, I knew I was the luckiest Someone in the world.

Thirty seconds later, Landon and I were in our usual spot, tucked away in the corner closest to the door. It wasn’t a very comfortable place, but it was ours. The cold from the scuffed tile floor soaked into our bodies. We rested our backs against the cubbies. Our arms were pressed together out of habit; our classroom’s air conditioning was always stuck at the highest setting. I set our red paperback bible down across our laps, and we read. He read the odd pages, I the evens. We were shushed once or twice for laughing loudly – not that it stopped us.

That was how it started.

The projector breathed gently behind me. Whirrrrrrr click. Whirrrrrrr click. Mr. Krauter was droning on about something – grammar? The solar system? It didn’t matter. I had only one thing on my mind. I glanced to my right, where Landon had turned around in his chair to watch the presentation. His face glowed in the faint light that spilled out. Each strand of his messy golden hair was illuminated. I didn’t want to look away. There was something about that image, the shadowy smile playing on his lips, that enchanted me.

Reluctantly, I tore my gaze from him. I was running out of time. With a glance toward Mr. Krauter, I flipped to the last page of my notebook. Its edges were cratered and uneven where I had ripped bits and written notes. Today I tore off a small Kentucky-shaped piece and wrote I like you.

I sealed my note with care: one horizontal fold, one vertical, another horizontal. I cupped the note in my hand and waited. Landon was still focused on the monotonous presentation, his blue eyes sparkling with projector runoff. He seemed so much calmer than me. I was almost angry. Didn’t he know how much was at stake? Didn’t he understand? Of course not.

Biting my lip, I nudged his arm with my elbow and offered him the note. (This was normal for us.) He plucked my secret from my fingers casually, as if it didn’t matter. I tried to look away, to slow my heart’s incessant pounding, and then –

It wasn’t God, just Mr. Krauter. He had seen me pass the note. I panicked. Could he have some what? Some gum? Some glitter? It didn’t matter. Landon was already handing over the note. Fortunately, no one saw me blush in the soft light. I watched the slip of paper disappear in Mr. Krauter’s massive hand: tiny, helpless, and still folded.

I spent the rest of the day in an embarrassed daze. Every glance at Landon reminded me of my failure. I had daydreamed about this moment for weeks, and for what? Now Mr. Krauter knew, but Landon never would.

My Santa hat was itchy. They all were, as experience told me. The webbed plastic lining dug into my forehead, pulled at my hair. This was the curse of every Christmas choir performance. We were adorable, I’m sure, but the hats clashed with our maroon T-shirts and made it hard to enjoy the carols we were singing. Our first-through-eighth grade voices echoed through the mall lobby, falling upon the ears of last-minute shoppers.

We were nearing the end of our holiday repertoire when Landon and his family entered the lobby to escape the snow. Intrigued by our chorus of Santas, they stopped to listen. Landon waved when he saw me. I smiled back. We had gone our separate ways after third grade: he to Ms. McGurn’s class, I to Ms. Wennerberg’s. We only saw each other at recess now. Sometimes I missed him. Sometimes I regretted not telling him how I felt, but what was the point? He never found out, and now he had new friends. New books.

This wasn’t the first time I had waited too long to do something, and it wouldn’t be the last. There was the long night I spent doing my entire Native American project. The white dress I kept squeezing myself into long after I outgrew it. The three years I spent in middle school silently hoping that my crush would ask me out. Was it just a habit, or was I afraid of something?

Landon’s family stayed for a few songs, then moved on. I felt like I had missed another opportunity. But what could I have said? A confession? An apology? Maybe I should run after him ….

But instead I sang Christmas carols in a lobby, wearing an itchy hat.

I let out the breath I had been holding, forcing my gaze toward the chain-link fence, tracing the peeling green paint with my eyes as I used to with my fingers. Landon watched me as I shifted my weight, already feeling the need to go. His casual discomfort was barely visible. To him, I was just another distant memory. Our words bounced off each other like ping pong balls on fishbowls.

I looked at him one last time. “Bye.”

I think he smiled.

I didn’t look back as I entered the school. I stopped to chat with my fifth-grade Spanish teacher, who told me that the Spanish club I had started was still going strong. My feet stumbled over the shallow, speckled steps that led to the second floor, down the hallway, into the bustling gym. I found my station, taking a blue apron from a mom who was running the game. “Watch out,” she told me. “You never know quite where the ping pong balls are going to bounce.”

I smiled at my first winner, an eight-year-old boy. “When can I get the fish?” he asked.

“Whenever you want,” I told him. “But don’t wait too long. Those coupons expire.” 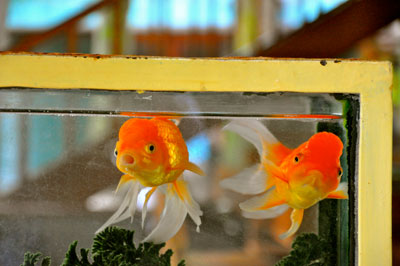