“Jane don’t. Keep the door closed!” my mom insisted. Her sharp tone startled me. “ The wind will blow everything out.” I glanced at the car floor littered with a few Power Bar wrappers and napkins. The wind was blustering over the mountaintop, so furiously the mini van rocked in place. I couldn’t wait much longer. I climbed over the seats and crawled out the driver’s door. Instantly I was met by a blast of wind. I stumbled towards the trail. My hair, thrashing in all directions, whipped my neck and face. I quickly tamed it into a bun. I looked back at the rest of my family, their heads down, hoods up sluggishly battling the wind towards me. “Do you have the box?” No one heard me.

We had arrived in Joshua Tree California, the destination for my family’s annual surprise trip. My Dad has planned a mystery trip each winter. Until recently I had thought he planned these vacations in secrecy to entertain my brother and I. Truly he had devised a clever escape from spending the entire winter vacation listening to Papa blast Fox news on the TV, while my mom’s sisters argued over who would make dessert for Christmas dinner at my grandparent’s house.

“This way?” I asked my dad as I pointed at the path. Busy adjusting the lens on his camera, he nodded without looking. I rolled my eyes and lead the way to the lookout point. The poncho I wore flapped in the gusty winds, amidst the desert landscape I couldn’t help but imagine myself as Clint Eastwood venturing over a mountain to ambush outlaws below. I sat down against a small stonewall that blocked out the wind. My face was pinkish and numb and my lungs stung from the cool air.

Before me the barren dusty mountains gradually descended into the flat valley below that stretched beyond the horizon. The landscape was spotted with small shrubs and bushes, and looked naked in comparison to the high desert littered with shaggy Joshua Trees. The tan desert floor met glittering gray cities and the giant wind turbines looked like a patch of tiny white pinwheels in the distance. Beginning at the rocky foreground my eyes wandered from one rock to the next and followed mountain ridges that blended into the valley floor. Comparing proportions, I tried to get a sense of distance and scale. My dad stood next to me.

He extended his arm and pointed, “Over there to the left way off in the distance, that white patch, that’s the Salton Sea, and Palm Springs is there, straight ahead, just below the San Jacinto Mountains and there in the middle is Coachella Valley.” His knowledge of geography never failed to fascinate me. “Oh, and see that line down there?”

“This is the perfect place for grandpa Jim.” My Dad smiled and placed a black velvet bag on the rock beside me. Henry and Mom joined me on the rock.

“Are you sure uncle Sean won’t mind?” I asked.

When I was nine my grandpa died. His death was sudden and a surprise to the whole family. I didn’t have a close relationship with Grandpa Jim, mostly because he lived 350 miles away and I visited him for a few hours on Christmas morning each year. Nonetheless, I was upset by his death, unsettled by my mom’s tears, and the shock that accompanies tragedy. The loss of Grandpa Jim was my first encounter with death. At the time I was to young to comprehend deaths abstraction. It was impossible for me to grasp the intangible concept that anyone, at any moment, could permanently vanish.

We had kept my grandpa’s ashes in a box in the garage for years. My dad had been waiting till his brother’s family in Texas could scatter Grandpa Jim with us. Years passed and all of the grandchildren were grown while Grandpa Jim’s ashes remained in the garage. It had become apparent that it was unlikely that the families would reunite to say our final farewell to grandpa Jim. So we did it without them.

Standing beside my dad on the mountaintop I watched him untwist the thick clear plastic bag filled with the chalky powder of his father's remains. I peered inside, surprised by its creamy white color and the tiny pieces of bone mixed throughout. The wind blew furiously. It was hard to tell which direction it blew in as the exposed peak was caught in the crossfire of multiple winds. He held the bag above his head
“ Keep your mouth closed.” I joked. He gingerly shook out the powdery white contents. Immediately the winds whisked the ash up into the air. The moment the soft powder made contact with the wind it hurled forward in a flash, meandering and twisting in the air as it descended into the valley below. I stood smiling, grateful to bear witness to Grandpa Jim's return to nature. Plumes of white ash billowed about my dad. He dumped the remaining ash on the ground, backing away as he shielded his face from the dust.

“It’s all over you!” I shouted pointing at his pants. The entire front side of his body was covered in white ash and his powdery face resembled that of a Geisha. Between his laughter he wiped the ash off his mouth. We laughed hysterically, reminded of Walter scattering Donny’s ashes in The Big Lebowski. There was a streak of white in the dirt where my dad had dumped the bag out. Henry and I, eager to take part in Grandpa Jim’s release, kicked the ash into the air and watched it blow away. As I headed back to the car I turned to capture one last glimpse of ash drifting off the mountain.

We piled back in the car, escaping the winds. My heartbeat pulsed, returning to its normal rate. As we drove down the road to the plateau of Joshua trees, I felt the calm of the desert envelope me. 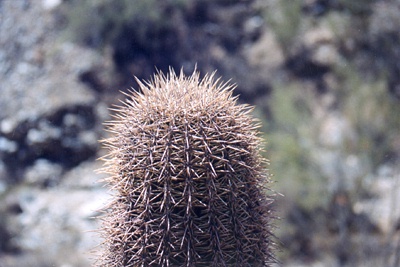