Dark, ominous clouds loomed above me like grey beards drifting towards the tips of mountains. The rain poured harder, almost making it seem as though it was directed at me. My clothes were soaked through, Causing it to be as cold as ice when the wind whistled straight towards me.

Thunder clapped, causing me to jump and lose my footing. I slid down harshly over rocks and mucky gravel, tumbling into a blueberry bush. I stood up, dazed and dizzy. Cuts all over my face, arms, and body began to bleed, creating a sting-like pain. Soon more rain poured down, sweeping all over my body and pulling stray strands of hair across my face. Water started to create a swamp around my feet where I stood.
`
Shakily, I made my way back up the steep mountainside. With each place I steadily set my hands, earth and rock caked in watery mud would threaten to loosen. Thunder boomed again, but I kept holding onto the mountain instead of falling.

I slowly inched my way over to my dad. His bright orange beard stood out on him, blocking out the dull grey clouds. It shone as brightly as the sun itself. He wore a mad grin on his unshaven face, his eyes radiantly shining with a dangerous happiness and a bit of caution sprinkled throughout. He looked like a wild dog who was fighting the easiest of fights, while still protecting his young daughter. Of course, the fight would not be so easy for her.
As I made my way over to him, the rock I had grabbed slid out from the crevice it had been snug in, making me fall. I was ready to embrace the fall and sickening sound of a splat when my dad caught me by the hand and pulled me up to a new hold next to him.

“Look!” He cried over the roaring thunder, “Smooth granite going straight up!”

I stared, petrified with terror. I was horrified at the sight, paralyzed with the thought of trying to climb it.

Smooth granite did indeed run straight up the tall mountainside. A few bushes, stocked full with Maine’s blueberries, lay scattered about on the smooth rock.

All of the sudden my dad, evidently fearless, charged right up the mountainside into the dark clouds, presumably the top. He didn't hesitate, or even stop to catch his breath. He sped past the blueberry bushes, without a single misplaced foot. He then called for me.

I decided I had no choice but to follow in his footsteps. I took a step and sprinted forward, up the slick, wet rock. I was surprised at how I didn't slide or slip, even at my remarkable pace. Soon my pride took over. I mean, why not admire all the ground I had covered?


The moment I stopped, I froze. Fear slowly crept through my body, inching its spidery webs of terror, slowly, to the tips of my fingers. I stood frozen until the fear reached my stomach and toes. I couldn't move.

I shut my eyes tight, and covered them with my hands in a jerky movement. I caught hold of the nearest blueberry bush in a death grip, and yanked myself down next to it. I curled myself up tightly, pulling my knees to my chest. I could barely move as the haunting fear of falling hurtled itself at me whenever I attempted to lift a finger.

Let me just tell you, if you have never experienced this, that it is traumatizing. You would think that I would keep going so the nightmare would end, but no. When this paralyzing fear hits you, you get hit hard. No matter how hard you try to move, you just can’t. You freeze completely, as if everything but the continuous, rapid, thoughts that shoot through your head have shut down.

Anyhow, negative thoughts continued to pierce my courage, making me cry out for help. I lay there, drenched in rain water, with not even enough power to cry. Suddenly, I heard warm, encouraging words from my dad, but distantly as if I was starting to cut myself off from the rest of the world.

I couldn't think, so I yelled ‘NO!’ over the rain and thunder.

Suddenly, my senses started to float back. He was right, if he tried to come back down the mountain he would slip and die for sure. Then I would have no dad, and be stranded with no hope.

I shakily stood up, still clenching the sharp branch of the bush. When it started to hurt instead of feeling numb I let go. I paused and looked around.

I rapidly began to slide, the water carrying me off, and pouring down off the cliff. My body threatened to lock itself up again, but I resisted the urge to comply. I ran as hard as I could against it, bolting for my dad. Even though I kept sliding and slipping, I continued running, even as I flew into his arms, thankful that I had someone to save me. 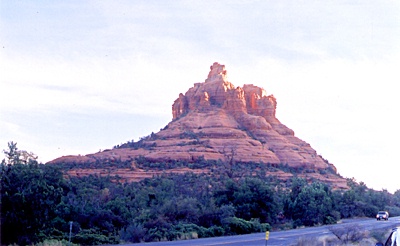 The author's comments:
This was one of the many traumatizing events that occurred in my life. We had decided to go mountain climbing without giving a thought about the weather or mountain, and ended up climbing straight up granite in the pouring rain. Next time, I'll try not to look down.
Post a comment
Submit your own