When I was five, I wanted to be a New York City taxicab driver. I dreamt of meeting all sorts of people and learning about them as we explored the urban jungle together, if only for a few minutes. Even as a child, I knew I wanted to help others find their way in the world. Most people spend their adolescence trying to figure out what they want to do with their lives, so I wore my decision like a politician's campaign button and told my dream to anyone who would listen.

So when my mother asked me what I wanted to be when I grew up, instead of a doctor or a lawyer or even a fireman, I told her a taxi driver, proud of his shiny yellow cab and modest New York apartment. She frowned and shook her head. “No, you're not. Someone is going to get in the back of your cab and blow your brains out.”

By the time I was 11, I had read all my parents' books and spent my afternoons watching the news and discussing the world's problems with my father. Nothing worldly mattered to my mother; she focused on what to make for dinner and how to style her hair. Sometimes she would ask me about school, and I tried to tell her as little as possible; I didn't want these two worlds to touch.

School slowly helped me develop a sense of self, free of the scrutiny I faced when I confided in my mother. I made friends who could relate to me, and I knew exactly what to say and how to say it. So I decided I would become a therapist, helping those without the tools to help themselves.

During a discussion with my father about college and the future, I informed him of my new career. He told me I would do great at whatever I decided to do, and went back to scanning the paper between sips of coffee. My mother turned from her dishes and simply asked, “How are you going to help others if you can't even help yourself?”

The following year, I enrolled in a poetry elective. I've always had a fondness for books, and I thought that maybe I could gain insight into being the one behind the stories. On the first day, I eagerly strode into the poetry class clutching my blue notebook. There were only 14 of us, so we pushed our desks together and created a family.

During dinner that evening, my father asked about my first day of seventh grade. I spoke of each class, lining up their teachers in a verbal firing squad like every first day. My mother smiled as she picked through her salad, sliding the onions to the side. It seemed all too fitting; my mother hated things that made her cry – even more than the days I wore dark colors and hung her “suggestions” back in the closet.

The sound of metal scraping against porcelain on my mother's plate stopped abruptly. I braced myself, mentally scanned through the things my father and I had said, but nothing seemed inappropriate.

“Poetry,” she stated dryly, “is certainly unacceptable. Are you going to become one of those girly men who write about their feelings?”

I wish I had said something clever, but instead I retreated into silence and quickly finished eating. Her bitter words were nothing new, and her disapproval was becoming a theme in my life. If my father ever objected, I never knew it. In our household, we kept our opinions to ourselves, or at least away from my mother.

The following day in poetry class, we were reading Edgar Allan Poe when class was interrupted by a phone call. I thought nothing of it, and continued skimming through “The Raven.” Then I felt a tap on my shoulder and looked up to see my teacher standing over me. She said I had been switched to a science elective, wishing me luck.

I was disappointed that I didn't get to stay in poetry class, but I knew I'd see my new little “family” in the halls occasionally, and that I could continue reading the works we started. When I entered the science classroom, I was surprised at the number of students. Thirty pairs of eyes watched me as I scanned the room for somewhere to sit. I knew then that something odd was at play; it didn't make sense to be switched from a small class to a full one. I didn't know what had happened until I got home from school that day.

“So, how was poetry today,” my mother asked with a smirk. The counters were covered in cookie dough, and my mother's hands in flour. I watched as she kneaded the dough into submission, and I felt a knot
form in my stomach as I put the pieces together.

“I was switched out today,” I said as normally as possible. I could feel the color leaving my face, but I didn't want her to know the pain she had caused; I didn't want to give her that power.

“I see. How could that have happened?” she asked smugly.

I went to my room without a word, unpacking my backpack and searching for my poetry notebook. I traced the spine with my fingers and began to flip through the pages, which were all still blank. Then I hammered my feelings into the pages, until everything I felt was out of my head and on paper. I felt at peace for the first time.

Mother, I know what I want to be when I grow up: Happy. 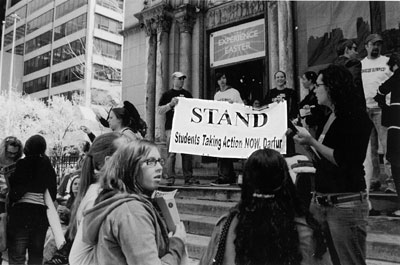 View profile
I first read this in the magazine and it really, really made me think. I think this is really inspiring and I just can't stop reading it. You're a really great writer and I wish you the best future one can have!
isimplywish BRONZE said...
on Jan. 14 2012 at 5:55 am
isimplywish BRONZE, Christchurch, Other
2 articles 0 photos 19 comments
View profile
Wow this is so amazing! You're a really great writer, so keep doing what you love. It's inspirational, to me at least. This is absolutely, truly and beautifully fabulous :)
IchigoSkyline SILVER said...
on Jan. 11 2012 at 10:36 pm
IchigoSkyline SILVER, Waterford, Michigan
5 articles 0 photos 2 comments
View profile
Thank you so much! I did post some of my other writing work on the website, yes. None of it quite as lengthy as this, however.
otherpoet SILVER said...
on Jan. 3 2012 at 8:48 pm
otherpoet SILVER, Wayland, Massachusetts
6 articles 9 photos 254 comments

View profile
This is amazing! I admire your spirit and bravery. Good for you, standing up for yourself is hard to do, especially against the ones you love. Did you post any of your poems on the website?