First, there’s Aunt Leslie, with her mousy hair cut as short as a man’s. She’s kind of bulky and strong, too, and that adds to the man effect. She snorts when she laughs. My God. It would make a pig proud.

Morgan has fiery hair that sticks out from her head in all directions. It looks as though she’s been shocked. She enjoys dancing. Too bad she’s no good at it. She always asks me to dance with her, and I politely refuse.

Brenda is skinny, with long limbs. Her hair is always swept up into a crumpled bun. She’s pretty funny, but in a dark way. And she’s also got that dancing problem...

Uncle Teddy is loud and boisterous, surprising for a man so old. He’s like a teenager. His hair is white as paper, though, and he’s got a bit of a belly. Not your average old man. He scares me a little.

Evan would almost be normal, if it weren’t for his brain. Boy, he could talk all night long about something no one cares about. Once he gave me a useless lecture about some kind of foreign sausage. He has a photographic memory, too, which gets annoying. His back is usually to you when you talk to him. He’ll remember what you said, of course, but still.

Mimi, my grandmother, talks to anyone and everyone. She just goes right up to people on the street and says, “Hello, this is my granddaughter, Amber. She’s in seventh grade...”

“She plays the cello and she has straight A’s...” Mimi is quite clueless, too. She walks so slowly, and her face is as shapeless and crinkled as a scrunched-up lunch bag. It’s embarrassing how she always gropes for my arm, just to get down one step.

My family. Oh, if one of my friends from school saw me with them in the street, I would pretend not to know them. I mean, really—a snorting aunt, a loud uncle. Two dancing cousins with dark senses of humor. Another cousin who enjoys talking about sausages. And a hobbling grandma that forgets things that happened scarcely a minute before.

I love them so much. 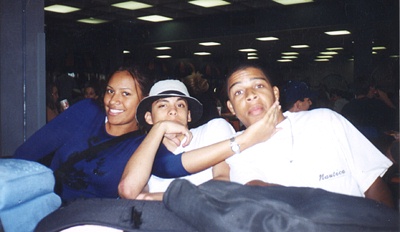