In my father’s cold, dimly lit studio apartment, my father and I gathered around a plastic table. A few styrofoam boxes with steam billowing out the top lay upon it — inside were chicken egg rolls, fried rice, and chow mein.

“I wasn’t sure what you liked, so I got some food from down the street,” my father said as he set the table. “I hope you like it.”

I shrugged. I was hungry and not a picky eater. So, I picked up a pair of disposable bamboo chopsticks, split them in half, and wrapped them around the chow mein noodles. It had been two years since I sat in this very room. The six-hour drive from the suburbs of Detroit, Michigan to Buffalo, New York was a wearisome journey. My father’s hands were covered with calluses from the long hours of holding the steering wheel. Every three weeks or so for these past three years, he would drive the repetitious route through Canada between his family and job.

The open window bellowed in crisp winter air, fluttering the newspaper that lay below the takeout boxes. My father picked up a piece of chicken with his chopsticks and placed it in my bowl. “How about we go and see the falls from Canada this time, and change up the scenery a little?” he asked my mother and me.

“Sure,” I muttered, fidgeting with the chopsticks before eating huge bites of the delicious meal. Already, I was thinking about how to spend the rest of my winter break back in Michigan eating mom’s home-cooked meals, playing video games, and hanging out with friends.

At the break of dawn, the sun had barely peaked out, but my dad's van's engine awoke in frigid weather. The sound of tires crushing freshly fallen snow echoed in the warm passenger seat. Outside the foggy windows, trees topped with snow appeared around me. I felt as though my world morphed into a real-life winter wonderland. Gradually, the noise of millions of gallons of water drowned out the other sounds around me.

“Remember fishing back in Michigan?” My dad’s voice broke the silence. “Can you imagine what the fish are like up here
in Buffalo?”

“Yeah, we haven’t fished in a while,” I replied, thinking back to the years of fishing with my father. Back then, my chubby little hands were barely able to cast the line more than a few feet. I grew up around water in Maryland, near the Chesapeake Bay, where I not only fished, but also grew to love the sound of water and everything it entailed. It was through fishing and being by the water that my father and I connected. The solitariness of nature, easy drawing of the line, and brief spurts of excitement that I looked forward to every summer. We would come away from the water happy regardless of how many fish we had in our hands and later in our stomachs – content with the day that we had shared together.

Yet, fishing was not always associated with good memories. I still remember that trip vividly. Summer was coming to an end, and school was just around the corner. Knowing that we couldn’t fish until next year, my father and I packed our gear into our old, rusty Chevrolet van. The cool riverside breeze licked my face as the seagulls crowded above my head. My father’s smooth hands slowly reeled his pole in with his body swaying, stiff as a rod. As the tides crashed against the tiny wooden dock we stood on, my father broke the news that he was going to work somewhere else because of a job opportunity. What that entailed, I later learned, was that my father had to move to New York for a new job. After the conversation, we both just stood on the dock, not knowing what to do next. At that moment, I didn’t know it would be the last time I would go fishing with my father.

The sun glared off the rearview window into my eye. I was awakened to the sound of tires screeching against the cracked pavement. When the van had finally come to a halt, I opened the sliding door. My feet hit the cold concrete ground, littered with a thick layer of salt. In the distance, tall metal railings lined the sidewalk, and across them, the falls’ roars came alive. With each step, more condensation formed on my forehead.

When I finally reached the falls, I saw my father ahead of me, gripping the thick metal railings while peering into the distance. Standing next to my father’s calm, steady pose took me back to the moments of fishing with him – the comfort and assurance I felt. Feelings I no longer had.

This was not the first time I stood in front of these immense falls. Around two years ago when my father had first moved to New York, he decided to show my entire family his new apartment, located only 40 minutes from the falls. After a short drive to Niagara Falls State Park, we arrived. My eyes were wide open, taking in the waves of the falls. At that time, my father had only left for a few months and made constant trips back and forth between his two homes. Each time my father visited, he would grab a few essential items, ranging from pots and pans to office supplies, before he left. During his short stays, he would sit in his home office, littered with paper on the ground. While he packed, I fidgeted with paper clips and staples for hours, enjoying his company as the sound of papers and boxes shuffled around me. However, after a few months of this moving, only a few paper clips remained in his study room. I didn’t know it then, but over time, the study room would transform into my space – a place to do homework, write papers, and study.

Now, standing before the falls once again, I was brought back to those memories. I realized the threads that had me hooked to him were unraveling with the distance of New York to Michigan, the moments we did not spend together, my life getting busier with school and friends that he could not name — the same way I could not tell you the streets he now jogged through. I couldn’t help but ask: Why?

I took my eyes off of the falls and looked at my father's scratchy beard. As my question slipped through my lips, it only came out as a soft mumble. My father looked at me, searching my face for what I meant. I turned away, concentrating on the falling water in front of me: “Why did you have to
move here?”

My father’s gaze followed me as he also turned toward the rushing water. “I know it must have been hard …”

Hard was one way to describe it, but it was more than that — more in the sense that I could not put into words. School, friendships, and everything else were more than enough to take my mind off the fact that my father was no longer around. My relationship with my mother had deepened, despite her working long hours while taking care of me. Yet, there were constant reminders, such as having to take over washing dishes, shoveling snow, and cutting grass. In retrospect, I didn’t realize what growing up entailed until it had already happened. I no longer wished to have “dad jokes” the way my friends often joked about or even missed the days of fishing. In some ways, I had become more calloused in my attitude toward the situation — with time, things harden even without realization. Time does things to memories, our hands, and things we cannot even touch.

Deep down, I had always known the reasons my father left. “It's for a better life,” “It's so they can put food on the table,” “It's so they could keep me off the streets.” My eyes shifted in and out of focus as I peered toward the abyss the falls gushed into. I looked at my father standing beside me. His face was hard but also soft, lips tight, back slightly bent as he leaned on the railings, and his hair grayer than I remembered. Acutely, I was struck by how old he looked and how I now towered over him. No longer was I the little boy who cried when he first left. Now, I felt like I both knew the man beside me, but also did not.

As we walked down the sidewalk, with Christmas lights illuminating the glassy path, I broke the silence, “It snowed during our last marching band performance, seems like it’ll be a cold one this year.” My father nodded his head in agreement. “We can ski, skate, maybe even go ice fishing. For the first time in a while, I saw my father’s eyes glow as they used to. With each stride we took, our conversation developed and our voices smoothed out like the falls around us. I never considered my father’s feelings and his situation. This didn’t mean that I had to invalidate mine. There were no winners in this hard situation. And so, with this thought in mind, we wandered away from the falls. As we meandered to our car, I told my father that my favorite food was Mexican. 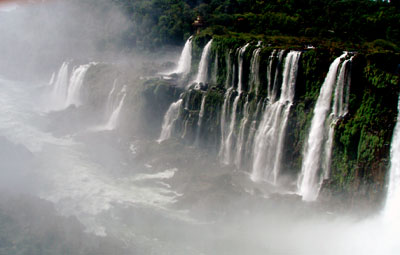