Itwas eleven o'clock and I should have been in bed an hour and a half ago. Aproject was due the next day, though, and my dad was helping me with thefinishing touches. The light was dim and we were both tired, but we did it,together. I always got the impression that my third-grade teacher didn't like metoo much, so anything I did for that class had to be spectacular. My father isthe one who helped make my assignments works of greatness.

My fatheralways has time for me and my brother. Even when he's tired or not feeling well,he helps us. Since I entered school, he's always had comments and critiques, andeven when I didn't want to pay attention to them, they helped.

Not onlydoes he have time to help me with schoolwork, he also has time to fool around andhave fun. He was a Little League coach for seven years; he started when I wasfour and ended coaching my brother just last year. Though I stopped playingbaseball a couple of years ago and play hockey now, he's always there cheering uson. He comes to as many games as he can because he loves to be with us.

Myfather recently retired from being a teacher, so most of the time he knows whathe is talking about. He always tries to give me the best. My dad taught in aneighborhood that was kind of rundown. He was in charge of the drop-outprevention program. Because he wanted my brother and me to have more than thekids he saw every day, we did. He always bragged about us to his colleagues,probably excessively at times, but I guess he didn't think so. Every once in awhile my brother and I went to his school, and as soon as we entered his office,someone would pinch our cheeks and say, "Aw, you're so cute. I've heard somany good things about you." This made us feel good and in turn made himfeel good, like he raised us right. 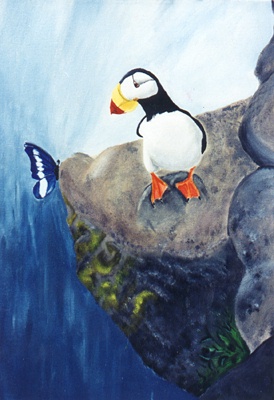