I Should Have Used My Head | Teen Ink

I Should Have Used My Head MAG

As long as I can remember I have enjoyed playingpool and gambling, though the two don't always go together. The cracking ofsinking balls makes you want to play more, and the feeling of beating someonemakes you feel great. It's just fun, especially when you win.

One day Itook pool beyond fun and paid in more ways than one. I was with my dad at a clubto watch him in a pool tournament; he won $1,200. I was 12 at the time andthought, Playing for money - what a concept! I started to shoot around by myself.Some guy I had never seen asked, "Hey, son, want to play a game ortwo?" I jumped at the chance and asked, "Want to play for money?"

He replied, "How much do you have?" I told him I had $50 I hadbeen saving from my allowance and he bet me five, which I thought was great. Iwiped the table with him and thought I had given him the lesson of hislife.

He then asked if I would give him a chance to win back his money.Again I jumped the gun and opened my mouth a little too much and said,"Let's make it worthwhile and go for $50."

"Sure you can lose, but if youwin, you're $50 richer and have nothing to complain about," I replied. Hereluctantly took the bet and I didn't even stop to think why he had taken such abig chance after losing so badly. He racked, broke and knocked in two balls rightaway. He followed up with three more before he finally missed. I was shocked, butmy ego came back and I thought I would clean house and win money from this idiot.I knocked in two stripes, but missed the next one. He shot the rest in, includingthe eight ball, and collected my money. Then it dawned on me - I'd been hustled.I should have used my head, but I didn't. Instead I'd had my ego crushed and,even worse, lost all the money I had been saving for weeks. I couldn't believeit.

He went to the bar and I, unaware my dad had seen everything, couldn'teven think. I was quiet as Dad ap-proached me, hoping I could play things offuntil I could think of a good excuse. He played dumb and asked, "Where'syour money, Michael?" I pretended I didn't hear, but when he asked again, Ifinally spit out my story in fear. With a stern voice he said, "What did Itell you about gambling?"

My obvious answer was, "Iforgot." You can bet that wasn't the end of it by a long shot. I had a lotmore coming.

A few minutes later Dad approached the fellow and asked,"How about a game?" The man asked if he was any good and Dad said hehad played a few times. So my dad said, "Let's bet $10." The guy wentfor it and beat him. My dad said, "Well, hey, what about another game so Ican have a chance to win my money back?"

"A hundred bucks, man, come on, what do you have tolose?" my dad said anxiously. The guy's eyes lit up as mine had earlier andhe, of course, went for it. My dad broke, hitting two in simultaneously and thenone after another. The guy didn't understand what was going on. He then crackedthe eight right into the corner pocket. The guy's jaw dropped as the ball wentstraight in. He opened his wallet with amazement and handed the money over,realizing he had been hustled.

We went home and I expected to get my moneyback, but I had another think coming.

"How much did you bet?" mydad asked.

Hesaid sternly, "You bet $50, so you're grounded for 50 days, and then youmight get your money back." Well, my mouth dropped again, but I stayed quietand just took it.

I had learned my lesson about gambling - never bet infront my dad. I still bet whenever I get the chance and get a good feeling when Iwin, though most of the time the feeling is wrong and I have to empty my walletjust like I did that day. 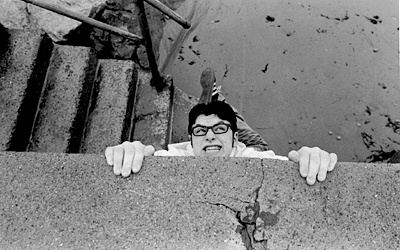