SpongeBob Squarepants and My Sister the Amazon Woman | Teen Ink

SpongeBob Squarepants and My Sister the Amazon Woman MAG

Youcan only watch "SpongeBob" if you eat five bites of corn, because youare five years old," I informed my sister.

"That's nofair! You're not my third parent! Mom and Dad make me eat three bites. The bitefor your age rule only works for meat. Ask Dad!"

"Dad isn'there, Emily. So, I guess I can't ask him. Looks like you're eating fivebites."

She ended the fight as she spitefully shoveled in five of thesmallest bites possible. "Ha! Hellooooo SpongeBob!"

It was myfirst time watching my little sister for an entire evening. My parents were at abirthday party for a friend and I, at the mere age of 13, felt as if I was on topof the world's tallest peak. I actually got to make dinner. I think it turned outpretty well; I am quite a talented chef. My masterpiece certainly showcased mygift as the TV dinners were microwaved to perfection.

Well, in reality,they were partially frozen. What made things go from bad to worse was that Icould not put the dinners back in because they were burning. I could smell thepoorly manufactured macaroni and cheese revolting against its artificialpreservatives.

To redeem myself I found a bag of frozen corn and a packof hot dogs. Luckily, my sister liked hot dogs better than TV dinners - at least,that's what I told myself. I did not tell my parents about the dinner mishap.They were very nervous about the evening as it was and I'd received very specificinstructions.

"Don't forget to brush her hair, and please turn theheater on once the sun goes down. Don't let her watch too much TV, but let herwatch some, it calms her down. If she fights about bed, try giving her a glass ofwater, she'll probably ask for one anyway. If any of her little friends come,tell them she can't play. She can talk to them at the door, just don't let her goout to play. But if Sarah from two doors down comes over, give her this bowl ofsoup for her mom. Her mom has the flu. Don't let Emily get the flu. In fact,don't let her talk to Sarah. Germs travel fast. Don't even answer the door ifit's Sarah." My mom rambled on as if she were preparing for a tour ofduty.

I had never realized how much work it takes to get the housetogether for just one evening. When my parents raised their voices for my sisteror me to go to bed or to finish our dinner, it was for our own good. I foundthrough baby-sitting that it is hard work - loving, but hard.

As soon as Isaw my parents pull out of the driveway, I went to find Emily. She was jumpingaround like an irritated, paranoid chimpanzee on speed and I saw the eveningahead flash before my eyes like an oncoming train. It wasn't pretty. Shewas soaring from the couch to the chair, singing the theme song to"SpongeBob Squarepants" at the top of her lungs.

"Who livesin a pineapple under the sea?" She somersaulted on the coffee table."Get down on the deck and flop like a fish!" She used the recliner'sfootrest to propel herself like the circus man in the cannon. "SpongeBobSquarepants! SpongeBob Squarepants!" The rhythmic song was beginning topulsate in my cranium as I surveyed my sister turning the living room into are-creation of the final battle of the Civil War. I could see my evening growingscarier and scarier.

"Stop, you Amazon woman! Did you take hyperpills? Mom said you should take a shower before we eat so you're ready for bedafter, okay? Let's go."

"What's an Amazon woman? And what arehyper pills?"

"I'm not answering any questions until I see acleaner Emily. Now, get in the shower." I felt a sharp pain in my belly.Someone was trying to escape. He was trapped inside and stabbing a hole in thelining of my stomach to climb out. He was getting close. I reached in and lookedhim in the eye. It was a demon, a very ugly demon I have feared my whole life. Itwas the authoritative nature of my parents. Huh? I was becoming my parents.

I had never been to a water park. I did not know that my baby-sittingtime would lead to one. After my sister had been in the shower for what seemedlike eternity, I went in to tell her to get out. When I knocked on the bathroomdoor, my sister shouted, "Miles, come in." Thinking that she had hurtherself and my baby-sitting career would end with Emily lying in the shower withher chin gushing blood, I ran in only to be squirted by a super-soaker half thesize of her body.

"Ahh! Where did that come from?" I yelled,wiping my face (and entire body) dry.

"I got it from the garagecloset, for a bath toy. Ha, ha. Didn't know, did ya?" she responded,nonchalantly.

"Get it out of here, you Amazon! Are you done? You needto get your pj's on, then we'll eat, okay?"

"It doesn't matter. Just put your pj's on." Thedemon in my gut was itching to become unconstrained.

Then came the battleof the meal. Now, it might have gone a little smoother if I had not been mentallyhandicapped when heating the TV dinner. But I covered well. Emily seemed to enjoythe back-up hot dogs, but I guess I was trying to be too much like Martha Stewartwhen I decided to make a vegetable, if frozen corn counts as a vegetable. Itwasn't that it was gross or prepared poorly, just that Emily wasn't particularlycrazy about corn. But I found that out the hard way.

While absent-mindedlyenjoying my hot dog, I felt something hit my head. At first I thought it was myimagination, so I ignored it. But after several more times, I reached up and feltfive or six kernels of corn in my hair. I looked at Emily. 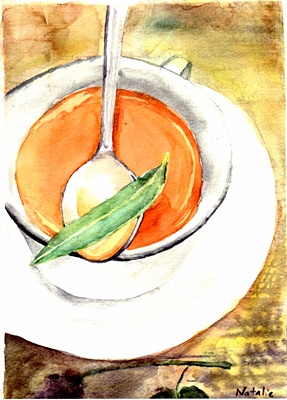