Entering the apartment was like walking into a maze. Books, newspapers and magazines were stacked into giant obstacles that towered above me. These walls of books were so densely packed that when I ran into one, rather than knocking it over, I bounced off.

My grandfather thinks that the number of books you have is equal to the amount of knowledge you possess and therefore, we have books on almost every subject you can think of, from The Secrets of Acupuncture to Microsoft Office for Dummies. But unlike libraries, my grandfather doesn’t need catalogs or librarians - he knows the name, author, and where to find every book. Yet even with his massive collection, he still spends hours in bookstores. Most of the time he’s not there to read or buy, but just to be in their presence. Whenever we pass a bookstore, he makes us wait while, with a deep breath, he takes in the scent of new books before continuing.

It wasn’t until the apartment was renovated that he agreed to get bookshelves. Shelves held far fewer books than the floor, and as a result he had to move half into his office at work. The remaining ones still manage to fill nine bookshelves. He refuses to throw any away, and not only does he care about his books, it seems like any printed material is under his protection. When I tried to throw away old magazines that had accumulated in my room, he caught me on the way to the dumpster.

“What are you doing? Those are not my books, are they?” he half-screamed.

“Junk? When I was your age, I had to bike for over an hour to get to the closest store. People back then would be happy just to smell the aroma of books, and you’re throwing them away?” I was given a chance to escape and avoid further embarrassment when my grandfather started engaging in conversation with other older people who’d gathered around the dumpster about the trend of increasing ingratitude in my generation. So rather than taking them to the dumpster, the junk from my room made its way into my sister’s.

You can pretty much trace the development of the human race from the contents of my grandfather’s bookshelves. Walking into the room, you would find the first shelf filled with books like Echoes of the Ancient World. As you progress past the third and fourth shelf, you start seeing things like The Treatises of Locke or The History of Flight. By the time you get to the end, you will encounter a decent collection of videos. To help advance my grandfather in technology, I tried to have him digitize his library. The online collection of free classics would probably replace a quarter of his books but after trying to read The Art of War on the computer, my grandfather rejected digital books with disgust. The fonts made him dizzy, but more importantly, the computer didn’t have the smell of books.

When I found out that I would be moving to San Francisco, I thought that my books and I would be free from my grandfather’s oppressive jurisdiction. But this was not so. He managed to find so many occasions to send us books that we created our own maze in the basement. When he heard that my brother was interested in the violin, he promised to send us some of the books he had on the subject. Not wanting to argue with him or hurt his feelings, we accepted. A few weeks later, a package arrived with 50 books on the theory and history of violin and a little note: “Here’s what I can find so far. If you want more, I can start looking in the office.” 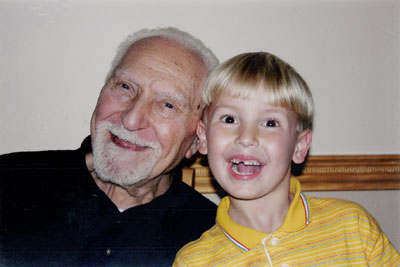