The process of development of adolescents begins at the pituitary gland, also known as the base of the brain. The pituitary gland produces hormones. In males, the glands are called testes and females have ovaries. When the glands shoot through the body, it causes the child or adolescent to go through series of emotions. When a child goes through puberty, emotions get more complex and he or she struggles to find their identity.


Moodiness in adolescents includes conflict with peers, recklessness and risky behavior (Arnett, 1999). Stanley Hall, an early adolescent researcher calls this behavior “storm and stress”. Research has shown that adolescents have many more signs of storm and stress than any other age group. In early puberty stages, are linked to increases to the sensitivity senses, which can trigger increases in negative mood (Brooks- Gunn & Warren, 1989). However, hormonal changes are likely to be predictive of moods if they are combined with bad or negative life events. Moodiness in adolescents are linked together with changes in close relationships.


Adolescent girls are most likely to experience depression than boys. Girls face more challenges to their self esteem than boys do. (Petersen, Sarigani & Kennedy, 1991). Research shown that by age eleven, children are to believe that the female role is less important than the male role. Although both boys and girls are concerned about their body image, girls tend to be more worrisome toward their physical appearance. Girls are more stressed because of sexual desirability. Female sexual behavior is judged harsher than male sexual behavior. This is called the traditional double standard. Another reason for a more likely depression period is because after puberty, girls and boys tend to interact more with member of the opposite sex. The differences in their styles can create more stress for the girl (Leaper, 1994).


During puberty, adolescents often struggle through an identity crisis. The reason being is because during puberty, the way the child acts will determine how they will become as adults. There are four identity status categories. diffusion, moratorium, foreclosure, or achievement. In the diffusion state, the child lacks both exploration and commitment. The child is not involved in making life choices or if they have, has not made any firm commitments to them. This usually happens during the early stages of puberty, although it can continue to happen throughout adulthood. In the diffusion state, the person lacks optimism.


In the moratorium state, the child also lacks commitment, but they strain for the future. They demonstrate drastic changes in mood and goals. They are considered inconsistent. In the state foreclosure, is a category of adolescents who make commitments with hardly any thought. Their commitments are premature. An early marriage is an example of this. Identity achievement is a group of adolescents who has been marked by exploration and commitment to certain alternatives.


An adolescents’ search of a social life is very much affected by the social world today. People around them influence what they want to be and what they do not. Erikson (1968) says that peers are important when adolescents try to search for an identity. The reason why is because during puberty, the body changes in appearance, hormones get out of control, and maturity demands increase. Seltzer ( 1982) calls this frameworklessness. Children from the ages of 10 to 16 were asked questions about their relationships with parents and agemates. Most of them resist peer influence.

There is a process of attribute substitution. This is when adolescents need to borrow and try on different behaviors. They imitate things that they see people around them to, and experiment to see if they like the persona or not. Research shown that adolescents are strongly influenced by their closest friends. One or two best friends has the innermost circle, while a clique with six or more people in it forms a less intimate circle.

How are adolescents influenced by their crowds? Seltzer ( 1982) says that teens are willing members of their crowds. They are motivated to borrow from others and they serve as models from the people that others borrow.Parents are also a major part of an adolescent’s growth. However, they tend to prefer to go on without them and have independence. A recent study indicates that conflicts with parents occur more in the early years of adolescents. For teens and preteens, gaining control of their personal life increases drastically and is an important identity issue. However, some of the behaviors that adolescents see as “personal” the parent may see as conventional because the behaviors have serious consequences for the child’s future. In 1996, The Carnegue Council of Adolescent Development said that “altogether, nearly half of American adolescents are at high or moderate risk of seriously damaging their life chances.” Increasing risks includes greater use of drugs, higher suicidal rates, lower academic achievement and decreasing age of first intercourse.

Risky behaviors of adolescents have increased recently. Stats show that four fifths of adolescents have experienced some police contact in their teenage years. A major portion of adolescents has already changed their lives over one mistake. ( Boyer, Shafer, & Tschann, 1997). Roughly two thirds of sexually transmitted diseases in the U. S involve adolescents and young adults. For preteens and teenagers to possess the “adult status” they mimic the behavior of more advanced peers from others to affirm personal independence. Engaging in risk taking behavior can be good and bad. Reckless behavior can encourage freedom of expression. Adolescents is the life stage that has the highest overall level of risk taking.


Steinberg (1994) found that parents of adolescents go through a perilous transition and 40 percent of them go through experiences of powerlessness and rejection when their children become adolescents. Commonly, they don’t know what to do.Young adolescents begin to seek opportunities to be in mixed- gender groups ( Bell, 1988) Research showed that adolescents are moved into sexual behavior because of pressure from partners or their peer group. Homosexuality results when something goes wrong with the identification process, therefore, it is important for peers to help the child with their search for an identity.

Adolescent often feel pressure from the people around them. Drinking and driving is another risky behavior that has increased. Pressure of having Drugs has also took it toll on adolescents. In 1997, 30 percent of children fourth through sixth grade reported being
offered drugs. 28 percent of high school seniors admitted they tried alcohol at least once
during the previous two week period.

A successful child usually has positive interactions around them. Friends, school, parents, peers, and social life all effects the child. It takes a village to raise a child. Since risky behavior increases sharply during adolescents, independence and a watchful eye is needed. During the adolescent years, children gain independence and a peek of what the real world is like. 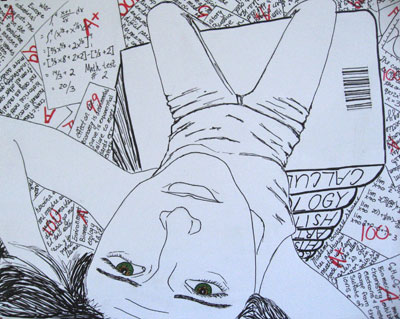 The author's comments:
This was a punishment for talking back when I was 12 years old.
Post a comment
Submit your own

Yhalainen BRONZE said...
on Mar. 23 2013 at 7:37 am
Yhalainen BRONZE, Edinburgh, Other
2 articles 0 photos 9 comments
View profile
You have clearly researched the topic well and you have an excellent and sophisticated style of writing. I like the way in which you have approached this topic.