Two lopsided silhouettes stand, side by side, on a canvas of cold pavement. The rain crawls across the earth, tapping gently on the umbrella hoisted over their heads. Her hands are soft, and the child’s hands are packed inside a pair of gray mittens.


The child looks up at her with wide eyes. The city flows around them, cars putzing along clogged roads, people milling past one another without a second glance. Above teetering skyscrapers is a gray watercolor of clouds, and past that, clear skies, touched only by glistening sunlight. Even further above is a mysterious emptiness peppered with glowing orbs of light circled by other worlds. And down below it all on a mere dust speck of space, they stand, and the child looks up at her, and shrugs.


She laughs, words tinkling as she nods, “You don’t know.” Her eyes are smiling when she glances down at the child, squeezing a mittened hand. “Well, I suppose you don’t have to. Not yet anyway. That’s the best part about childhood, I guess. You don’t have to be anything.”


The child scrunches up their nose and shakes their head. “No. I like being everything!”


This time, she doesn’t laugh. In fact, she doesn’t seem to have heard the child at all. She stares at the blinking red hand propped on the opposite side of the street, telling them to wait as it counts down the seconds. Her expression wilts, a flower dropping its last petals.


Eventually, she says, “Yeah. You would.” The rain taps softly on their bright red umbrella, and the woman hugs a coat around her body. The child stares up at her, brow furrowed. Then, she adds, “You should, of course. But the world doesn’t like that. Everyone has to be something. …Even you.”


“Uh-uh,” the child contests, jamming their free hand into the pocket of an oversized coat. “I get to choose, and I choose to be everything.”


The woman blinks, then turns to the child with a frown. “It doesn’t work that way. You can only be one thing.”


“No! You can’t!” The woman scowls, clutching the child’s hand prisoner. She straightens, fixating her glare on the indifferent red hand and its eternal countdown. “You live your whole life thinking you can choose, but you don’t, in the end. The world chooses for you.”


The light flickers, then morphs into the silhouette of a walking figure. The woman’s shoes click against the pavement as she drags the child across the wet road, umbrella bobbing overhead. A million other people wander along the roads, waiting for their light to turn, while the pair steps onto the sidewalk. They slink along the streets in silence, the woman sulking under her tan coat, the child frowning and confused and fighting tears without understanding why.


She stops before a chipped green door, and digs into her pocketbook. Rain taps against the bright red umbrella propped on her shoulder. The child stands, silent, as she finds the key and jams it into the lock. It clicks. Releasing a sigh, the woman shoves the chipped green door open to reveal a dim hallway and rooms tinted with mold. She steps inside, folding the umbrella.


The child stays. “It doesn’t matter,” they whisper to themselves. “I’m still me, no matter what I do.”
The woman, realizing her absentee, turns on the child with a frown. “What is it? Get inside! You’ll catch a cold if you stay out there.”


“You asked the wrong question!”


They scowl, grabbing the red umbrella out of her hands and tossing it to the floor as they stalk inside. “It doesn’t matter what I want to be when I grow up. It’s who I want to be.” They pause, glaring up at the woman. “And I’m going to be me!”


With that, they run up creaking stairs, leaving the woman to gape after. The red umbrella lies, abandoned, by the threshold. The chipped green door is open. Outside, raindrops tap against the pavement. The city hums around them, cars stalling and people shuffling, and above that the sky is gray, and above that it is clear and crisp and glowing, and past that is a mysterious void with new worlds and new suns. But below it all the woman stands, and thinks, and frowns.


She sighs, the soft and wistful kind of sigh one has when they’ve just remembered something they had forgotten a long time ago. Then she steps over the bright red umbrella and closes the chipped green door.


She locks it behind her. 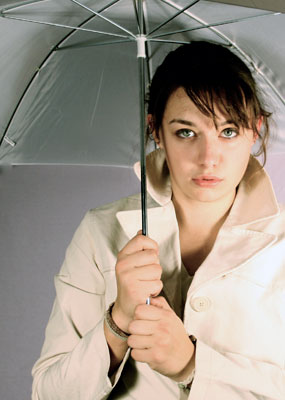