On Our Shoulders Now | Teen Ink

On Our Shoulders Now MAG

The other day as I searched for a place to dispose of my plastic water bottle, I noticed something strange at my friend’s house: there was no recycling bin. That’s funny, I thought. Maybe it’s just in a different part of the house. I asked her and she just shook her head. Her family did not recycle. Her mom thought it was too much of a hassle.

I was dumbfounded. I had grown up in a house where for as long as I could remember, taking out the trash included the recycling bin. As I walked to my car to drive home, sadness and frustration overwhelmed me. It’s people like this, I thought, who are harming this beautiful earth! I was disgusted that someone was simply too lazy to recycle. As I pulled into my garage, though, I paused. My friend’s mother is a single parent taking care of two kids while running a business, leaving little time to be concerned with other things.

It was at that moment I had another realization. I looked at the car I was driving: a Lexus SUV. My parents had bought it because it was a dependable used car; they were looking out for their family too. That is when it hit me: the younger generations will really make the difference in taking care of this planet by acting and insisting on change, not by fixating on blaming the generations before us.

We live today in a culture where picking up trash is considered a community service. Why don’t we do this naturally? Many people must pay extra to have their recycling collected with the trash. Why is it not the priority item to be picked up? We live in cities clouded by smog. Why don’t we have efficient mass transit systems? More importantly, though, why hasn’t our society demanded such things?

The people today who make the world go around, and keep communities running are working to do just that. They are functioning to simply keep themselves and others going. They have little time to make the extra effort to “save the world.” This does not mean they are blameless for not doing their part, though. But the responsibility cannot solely be on their shoulders. We need a society that demands change. It is up to us to raise the expectations! We must take on this responsibility.

Our generation is ripe with energy and action; it is our duty, our prerogative, to demand change from ourselves and others to save this beautiful planet. We first need to look within to change our behavior and act in an environmentally friendly way before we demand it from others. Today we hold the only viable power in this battle against time to save the earth from destruction. No longer is the thought, I am too young; I can do nothing, a credible one. There is no room for excuses! There is no time to hold back!

Next time a friend throws her soda can in the trash, stop her. If nothing else, take it home with you to recycle. Next time your parents plan to buy a car, discuss what they can afford that is not a gas-guzzler. As Gandhi said, “Be the change you wish to see in the world.”

A few days after I expressed disappointment in the lack of recycling at my friend’s house, she surprised me. I told her I was having trouble fitting the empty milk gallon in the trash can. “That’s okay,” she said, taking it from me. “I have a recycling bin in my room now.” 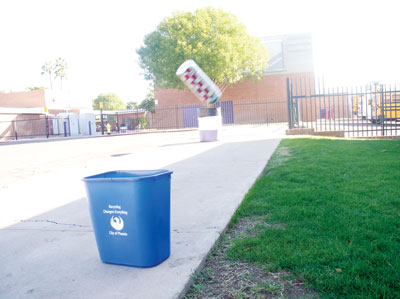