The mongoose has nothing to do with the goose. Its name comes from the Anglicized version of its Marathi name, mungus. Its plural, therefore, is not mongeese, but simply mongooses. Its name mirrors its appearance, the long oo sound slinking from the little hole the mouth makes just as a mongoose slinks out of its burrow. Although its lengthy body and stubby legs make for an almost comical image, the mongoose moves efficiently, ugly yet graceful like a boxer in the ring. When it walks, its paws lift up completely, each step a smooth arc. The muscles of the mongoose's sides undulate like water; its spine stays parallel with the ground. It darts and dodges when fighting, narrow jaw hanging open. Its back arches, it fur bristles, and it assaults its enemies with a shrill battle cry. The mongoose does not back down. The mongoose either bands with others in a swarm surrounded by a defensive padding of bodies, or navigates the world alone. During mating season, males will trot after the females, panting, begging and whining. They hiss, bristle, and swipe at competitors to keep them away from their target female. The strongest males' lines will continue, but the weak cower in the dry grass and die pup-less. After everything is settled, hormones hushed, the mongoose mothers coordinate the birthing to happen on the same day, which discourages foul play. Alliances must be formed, because the mothers will do what must be done: either kill others' pups, or cooperate so their own can live. The mongoose eats a nondiscriminatory diet of anything it can find crawling, hopping, slithering, creeping, pattering, dying, or dead on the ground. It will filch a crocodile egg, and it will dine on carrion. It will gobble down fallen fruit, and it will snap up a small bird. It can even stalk, provoke, and kill a cobra. After thousands of years of weaker ancestors succumbing over and over again to snake venom, modern mongooses are now resistant to its paralyzing effects. Because of the mongoose's incredible ability to scarf down every pest known to man, humans, in all our brilliance, believed we could use them to control pest populations. We attempted to domesticate the mongoose, a chittering, screaming animal that is driven only by its instinct for survival. We let them loose in sugarcane fields to kill the nighttime rats, but we didn't realize they would kill all our pretty daytime birds. In fact, the mongoose never met the rat; each slept while the other was awake. We call the mongoose an invasive species. It runs amok in the sugarcane islands we moved it to, slaughtering and surviving because there's nothing to eat it and too much for it to eat. It is such an efficient killer it's endangered multiple species. It has proliferated into overabundance, overrunning and spreading like the plague. It has caused us grief, worry, stress. We say we need to control it, exterminate it, stop it from driving the other animals to extinction. But it has only done what every creature is born to do: use every advantage available to continue its species. That is the most primitive struggle. We are hypocrites. By our definition, are we not an invasive species too? Don't we need to be controlled? Exterminated? Stopped from driving to extinction the Sumatran elephant, Bengal tiger, black spider monkey, monarch butterfly, bluefin tuna, Amur leopard, vaquita, western lowland gorilla, Yangtze finless porpoise, Asian elephant, leatherback sea turtle, fin whale, chimpanzee, Galapagos penguin, sea lion, dugong, red panda, polar bear, and Irrawady dolphin? Like the mongoose, we don't consider other lives in our haste for euphoric survival, sophisticated living, hedonism. We steal and tame forests, grow fat on the meat of dewy-eyed livestock, and choke the blue-green earth with our mud, smoke, and smog. It's an elaborate version of the most primitive struggle, but it is primitive nonetheless. Like the mongoose that overran the sugarcane islands, we are overrunning the world. Like the mongoose killing the beautiful birds, we are slaughtering animals and forests. Like the mongoose, we are winning this vicious race for survival. 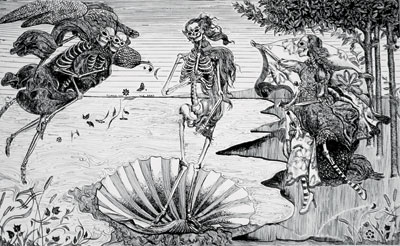