Helping out at Food Bank is a rewrding experience | Teen Ink

Helping out at Food Bank is a rewrding experience

Let’s face it, community service possibilities are everywhere but it can be hard to find an organization or association that interests young people. Each institution has different goals such as helping the poor, aiding underprivileged minorities, and improving the environment. Before volunteering, I looked on the internet to find non profit charities in the city of Los Angeles but none interested me as much as working at the Food Bank.

The Los Angeles Regional Food Bank debuted in 1973 by one brave man: Tony Colier who has made it possible for handicaps, senior citizens, students, and the needy among others to eat at heir hunger when in difficult situations. Today, the Food Bank has “900 agencies all around the LA County” and counting. There mission was simple but I had no idea in how much they needed volunteers.

The first time I went to the Food Bank, I was very anxious as to what I would do and where to go since the building was boundless. The workers there were very kind and directed me to the entrance. At the moment I entered the construction, I looked with awe at the aisles and aisles of fruits, vegetables, and delicious treats. The fact that the food was distributed to those who needed it most filled me with joy knowing that I would participate in building a stronger Los Angeles.

I worked fifty hours at the Food Bank and it was all worth it. The tasks that were given to me were basic and fun. Dozens of consumable items were put on the conveyer belt and all I had to do was put each item in a specific box for it to be sent to different centers full of people in need. From this experience I learned how to work as a team member and communicate with others whom I was
n’t familiar with. Working together increased the number of goods in boxes but also made the job a lot easier.

Working at the Food Bank, I met a lot of cool people such as students, choirs, members of churches, business employees, and teachers. From each of them, I learned something new and got the job done faster. The Food Bank employees also had interesting things to say which brought me to understand how it felt to live in unsafe environments like South LA. Everyone who volunteered there was unique and special because they worked long hours to do what was right: helping each other out in a difficult time of recession.

I had a lot of memorable times at the Food Bank such as: when the employees were singing songs of hope and dancing to different genres of music and working at the same time. Also, I had the chance to see a reality show being shot two feet from where I worked. At first I thought it was strange because I didn’t think celebrities really came down there to offer their support. But then I learned from my surroundings that numerous TV stars and famous people came there such as: Oprah, Laila Ali and the cast of The Biggest Loser which was truly amazing.

The important message to teens, though, is to get out there and show their support in any way possible because every bit counts and you might learn about a cause you didn’t know about in the past and will leave you with a satisfying feeling of having been a part of making the world a better place. So be it a human, an animal, a cultural, or an environmental organization, there is no time to lose because community service is the most rewarding experience. 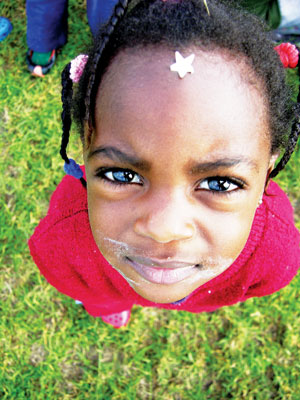 Favorite Quote:
If Slaughterhouses had glass walls we'd all be vegetarian. - Linda McCartney