Everybody avoided the tall, old and wooded house behind the abandoned broken apartment, even the police. People say it’s been empty for year’s even centuries. They say one person went in and never came out.  I’m Mike, I’m in 4th grade and I live really close to this wooden house. Father says it’s haunted with ghosts and werewolves. My mother says it’s an ordinary house like other houses. I say it’s a mysterious house, not haunted or an ordinary house.

It all began on Saturday a boring Saturday; it was cold and raining and I just stayed in my room. Later I went downstairs to my mom and asked if she could drive over to my friend James and pick him up to come over and play.

“But its two blocks away you can just walk”, moaned my mom. “Why do you think people have feet?” she threw both arms in the air.

“To work the peddles of the car”, I said, angry and annoyed. She walk over to where my rain coat was, near the front door, then she took it off the hanger and handed it over to me “here you go’’ she said not even caring about what I said. I grabbed it right out of her hand and looked at her in disgusted way, then turned around and walked out the door.
I hugged myself trying to keep warm. When I got to James’s gate I faced to look at the wooden house behind the abandon apartment then I opened the gate and started walking towards the front of his house and up the short stairs on to the wide and gray porch. I stood facing the door, slowly I raised my arm up and pointed my finger for the doorbell then I pressed it, DING DONG the doorbell went.  I heard footsteps’ running towards me, then the door was jerked opened by James’s little sister, Sarah, who looked very happy and disappointed.

“Could you call your brother Sarah?” I said in a slow voice, shaky voice because of the cold. Sarah just turned around and screamed “James!! Mikie needs you!” I heard his footsteps go one step after another. Then I saw him slide down the rail of the stair.

“Hi’’, he replied out of breath. Soon after greeting each other we headed out the door. Down the porch out the gate and on the path we started to my house. We didn’t talk for a while, and as we didn’t I saw that James had something to say to me, and quick as a flash James tuned to me and said, ‘’Did you hear about that wooden house? Someone found huge bones the length of both your legs on top of each other’’, I could hear the excitement in James’s voice.

“Cool”, was all I could manage. Then I thought of something he might have liked.

“I’ll race you there’’; I said looking at him with a smile across my face. Before I knew it he just took off like a rocket then I followed behind.

We stopped a few feet away from the house. It was so silent; you wouldn’t think it was even there, the tall, murky trees around it, dangled and swayed as if waiting for something, waiting for us. The wind was slightly harsh, it also was like it was pulling in. I could hear James breath right beside me, it was heavy and intense. Something about the house made me feel scared, or afraid, like it was waiting, like a monster about to consume its victim. We strolled closer to the house, it was more by force then by choice. We got to the front porch and peeked through the window that was blinded by blinds. The house it looked empty, but there was a light on inside, we followed the light with our eyes to find a single lamp flickering in the dark. That made us more keen to opening the door, so we decided to ring the bell anyway. We rang it once and no one came so we rang it again and still nothing happened. On the third try the door suddenly and slowly the door opened with a loud creak. But there was no one there to open it.

We looked at each other and carefully walked in. The door opened into a living room with stairs leading up, to the far left and there was a fire in the fireplace with a rocking chair across from the fireplace.  We looked at each other again because the rocking chair was rocking but there was no one in it! James asked me if we should go upstairs and I said sure with more confidence than I had.  As we walked up the stairs the wooden stairs creaked and one of them broke, and what looked like rats came scampering out of the broken stair. I grabbed James’ arm. Going up the stairs we called, “Bonjour, is anybody home?” We were so scared we used French from Mr. Dorey’s class.

On the top of the stairs we suddenly saw huge black spiders coming down from the ceiling, hanging on their webs, staring at us with all of their big black eyes. As we walked down the dark hall all the door knobs of the rooms upstairs started twisting left and right, the only light to comfort us was right across from, coming out a window, from a moon. I decided I had had enough and said, “Can we go now?”
And James said, “Sure, great idea.” When we turned around there was a slender build body in front of me. I looked upwards slowly and saw an angry old man’s face. He had one green eye and the other white, two scar’s one long and one short; he was wearing a suit, black and white and a black tie with black shoes. His back was hunched down.

“What are you doing here?’’ the old man said in a grumpy way.
“Nothing. We were just about to leave’’, I said pulling on James’s sweat shirt.

“Yeah. What he said”, James in fear tugging on my T-shirt, but the old man stopped both of us with his long and wooden cane.

“By the way, nice eye” I said, as we tried to slither past.  “Where did you get it’’, I continued but I realized that it was his real eye.

‘’I asked a question’’, he said impatiently.

“What do you want? I  Whined. “I’ll give it to you just leave us alone”.  I said going down on both knees begging him to let us leave.

“Yeah, leave us alone’’, said James. I was kind of annoyed that James was just mimicking me.
“I don’t want to hurt you’’, said the man. He tilted head showing that he was confused.

“Oh’’, I said getting up off the ground brushing off the dust on my leg.

“Then what do you want to do with us?” said James looking confused.

The man asked again, “What are you doing here?” We told him that we had heard that long bones had been found in the front of the house. ‘’Oh you mean the bones for the amusement for Halloween’’, said the man putting his cane by his side. Simultaneously James said “Halloween’’ and I said, “Amusement”. This didn’t make any sense. A house people avoided for centries, all to be used for a amusement for Halloween.

Then the man said, “Yes, Halloween is tomorrow, don’t you ever look at the calendar?’’. He handed us both special invitations for special people.

“Well, then I think it’s time for you two to be heading out’’, said the old man taking a deep breath.

“Let’s go’’, I said running down the hall. “we’re special people!’’, I shouted it out loud so that my voice echoed in the hall way. A question caught me by surprise, I turned around and asked. “How came everybody including the police avoid you and this place?

“I don’t know, but this house used to be a legend”, he pointing the cane at us. “And this house was haunted, or should I say, is haunted”. He smiled at us with a nasty grin, then started to walk away from us,  toward the window at the end of the hall. I turned and started walking, and then I turned back. He wasn’t there. It was like he just vanished from site.

Finally today was the day, Halloween. I dressed up in something odd; blue dress, with long blue sleeves that were long then my arms. I held a cane in one hand, a black witch hat but that was not what was I am. I was a wizard.
Once we got into the house we heard millions and millions of screams. A lady stood in a corner of the living-room.

“What if we go ask her?” I James asked leaning towards my head.

“Ok”, I agree. We walked up towards her and she gave us a little smile and greeted us.

“Excuse me, but we’re looking for a man named Smith”, James’s said. “He is the owner of this place”.

“Never heard of him dear”, she replied, she had a southern acsent. “But that’s the owner right there”. She pointed towards the porch, it was a man all dressed up in a suit and he was very fat.

“That’s not him”, whispered James in my ear.

“I know”, I whispered back. “Maybe they don’t know him”. James looked at me and laughed.

“How can they not know him”, he said. “I mean, he’s the boss of this place, and you think that they-”I interrupted him.

“Ok then! I get it”, I tried to calm him down but it was only making matters worse. Where is he? Or, did he even exist? 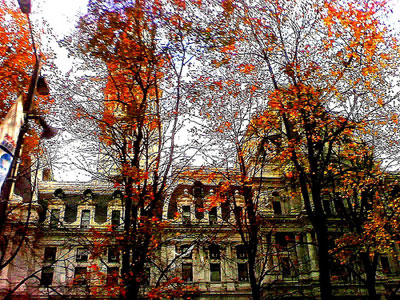