Not All Quiet Nights are Calm | Teen Ink

Not All Quiet Nights are Calm

Favorite Quote:
"There, there."

Santa Fe was unusually dark for a Saturday night. It wasn’t as if there were no people on the streets or no lights on in the buildings – there was simply less excitement, less life.

The warm air didn’t have even the smallest hint of a breeze, and there wasn’t a star in the sky on that moonless night. Anything could happen; all it would take was one finger on the trigger, one messed up drug deal, one DUI accident. The calmest nights are the ones that need to be watched closely. When things are calm, people get bored.

Antonio Santos sat behind the bar, serving up drinks as he had for the past seventeen years. The loud, pulsing music in the bar really got to his head. Not to mention the blinking neon lights and the loud shouts of angry alcoholics. He went over to the stereo to turn the music down, and was immediately met with shouts of disapproval from every direction. He had no power, no respect.

“Hey Tony, why don’t you hurry up and get me a beer?” said a guy with a thick Mexican accent. He was a regular, which meant he was either a gambler or a druggie. It also meant the guy had troubles. Antonio didn’t care about the troubles of other people. He could almost guarantee his were worse. He fingered his pocket for the bottle of poison he always kept, but never drank. He would use it someday. There wasn’t much to live for anymore.


FLASHBACK - 17 YEARS BEFORE
I was lying in bed thinking one very quiet night. I wasn’t tired. Mother and Father were arguing again. They weren’t mad at each other, they were just scared. I didn’t know why they were scared, and I didn’t ask. But that’s what I was thinking about. I couldn’t make any words out of the muffled whispers, and I knew it was rude to spy. But what could my parents be scared of? My answer soon came to me. There were two loud bangs on the front door. My eyes looked straight to my bedroom window. I had a clear view of the front door. There I saw a man with a rifle. My heart started racing as I threw the covers off myself and ran out of the bedroom. I ran down the hallway as fast as I could, tripped on my toy car, and got right back up. I arrived just in time to see the murderer shoot both my parents in the head. Mom, then Dad – both dead in an instant. I was only eleven years old at the time. The murderer stood in the doorway, his bald face and jagged teeth not even comparing to the wickedness of his yellow, demonic eyes. He came towards me, and I thought I was going to die too. But no, all he did was laugh and say, “remember this for the rest of your life. Let it haunt your dreams and your every waking moment. Take this to your grave knowing that if it weren’t for you, your parents would have lived.” In some ways, that was worse than death.


The door opened, awakening Antonio from the flashback that haunted him every day and every night. He looked up and his eyes widened. He couldn’t believe it. It was the man; the man who killed his parents. Antonio was stuck. He couldn’t move. He felt as if he had reverted back to his child self. He felt powerless. Antonio Santos wanted nothing more than to pull the gun out from behind the counter and shoot the man, possibly ending all this pain and misery. But he knew the gun was a fake. It was only there for show. Antonio ran to the bathroom and locked the door, taking deep breaths. There was no way he could fight this murderer. The most exercise he had gotten all these years was running between barstools. He couldn’t even shoot the man. He didn’t own a gun. But - but he could poison him. He could put the poison he had been saving for himself into the murderer’s drink. That would be the end of the monster that killed his parents.

Antonio stepped back into the bar room after exiting the bathroom. His breathing was calmer and he was determined.

“A Coke please,” said the man to Antonio. Antonio was surprised. He expected a more fearful beverage. Anyway, he got the ice from the tray, the soda from the fountain, and the poison from his pocket. His hands were trembling as he poured the vile of arsenic in the bottle of Coke, making sure no one was watching. When he turned back around to give the man his drink, he was sweating. The man took out his wallet to pay, and Antonio noticed a picture in the front space of the wallet. He saw it only for a brief moment, but he was sure it looked exactly like the murderer, even more so than the man who was right in front of him. The man opened the wallet again, realizing he hadn’t taken out enough cash. Antonio saw that the card said ‘in loving memory of Salvador Sanchez.’ But it was clear that the killer was right in front of him, not dead and gone. When the man reached out with his left hand for the drink, Antonio had yet another flashback. This time he remembered the murderer was right-handed. The man who was about to die was not the killer.

“STOP!” Antonio yelled at the man. The whole bar stared at him. The cup was almost near the man’s mouth, but he hadn’t drunk anything. He just looked at Antonio, surprised.

“Your brother killed my parents,” Antonio remarked amongst the silence.


Everyone left the bar soon after. The bartender left with the man out in the streets, and the substitute bartender was mixing up everyone’s orders. It was near midnight, and the two men went back into the bar to finish their conversation. No one was there at the time.

“I have one more question for you, Victor Sanchez, why did he do it? Why did he kill my parents?”

Victor sighed. “When we were little, our parents were killed because they loved us. They were killed by a jealous man who had no family, and wanted one desperately. Because of this man’s failures, he became sick and jealous of other peoples happiness. He killed in order to take that happiness away. My brother never got past his terror, and he followed that path. Now, hopefully, you can move on.” 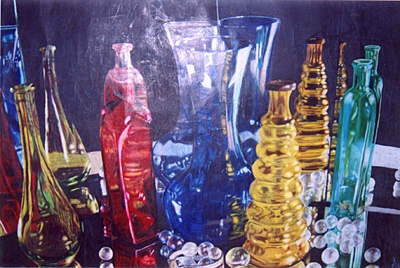 The author's comments:
Inspired by Breaking Bad and crime near the Mexico/U.S. border.
Post a comment
Submit your own