I will never forget what happened 7 years ago when I was only 8 years old. You see, my parents died in a fire when I was around seven. The only thing that survived the fire was my dolly named Chiara. My mom and dad brought Chiara as souvenir from their trip to Africa. I never paid her much mind till she was the only thing I had left to remember my parents by. Photographs, memories... our home burned down to ashes, nothing remained, but little Chiara. Chiara was all I had. She went from meaning almost nothing, to meaning the world to me. After the fire they sent me to an orphanage where I felt I didn’t fit in. Chiara became my only friend that I could confide in. Whenever I had problem with the other children I would go to Chiara and cry my eyes out. I saw Chiara as a way to speak to my parents. I talked and held conversations with Chiara on a daily basis, but I never imagined she’d... talk back. It was on my 8th birthday, almost a year at the orphanage and yet to make any friends. I was having a bad day after the big, fat, well- known bully named Beatrice ruined my little birthday gathering by putting worms in the center of my cake. No one knew until they cut a piece a cake and then suddenly, chaos, everyone starts screaming when worms start to fall from the cake. It was a disaster. I knew it was Beatrice when I saw her lingering in the shadows snickering and looking quite proud of her work. Also I should have known when I saw Beatrice in the kitchen so called “admiring” my cake. This wasn’t the first time Beatrice has terrorized me. Ever since I came to the orphanage she had always bullied me and turned the other kids against me. I was furious, this was the only day that I just wanted to go smoothly. Just one day, but Beatrice had to destroy my one moment of happiness. Enraged, I went to Chiara to blow off some steam.

“You want me to make her disappear?”
Came an eerie voice from Chiara’s direction.
?I frantically looked around my room searching for where the voice came from.

“Up here.”
The eerie voice said.
I looked up to see Chiara sitting up high on a shelf. In disbelief I ask the voice, “Who are you?”

When I hear the voice’s response a shiver goes down my spine. I couldn’t believe it... at first I thought it might had been a prank, but when I thought logically it was no way. There was no where for anyone to hide in my room and the voice was coming directly from Chiara. To make sure I grab Chiara from my shelf and sit her down directly in front of me.

“Yes, it is me, Chiara, now Sora, would you like for me to make Beatrice disappear?”
Said the eerie voice coming from the doll.

I started to shake.

“H-how is this possible Chiara?”

“I have always had a mind and voice, all this time I feared speaking to you because I thought you would throw me away, but now I know your mature enough to understand me.”

“No I am unable to animate this body... So Sora have you decided if I am to make Beatrice disappear?”

“Well what shall we do? She must pay for what she has done to you.”

“It’s okay, I’m not even upset anymore, I’m just glad I have someone to talk to now.”

“No! It is not okay, how long are you going to let her push you around, we need to put a stop to it. I have the perfect idea... Beatrice will bully you no more. Cut off all that lovely long black hair of hers, she then will no longer have the confidence to bully anyone.”

“You CAN and you WILL. How many times has Beatrice wronged you? This will make up for all of it. This is what she deserves. Do it for all the kids that have been bullied by her not only you. “

“Good, now you have to make sure you don’t get caught. I’ll wake you late at night when everyone is sleep. Then you have to go when I tell you without any hesitation. Right now I need you to go and get a pair of scissors out the art room, so you’ll be prepared.”

“Alright, I’ll be right back.”

I then left my room and headed to the art room for some scissors without a second thought. Luckily the art room was empty and the box of scissors was set out on a desk. A piece of cake. I was headed back to my room when I bumped into Ms. Cario in the only hall that lead to the art room. I tried not to look suspicious, by telling her I needed some glue for a project, she smiled and said it’s fine, but next time let someone know. When I made it back to the room Chiara asked, “Did anyone see you?”

“Yeah Ms. Cario, but she only thinks I went to get some glue for a project.”

“If she finds out we are going to have to make Ms. Cario disappear.”

“What do you mean Chiara?”

“Don’t you worry your little head Sora, I’ll take care of you.”

“Dinner time!”
I heard Mrs. Jones yell through the halls as she does as usual around this time.

I wasn’t in the mood for dinner, I wanted to continue talking to Chiara, but I had to go cause they always do a head count. So I grab Chiara and head to the cafeteria. I sat alone with Chiara as usual and quietly ate my dinner. After dinner, I retired to my room and quickly fell asleep with a full belly. Late at night my sleep is interrupted by the whispers of Chiara’s voice.

“The time is now Sora, go now this is your only chance to get your revenge.”

I tip toe my way out of my bed, down the halls, to Beatrice’s room. There I find Beatrice sound asleep. As I watch her sleep, all my spite towards her starts to disappear and I no longer have the desire to cut off her hair. I knew it was wrong in first place. I felt as if I was coming back to my senses. It was almost as if Chiara’s voice had me under a spell and I was about to do something that I was going to regret later. So I head back to my room without touching even a single strand of hair on Beatrice.

When I enter my room I hear Chiara speak.

“Where is the girl’s hair?!”
Chiara said in an angry tone.

“A teacher was roaming the halls, I couldn’t get to her.”

I felt as if Chiara was bad and was trying to trick me into helping her.
So I decided to get rid of her. I grab Chiara, take her to the field by the playground, put her in a small box and bury her a deep as I could dig.

As soon as Chiara was gone out my life, the next day I began to make new friends and Beatrice rarely even looked my way anymore. Two weeks later life was good and I had three new friends, I was content... till I was in the hall headed towards art class when I see a girl sitting in the middle of the hall talking to someone, when I get closer I realize that someone is... Chiara. I was so freaked out that I ran in the other direction. I wanted to warn her, but I didn’t want to have anything to do with that doll anymore. After that I requested to be transfered to another orphanage. Luckily my request was accepted. If not I would had been a victim in the fire as well. 10 days after I left the orphanage, there was a fire that killed everyone. The cause was unknown, but I had a strong feeling it had to do with Chiara.

Chiara wasn’t my friend. I felt something evil inside of her, that fed off my weakness of wanting a friend. Till this day I imagine what would had happened if I had listened to her. 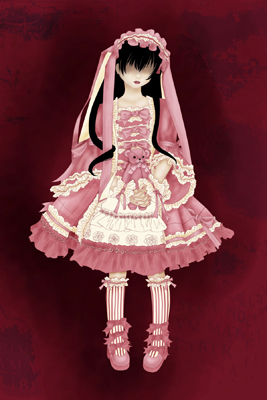