Favorite Quote:
New Moon - S. Meyer
'I flung my leg over the edge and ram through the knee deep water, it sprays all around me. "Edward!" I yell knowing it is useless. The crowd is too loud and my voice is breathless with exsertion. But I couldn't stop screaming.'

I picture myself in the black and white field again, everyone is there excluding family. My friends stand there with their flowers, frowns on their faces. They’re hopeful that I’ll turn around and look at them with a grin on my face, but life isn’t always exactly as planned. I planned not to reflect about them and to keep my back to them hoping they’d disappear. Then an unexpected companion arrived, he was always set apart from all of them, free to meander in and out of my mind as he pleased. “Turn around.” He tells me in a hoarse whisper and I am required to listen, his hands placed on my shoulders he makes me ogle into their eyes. They gaze back holding out their flowers as if it will help. Suddenly there is a firearm in front of me, its sends a tremor down my spine. “Pick it up!” He instructions me and I plunge to my knees in front of the gun, it’s as if I’m not even me to any further extent. I unhurriedly take it in to my hands and he lugs me to my feet. “Shoot them.” He whispers into my ear and I am compelled to take note. I hold the shotgun out in front of me, aiming at one of my acquaintances. “No.” I tell him, scarcely a whisper upon my breath. “Yes, do it now!” He growls at me through clenched teeth. Unwillingly my fingers draw back the trigger and the gun explodes. Bam! My friend falls to the ground, his blood splattering around everybody else a malevolence sinister crimson against the black and white meadow. Tears roll off my face and everybody else’s, their faces shaken in trepidation. End-to-end my friends go down staining the field in cold blood. Lastly my paramount two friends are left standing in the field, their faces are twisted in darkness and clemency. Kaitlyn and James stand in the field, I have enough self-control to make the gun waver between them. It goes off and they stand still, did the bullet miss? Are my best friends saved? Blood sprays off onto the grass, the bullet did not miss. James clutches his torso as a bloodstain appears through his shirt and then slowly he collapses to his knees then falls to the ground. “No! James!” The gun rises in my hands, as it aims at Kaitlyn, no. I feel the pressure as my finger begins to ascend on the trigger. “No.” I beg. The gun does not move and my fingers inch closer to the final pull. “No!” I scream. I turn around and I point it at my angel of death, I pull the trigger. Bang! He just stands there but then a trickle of blood runs down shirt. He falls to the ground and with a moan I know that the vision of him will no longer run through my head. I turn around and throw the gun out in front of me, death was different than expected. I run to Kaitlyn and I wrap my arms around her “I’m so sorry Riley, it’s hard to explain, but it wasn’t me pulling the trigger. I know you loved him Riley.” We pull away from each other and she looks at me smiling. “I know it wasn’t you, that’s why I must leave now.” She shakes my hand and then turns away from me. “What? No, Riley no!” She waves goodbye and then disincarnates, her ashes are swept away by the wind. The people vanish before me and I am left alone in the field with the gun. I pick it up aiming it under my jaw as I walk to the center of the black and white field that has been stained by the blood of my beloved friends. My mind engrossed in the last moments of my angel of death’s life, he would never be more than a friend, that’s all I was in his eyes. I draped my fingers over the trigger “Goodbye.” And with one final tug the gun goes off and the life slips out of me. I lay on the ground, no longer strong enough to attract the blackness. I hear a noise and open my eyes; my angel of death stands over me, crying blood. “You shouldn’t have done it, now I’m losing you and so is everybody else.” I close my eyes as my last and final breath escapes my lips, now I regret it. 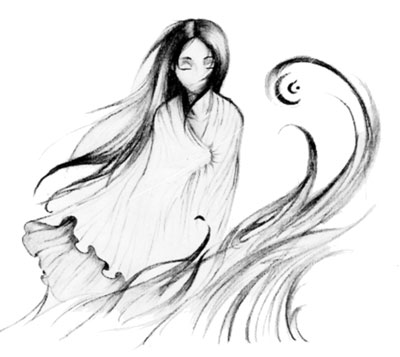