Not your average fairytale | Teen Ink

Not your average fairytale

You've all heard of the fairytales where the knight in shining armor comes to save his princess. but before he can do that he always has to go through different obstacles like fighting a dragon or crossing lava on a rickety old bridge. Right?

Well, this is a little different.

As the knight in shining armor on a black steed, as drak as night, galloped towards the castle a big fire breathing dragon stepped out onto the path in front of them. The steed whinnied and reared as the knight pulled back on its reins.

The Knight flung of of it's horse and pulled out its sword. After a thorough plan of what the knight wanted to do it swiftly moved in and cut off its head.

Instead of two growing back in its spot, a head of a beautiful prince peered at the knight. The dragon didn't proceed to do anything but just stare at the knight.

The knight being atonished at the sight, took of the helmet and put the sword away.

this being in front of the dragon mystfied him. It wasn't a handsome prince but, in fact a beautiful princess, with golden curls that fell around her shoulders when she took the helmet off.

The princess had to ake a decsion; kill her handsome prince or take him just the way he was. 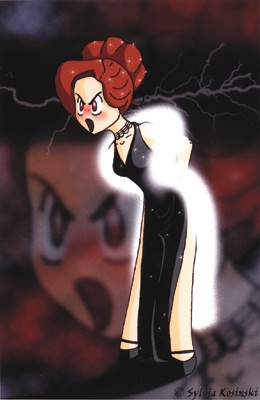