“I can't believe you thought I wouldn't find out, I've known you for too long for you to pull something like this. I've been watching you, Vanna, peacefully at first, but now it's MY turn.”

The shape in the corner grew, looming over Vanna in the shadows as it spoke again,

The shape leapt, and Vanna screamed as the shadows invaded her mind, taking over her limbs, her mouth, her eyes. If only she'd gotten rid of it when she could, if only! But now, it was too late...

Three weeks ago, she'd been sipping coffee in a cyber-café in Australia, working full time, and perfectly content. That's when she got the email. Her father had died from a heart attack in his sleep, and she was asked to come back to Maryland for the funeral. She, of course, had boarded the first plane back home.

The first thing she did when she got home was sit next to her mother and cry. They didn't say anything, just sat bawling at the kitchen table. When the tears dried up, her mother had stood up.

“We still have your room honey, just like you left it, you should get unpacked.”

Vanna had nodded silently and gone up to her old room. The walls were pink, and there were tons of stuffed animals. And...bunk beds. She remembered those. Nobody had slept on the bottom bunk since Karin. Karin was her twin sister, she'd died when Vanna was six. Nobody had slept on the bunk since, even Karin's favorite old stuffed teddy was there. There was dust all over everything, her mom hadn't cleaned in ages.

Vanna had sighed and started unpacking her suitcase into the faded white drawers, keeping out only a pair of pajamas which she had quickly slipped into. She had given the room a once-over, letting the familiar images seep back into her mind, and her eyes stuck on Karin's old teddy bear. She had picked up the small, battered bear, and smiled at it a little sadly, a solitary tear running down her cheek. She needed comfort today, maybe Karin would help with that. She didn't remember Karin's death, but supposedly, she'd ben there. Shock, the doctors had said. Her young mind had forgotten ugly memories. Vanna lay in bed half the night, staring at the ceiling, clutching the bear. Twenty-one, and she was clinging to a teddy bear as if it was her only anchor to the real world as shadow nightmares crept from the floorboards and in the closet. Monsters under the bed, in the closet. The shadows crept into her mind as she fell into a restless sleep.

Vanna had stayed at her parents' house for a week, then went back to her flat in Australia. She'd decided to take the bear with her, she'd slept with it every night, had had gotten a little used to it. The first night she had been back, however, she heard a haunting voice in her room, giggling. The sound came every night, that demonic giggling, and every night, Vanna had stayed up, holding on to the bear for dear life.

She'd started hearing humming now too, during the day. It seemed to be the same voice that giggled at night, and she'd started bringing the bear to work, not hugging it, but it's presence was comforting. Vanna found herself needing it, wherever she went, until she hadn't even gone to the bathroom without it. That bear was her life. She had started going to a spiritual advisor about the voices, and eventually, hired an exorcist. He'd made her leave everything, including the bear, in her room, talking to her in the hallway.

“Now ma'am, what was the newest thing you brought to this room? Something that's seen a lot, I don't mean a pack of Post-its.”

She couldn't think about much, unless...the bear. Her voice had come out in a croak. “Well there was something, yes.”

The exorcist nodded. “That's probably the culprit. You need to burn it, whatever it is. Take some time, if you want, but you won't have any peace until it's gone. From what you've said, it seems like a spirit inhabiting an object. What that spirit wants is to get it's body back, actually, any body would do. It doesn't have the morals it did in its past life. You need to burn it, and bury the ashes under a stone, then it should be all right.” The man had given her a look. “These things are serious, you need to burn whatever it is as soon as you can, understand? You must burn and bury it.”

She had nodded mutely. How could the bear be bad? But...if it would stop all of this....she had a fire burning as soon as the man had left. She'd tossed the bear into the fire, where it squealed when it hit the flames. She had sat there, hugging her knees and rocking back and forth in front of the flames until she fell asleep, leaving the embers flickering.

That's when she'd woken up to the giggling again. The bear was there, standing up on its floppy little legs, the same, and yet...those black button eyes seemed crueler, somehow. Vanna had screamed, and fainted. When she woke back up, her hand was throbbing, and she was tied up. Her hand was cut, and she was in the middle of a pentacle, bright red on her carpet. It was blood. Her blood. Vanna tried to scream again, but she couldn't. Her throat had clenched up, and she saw the bear again, finishing the last corner of the design. It turned to her, the black button eyes malicious.

“I can't believe you thought I wouldn't find out...” 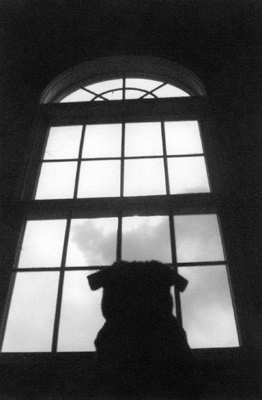