Alex Jonds has super powers. The first power appeared the week before at stark lake. The sky was blue, the water cold and people were relaxing on the beach. Alex watches as little Tommy Jones disappears under the water. Alex dives into the water and goes under to help. As the water gets darker, Alex’s lungs begin to burn. He literally feels his lungs run out of air. Just as he takes a breath in, he realizes that he can still breathe.

The second came after school one day. “Whatcha gonna do about it?” Taunts Michael Skelly, the star quarterback. His chiseled jaw and large muscles pose a threat to anyone who opposes him; he looks menacing in his letterman. Lying under him, on the hot, dry asphalt of the back parking lot, is Joe Kwan, the top of the freshman class. His wallet is lying on the ground, obviously empty. The money is probably in one of Michael’s pockets. Alex wishes he could fight back; he is tall yet weak with small arms and legs. Michael, however, is a 190 pound football player. All Alex can do is imagine what he wants to happen. He pictures Michael’s head being slammed against the hood of his Ford and Michael falling to the ground.

Suddenly Alex hears the sound of something hard striking metal. He opens his eyes to see Michael staggering away with his goons, small droplets of blood falling from his face. He has uncovered the second power; Telekinesis.

Last night, the third power saved Alex’s life. “Alright kid, give me your wallet and I won’t have to hurt you.” Says a man in his mid-twenties, holding what appears to be a 9mm handgun. Alex doesn’t hesitate, he hands the man his wallet and takes off. The air is suddenly filled with the sound of gun fire, three bullets fired consecutively. They all tear through Alex’s back. He hits the ground hard, writhing in pain. The man immediately runs the other way. He isn’t around to see the unthinkable; Alex slowly staggers to his feet. The third kept him alive; invincibility.

“Alex, get up or you’re going to be late for school!” yells his mom from somewhere downstairs. Alex slowly gets out of bed and puts on a plain black T-shirt and jeans. He hurries down the stairs and looks out the window, checking the weather. The sun is shining and there isn’t a cloud in the sky. A light breeze blows through the trees. He decides not to wear a jacket.

He steps into the garage and is greeted by his old, beaten-down pick-up. Alex pushes the button to open the garage and climbs into the car. With a shuddering roar the car starts and Alex pulls out of the driveway. As he speeds down the side streets he looks out over the rocky cliff at Stark Lake, remembering how just last week he saved a boy from drowning. He is so engulfed by the memory that he doesn’t notice the car that is barreling through the intersection, right toward his car.

The car slams into Alex’s truck and breaks the metal railing on the side of the cliff, overlooking the lake. The truck starts rolling down the side of the cliff and as it hits the rocky bottom, Alex is flung through the windshield. As he regains his composure he looks up to see a tall, shadowy man in a long black trench coat, a black work shirt, and black jeans standing where Alex’s pick-up went off the cliff, next to a vehicle with a smashed front end.
“I have to rid the world of Alex Jonds” Otis Jonds explains. “He doesn’t know the trouble that his powers will get him into.” Otis knows he must destroy Alex himself. As far as Alex knows, Otis died in a car accident before he was born.
“You must understand that we could use him some time in the future, Otis” Says Fredrik Punds. He leads an army of men, all of which have powers identical to Alex’s. “If we train him, he may have the one power that could help us win the war.” He’s talking about the war between good and evil. Ten years ago, Fredrik separated from the army, creating his own army of darkness. Now the two sides are at war with one another. For years the war has been a stalemate, but Alex could tip the war in their favor.
“I’m afraid that one of the others will come for him and teach him what is right, besides, there is no one on our side other than me with the ability to train him. Yet I cannot because he still believes I am dead. I’m sorry Fredrik but it must be done before it is too late.”
“Do what must be done Otis.”
Alex thinks hard and uses his mind to throw the man off of the cliff. He then slams the man into the water. Before impact, the man breaks free and starts to hover over the water. The shadowy man laughs.

“I’m afraid you can’t deal with me that easy.” He growls, his voice a deep rumble. He opens his eyes and Alex immediately notices that something is wrong. The man’s eyes are as black as pitch, his skin the same gray as the murky water beneath him. He raises his arms and at the same time Alex is tossed into the rocky cliff behind him. His body falls down hard. He knows he won’t die, but he can still feel the jagged rocks lacerate his skin, breaking bone. A small trickle of blood slithers its way into the water.

“What are you?” Alex chokes out.

“Why I’m just like you, Alex” the Man says, “only I’m much stronger than you are.” Then he reaches into his coat and pulls out what looks like a small pipe, the end of it is glowing a deep red.

“I couldn’t help but notice that you inherited the invincibility” he points the pipe towards Alex, “This should fix that”. The deep red light is mixed with shades of purple and black. A dark beam fires through the end and rips through Alex’s body with great force. Alex feels an unimaginable pain. The man puts the pipe back and mentally throws Alex deep under the water. Alex begins to panic, his deep breaths causing the level of pain to rise. Finally able to calm down, Alex propels himself through the water and jumps out in front of the man.

“You and I aren’t much different are we.” Alex says with a smile.

“Quite the opposite” as if on cue, the man’s hands begin to glow. Suddenly a large ball of fire forms. He throws the ball and Alex is hit square in the chest. He flies through the air before hitting the rocky shore where the water puts the fire out.

The man pulls a dark knife from his coat. The knife has a dark shadow surrounding it. He draws his arm back and throws the knife at Alex’s motionless body. The man isn’t playing around anymore, he intends on killing Alex. Alex begins to regain consciousness just in time to grab the knife out of the air. He dives into the water, moving swiftly around the man. Frantically, the man searches through the murky water, trying to find Alex in its depths. Alex jumps out of the water in front of him.

“Too easy!” the man yells, not even trying to hide the evil grin on his face. He conjures up a fireball, this one larger than the last, and sends it straight towards Alex’s unguarded body. The fireball hits and the fire spreads across Alex’s body. He falls into the water, a cloud of black smoke rising from his body. The man looks down only to find that the body has disappeared. Alex has awakened a fourth power; doppelgangers.

The man panics, searching left and right for Alex. All of the sudden, Alex jumps from the water behind him and rams the knife into his back. He the tosses the man into the rocky cliff, the sound of crushing bone audible through the air. The man staggers to his feet only to see the shadowed knife flying straight into his neck.

Alex rushes over to the man, ready to deliver the final blow. He snatches the knife out of the man’s neck, a fountain of blood spraying into his face. He rears the knife back and lets it fall into the man’s heart…

Just as the knife is entering the man’s chest he pulls out a long, sharp sword and thrusts in through Alex’s abdomen. The knife enters the man’s chest, killing him instantly; however, Alex has been fatally wounded. He pulls the sword out of his stomach, knowing from the classes he took at school that he wasn’t going to make it. His vision gets blurry and he can hear the sound of sirens coming far in the distance. He doesn’t focus; he knows that they won’t make it in time to save him. He focuses on the man’s lifeless body and lifts it back into his car by the side of the road, removing the knife from his chest. After doing that he tosses the knife and sword into the lake. He then staggers back through the smashed windshield of his car and falls into the driver’s seat. When the police show up, they will assume it was a horrible car accident; a Goth man trying to take his own life by driving into the lake collides with a boy on his way to school, the student is run off the cliff and dies on impact. Alex slowly loses consciousness, the blood now flowing freely from his stomach. He closes his eyes as the sound of sirens gets closer. He rips a chunk of metal from the car and thrusts it into his own chest, further playing the car accident. He closes his eyes and as the blood seeps from his body, death finally grabs hold of him. 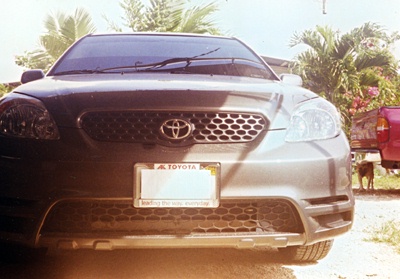