In The Depth of Water | Teen Ink

In The Depth of Water

Favorite Quote:
I like nonsense, it wakes up the brain cells. Fantasy is a necessary ingredient in living, it's a way of looking at life through the wrong end of a telescope. Which is what I do, and that enables you to laugh at life's realities.
Dr. Seuss

Its a beautiful thing, you know, just laying there on the soft, white, powdery sand. Feeling the intensity of the sun's rays caress my body while a shiver runs down my back. Closing my eyes and exhaling a profound, long sigh, that goes deep into my soul. Examining the beautiful seashells that rest by my long,brown hair, while taking in a breath of the humid, salty air around me. Then I hear the crashing of the soft waves that come and go.
They Push.
They Pull.
It only took me a minute to realize what was happening. As my eyes suddenly fluttered open, my fantasy disintegrated before me. The beach looked deserted, while seconds ago it had been overflowing with people. But that was the least of it. What caught my attention was the water. The waves that once came and went were now raging wildly and pulling up closer and closer. How come I didn't know about this while I was dreaming? I was sure I heard no warning. Just then, I heard a terrible, high pitched scream. I froze. Tsunami, it said. I urgently tried to move, but I wouldn't budge. Some force had me weighted down in to the sand. I started panicking, and tried screaming. I couldn't either. By now I was just a worthless lump on the ground scared out of my mind because the biggest of the waves yet was approaching me. As it fell, I could remember feeling the burning salt water running up my nose. My eyes went wide with need for help, but there was no one. Suddenly I see a light shine brighter than anything, even the sun in front of me. I choked on water as I gasped. Warmness filled my insides and I managed to force a smile with all my might, the only part of my body that moved. Slowly, but harmonically, darkness engulfed me completely like the soft waves that crashed not long ago. And believe me when I say, that I was the one who caused all of this. 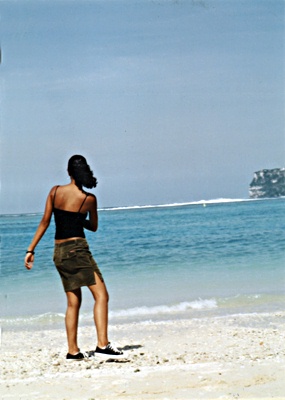