I used to wake up at night, dreaming of what those streaks of light in the night sky really were. I could name several things i thought of, like shooting stars, Nasa with its lastest project, a flying rocket. I even thought of silly things like Dragons, and their riders.

Little did I ever know I would be right.

"Did you set up the microscope?" I asked while laying on the grass. I ran my fingers through it, it felt good.

"Okay im almost done..." Laurie said. She worked nimbly to set up the microscope, something i never had the patetence for. "Come on!" I whinned.

"Okay, calm down. I'm finished." Laurie said. She focused the microscope at the dark sky and sighed. "What's wrong?" I asked while walking over to the microscope. "Nothing good. Are you sure the lunar eclispe is tonight?" Laurie asked. I played with my nails, chipping off the left over red nail polish. "Yea sure, I found a website that said so." I replied while starring into the microscope.

"I could of sworn..." Before i could finish what I was saying A red streak of light passed by, it was going at the speed of sound. Following behing it was several other streaks, this time they were white. "OH WOW!" I screamed. "What?!" Laurie asked while running over. "Look!" I pointed at the sky.

"What am i supposed to see?" She asked in a dull voice. "The light!" I shouted. "Har-Har, nice joke. I really want to see the lunar eclispe, can you stop joking around?" Laurie asked while starring at the stars. "What?? But i swear, there was like 10 streaks of light." I said while freaking out. "I bet your just tired. Marissa, my mom wants me home. I got to go. You can keep my microscope until tomorrow." Laurie said while packing her stuff. "Okay." I replied numbly. I layed down in the grass and starred at the stars. "But i really thought.." I was interupted by a giant wooping sound and the sound of a helicopter landing. I screamed and leaned forward. "Oh my gosh!" I yelled. There before me was 7 white crystal dragons and their riders.

"Do not fear, we come in peace." A rider said. "Really? That's what aliens say before they eat the humans..." I said sarcasticly. A dragon snorted a white cloud and i felt frozen. I shivered. "We really do come in peace, have you seen a red rider come by?" One rider added. "W-well y-yes b-but that was a-while a-ago." I said while freezing. A rider commanded a dragon to come closer to me. He knelt down and i petted him. "Which direction?" The smallest asked. "S-South." I sputtered. "Thanks much." They said, and off they went. The flew back into the night sky. I starred up and saw a million crystals. I smiled. I was right. 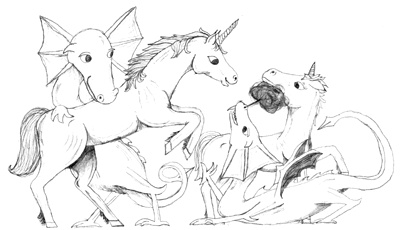