“Listen up boys!” said a young lieutenant. His name was Lt. Marcus Willis. He was the leader of the S.T.A.F (Special Tactical Armed Forces). “A classified report just came in. This came from the UN so this must be big. They want us to go to both Colorado to see what had happened there. NASA reported two objects breaking the atmosphere and landing near Nuclear Testing Facilities in Colorado. The scientists in Colorado were trying to figure it out, but a couple of days ago we lost contact with them. We’re going to do a twenty/twenty jump. So gear up, we are leaving at 0500 hours to Colorado."
All seven started for the door and directly went to the armory. First was Tex, a tall brute looking man, with muscular arms and thick legs. He had short brown cropped hair. Behind him came Mother she was the unit's medical support operative. She was thin and short with blonde hair pulled back into a pony tail. Along came Ash, he was the rookie and always sucked up to the lieutenant and always bad mouthed the rest of them for not respecting their superior officer. Next was Glen he was the unit's demolitionist, he didn’t talk much but when he looked at you would crumble in fear. Church the most proficient shooter was the sniper and never talked about killing a man, maybe because he was ashamed of being a killing machine. Clutch the engineer and pilot worked with Glen sometimes. And right behind him was Willis.
When at the armory Willis opened the rack and started to hand out weapons. Tex first got the M59/B Smartgun, a VP78 Pistol, and some grenades. Mother was handed a ZX-76 Shotgun, a VP78 Pistol, and a med kit. Ash gladly took the M41A/2 Pulse Rifle, VP78 Pistol, Heat Sensor, and grenades. Glen was given the M260b Flamethrower, a VP78 PISTOL, C4's, a Claymore, and grenades. Church hesitated at first when Willis handed him the M42C Scoped Rifle, a VP78 Pistol, and a smoke grenade. Clutch took the M41A/2 Pulse Rifle, VP78 Pistol, and engineering tools. They all set off to the airstrip and awaited for their "Bird" take them to Colorado.
When they arrived over their destination they jumped from the plane to the lake near the testing site and swam to the lakes bank. Just when they reach the bank a wooden box dropped from the plane landing near them. As they opened they each grabbed their weapons and geared up. As they jogged their way to the facility they saw something that stopped everyone . . .
Bodies and limbs were scattered everywhere near one big grapping hole in the fence covered with slime. Weapons and tools were near the bodies or what was left of them. Blood drenched the soil and walls of the facility.
"What the…" said Ash being cut off by Willis signaling him to be quiet.
They quietly and cautiously moved toward the inner compound looking for an entrance. After ten minutes they found the entrance, to their surprise the door was open. Darkness and fear fell upon them as they entered the facility.
The lights flickered on and off while a frequent tap of water dripping from the pipes overhead. The scanner didn't pick anything up of any life forms but just them. They continued their way down the stairs to the offices. As they arrived at the office everyone wasn’t shocked by the mess.
Willis broke the silence with, "Clutch and Glen go set up contact, Church get up to the roof and set up a perimeter, Mother stay with me, Tex and Ash go up to the entrance and report if any movement is there. Now go!" 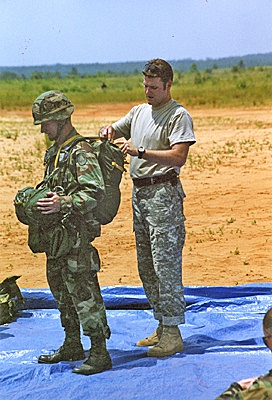