Once Upon a Parody: Rapunzel | Teen Ink

Once Upon a Parody: Rapunzel

Once upon a time there was a big, tall tower. It stood a thousand feet tall, with a spire that cut clouds in half. In this tower was a princess to save, a witch to cook, and a dragon to slay who lived outside.

Every day, the witch would climb a thousand stairs to bring the princess her food and sleeping potion, for without it she could not sleep. The dragon would then sit on its haunches and read to her, its head right outside her large window. Then the witch would go downstairs, and conjure up a big meal for the dragon, and eat a poisoned apple. Then they would play cards till midnight, and go to sleep. They did this every day.

One day, Prince Charming came riding up the road on a big black horse. He tried to slay the foul dragon by cutting its head off with his sword, but his sword merely bounced off the dragon’s thick hide. The next day he tried arrows, but they bounced off like the sword. On the third day, Prince Charming discovered that even a dragon will blow up to tiny bits if you shoot it with a bazooka.

Then he tried to kill the witch with his sword, but the witch turned to vapor and the prince ran away. The next day, he tried killing the mage with his bazooka, but that didn’t work either. Then he simply gave the witch an unpoisoned apple, the only thing that can really kill a witch.

Then the prince ordered his workers to build an elevator, because he didn’t want to climb a thousand steps just to kiss his bride awake. When the elevator was finally done and he rode up, he discovered the princess had starved to death.

The prince went home happier anyway—the princess in the next kingdom over was much prettier than the dead one in the tower.

Moral of the story: If you have guys stalking you outside a tower, have your witch bring you lots of food. Or, you know, just fly away to a different tower on the back of your dragon before the prince gets a bazooka. Either one works. Or, if you really wanted to get creative, you could just say the moral of the story is to not eat fried chicken before seven o’clock, but that one doesn’t really make that much sense. 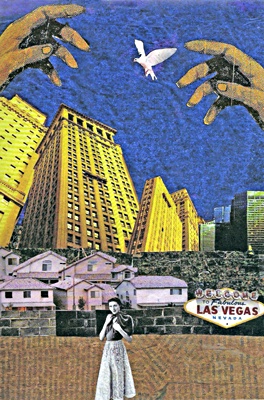 The author's comments:
I wrote this in the wee hours of the morning about a year ago. It was fun!
Post a comment
Submit your own

Favorite Quote:
I vow to shine, like a sapphire, some gem!
I promise, not to whine, but smile till the end.
The symphony of my life
like a violin I will play,
I would vouch,
Vehement to my life I lay.

Favorite Quote:
I'm never the best but I am always the better, and telling me I am the worst gives me the right to prove you wrong.

View profile
Ever heard of the phrase, "If you don't have anything nice to say, don' say anything at all"? Constructive critcism is good, but I can't do a whole lot with "lame". And as for it rambling, it's supposed to be a parody of the story by the Brothers Grimm, which includes their writing style. Thanks for your feedback, though!
Mudd was here said...
on May. 12 2011 at 1:31 pm
That was really, really lame... I'm sorry but it was! it just kind of rambled on a wee bit... o well, points for creativity though
f0glilght said...
on Apr. 14 2011 at 7:06 am

made me laugh so hard! great work.! i hope i dont starve while waiting on princess charming :/

Yes, that tickled my fancy quite well!