King Thronos Brokke slammed his heavy fist into the wooden table, causing the stone cup set precariously on the edge to topple. One of the advisors reached out and righted it before it fell. A brave maneuver, as that it brought him within inches of the angry Dwarven king.

“I don’t care what the mage said!” Thronos bellowed, the purple veins in his neck bulging dangerously to the point where all the advisors thought they would burst. “Stronghold has been standing on this mountain top for thousands of years, and there is no reason at all why we should move now, black dragons or no black dragons!”

“But, Your Majesty…” one of the advisor’s began to argue, but he was silenced immediately by a black look shot at him from the king.

“By the gods!” the king roared. “Idiots! Don't just stand there cowering! When I bellow, bellow back!” frustrated, he slammed both his fists back down on the table. This time the cup went flying off and crashed into the floor, smashing and spilling wine like a growing bloodstain on the stone. One of the advisors sighed, and began to pick up the pieces.

“My lord,” the halfling, Tegan Lightfoot, began from his perch on a nearby chair. “please, calm yourself.”

“I am calm!” Thronos turned to glare fiercely at the halfing, the muscle underneath his stormy gray eyes twitching in agitation.

“The mage will be here, soon,” Tegan reminded him. “He’s going to want your answer.”

“Oh, I’ll give him my answer, alright. Stronghold’s not moving. Let those hells-cursed black wyyrms come and get me, if they think they can! Because Stronghold isn’t moving, and if he tries to move it on his own, I will come after him and reduce him to wyyrm food with my bare hands!”

“Is that your decision, then?” came a new voice from the doorway. All the dwarves turned to see the Elvin mage, Lacquin Loramir, standing in front of the closed door, the hem of his black cape fluttering in a non-existent breeze. The mage folded his arms, his emerald green eyes surveying the room from beneath the shadow of his hood, finally settling on Thronos. A slow grin spread across Tegan’s face at the sight of his old friend, and didn’t stop until the corners reached his ears. Then he sprung from his chair and, with a frightening speed that brought justice to his name, he flung his arms around the mage’s legs and hugged him tightly. Lacquin laughed, his voice like the babbling of a mountain brook, and he dropped down to his knees so that he and the halfling were level before hugging him back.

“Good to see you, my old friend,” he whispered into Tegan’s ear.

“And the same to you,” Tegan whispered back, not quite as quietly as Lacquin. “You might want to be careful. He feels like being particularly stubborn tonight, and he’s liable to bite your head off.”

“Dear, dear,” Lacquin shook his head in mock disbelief. “why does our Dwarven friend find it desirable to remain so incredibly stubborn? It’s not good for his health.”

Thronos scowled at them both, as if he knew they were discussing him and he did not appreciate it one bit. Lacquin stood, sweeping the hood back as he did so, allowing his long, thick crimson tresses to tumble down his back like liquid fire, hovering just above knee-length. He took a step forward, and the crowd of Dwarven advisors stepped back quickly to get out of his way. There was nothing standing between him and the king, who stood right where he was, arms folded, legs apart, clearly not going to be moved.

“I’m not going to change my mind,” he warned.

“I’m not trying to sway you,” the Elvin mage replied carefully as he continued to advance. “I am just trying to better understand. Why won’t you move Stronghold as I suggested?”

“It’s stood here on this mountain for over a thousand years,” the dwarf jabbed his finger towards the floor to emphasize the point. “And right here is it where it shall forever remain. No squirming wyyrm is going to drive me away, no way, you can just forget it.”

“So you are letting your pride stand in the way of your common sense?” Lacquin asked quietly. “How very much like a dwarf,”

“If the elves want to evacuate, that is their prerogative,” the dwarf king snarled.

“The elves are as reluctant to leave as you are,” Lacquin stopped right across from the king. The only thing they separated them now was the thick wooden table. “this mountain is our home, but we are left with little choice.”

“You can stay and fight!” Thronos punched his fist into the air. Tegan closed his eyes, expecting him to slam it into the table, possibly this time splitting the wood. But he didn’t.

“We fought the Dragon Lords once long ago, King Thronos, and we suffered a crushing defeat. Many brave elves died, and that was when we were still hundreds. There are too few of us now, it would be unwise to stay and fight.”

Thronos snorted. “Letting the defeats of the past interfere with the possibility of victory in the future,” he replied in a high voice, mocking Lacquin’s own musical tones. “how very much like an elf.”

Lacquin glared at him from across the table, and Thronos matched it with one of his own. He slammed both hands on the table and waited, as if daring Lacquin to make a move. The Elvin mage did nothing, except imagine how many insults Thronos could throw his way with Lacquin’s bejeweled dagger through his throat, and found he was not completely opposed to the idea.

“We offer you,” the mage began slowly. “safe passage through our lands, we even offer you guides who will escort you as far as they would be willing to go. So why, good king, do you turn down our offer?”

“I’ll tell you why,” the king growled. “because Stronghold does not need help your kind, we will make it just fine our own. You elves can run, run as fast as you can before the dragons get here, and it will take you years to relocate, to find another place on another mountain that isn’t already overrun by manticores and trolls.” He spat on the ground. “And then, when the dragons are done with this one, they will go after more, and you will run out of places to hide.”

Lacquin was silent for a long minute, and then he reached out towards the king. The king’s dark eyes narrowed, and his hand went immediately to the large axe on his belt, but Lacquin’s hand stopped shorter of the king’s neck, and instead went to the Dwarven hammer that hung from a black leather cord. The hammer was strong iron that had been forged long ago by the first of the Dwarven kings, Igranus Brokke. The talisman felt cool against the elf’s palm, and his thumb stroked the deep engravings of the Language of the Ancients that had been carved carefully into the surface. He looked up at Thronos with cool eyes, and the dwarf king’s suspicion was quickly replaced by confusion as he saw the slight smile touch the elf’s lips.

“I made you king, Thronos Forgehammer,” his voice was quiet enough so that only the king could hear it, and Thronos fought very hard not to wince at the mention of his old name. Lacquin continued, “nobody here knows that you are not the true descendant of Igranus Brokke. No one but you and me.” He leaned his entire body forward conspiratorially, all the advisors watched the two warily, their hands on their weapons. “I placed you on the throne because I thought you would be a wiser king than the corrupted bastards who stand in your hall of fame, but perhaps I was wrong.” He pulled back, dropping the talisman and watched as it thudded heavily against the king’s chest.

“You haven’t the right,” Thronos was sweating. The smile that spread across Lacquin’s fair face was not a pleasant one.

“I have every right, Thronos,” his voice was still very quiet. “anything I give can just as easily be taken away.”

Thronos was trembling with rage, his shaking hand grasping the hammer around his throat, as if protective of it.

“You wouldn’t dare!” he challenged.

Lacquin bowed, and when he righted himself, he pulled his hood back over his head, until nothing but his eyes were visible.

“Your Majesty,” it was his only reply, but the words echoed ominously in the hall. The elf turned on his heel and walked towards the door, his boots making no sound against the stone. Tegan scampered out the way, casting his friend a questioning look. Lacquin smiled reassuringly and opened the door, and like a midnight specter facing the approaching dawn, he vanished into the whirling snow. 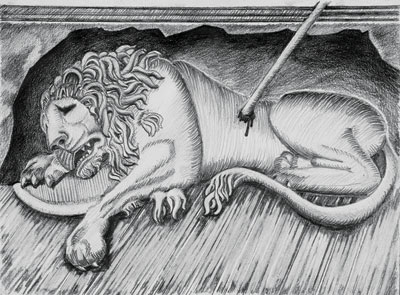 Favorite Quote:
How are you?

Favorite Quote:
"Reality is merely an illusion, albeit a very persistent one.
-Albert Einstein

Favorite Quote:
“Write to be understood, speak to be heard, read to grow...”
(By LCP)

"Promise me you'll always remember: You are braver then you believe, stronger then you seem, and smarter then you think."
(Christiphor Robin to Pooh)

Favorite Quote:
"We are not amused." --Queen Victoria

View profile
This is a great start. Did you draw inspiration from J.R.R. Tolkien or Christopher Paolini? One of the best ideas I saw in this piece was Lacquin making Thronos king. I want to know more on this--try expanding on it.
BreakingInside BRONZE said...
on May. 1 2011 at 9:19 pm
BreakingInside BRONZE, Pinson, Alabama
4 articles 0 photos 29 comments
View profile
WOW loved it
Hawthorn BRONZE said...
on Feb. 24 2011 at 12:05 pm
Hawthorn BRONZE, Nowheresville, Maine
3 articles 0 photos 55 comments

could u take a look at one of my pieces, it called ARK AIR

i totally loved it, u r a totally amazing writer i cant wait for more to read

Awesome, this is a great begining, writ more please.

By the way, can you please, read some of my work, rate, and critisize? I'd appreciate that.

Favorite Quote:
I WILL NOT BOW