A crash came from downstairs, followed by a scream. Two children, siblings, Melanie and Preston, hid under their bed, trembling as the footsteps clomped up the staircase.

Preston buried his head in his sister’s chest, muffling his tears in the cotton. From under the darkness of the wood above their heads, she could see monstrous feet on the carpet.

A pair of black high heels walked themself into the room, with no feet inside them. “Do you detect them?” a haughty feminine voice asked.

“No, ma’am,” the first voice grumbled.

The invisible woman sighed, and the black heels turned and walked out the door, followed closely by the monstrous feet.

The two children held each other, trembling, for several minutes, until a pair of tennis shoes appeared in the doorway.

The teenage boy in the doorway leaned down to meet their eyes. “You’re okay!” he exclaimed.

Preston crawled out from under the bed, shortly followed by Melanie. Preston was only four years old, with a head topped in blond cotton-fluff hair. Melanie, seven years old, had auburn hair pulled into pigtails with freckles across her nose. Michael was fifteen, with freckles and cherry-blond hair like his sister, and blue eyes like his brother.

“What’s that?” Melanie asked, pointing to the envelope in Michael’s hand. Michael’s jaw set, and he glanced outside the window, not wanting to meet their eyes.

Michael led his siblings out through their bedroom window to avoid the blood that painted the walls downstairs. They hadn’t seen what had happened. They hadn’t seen the monsters, beady-eyed with thick grey skin like an elephant and fanged underbites. They hadn’t watched their parents, Meredith and Richard Sherman, be ripped limb from limb.

They had nowhere to go, nothing to do. No parents, no family to take them. They were alone, and the only option Michael had was to listen to the last thing that his father ever told him. To walk down the street bordering the canal, to hope that no one noticed them.

Michael bought a lantern from the nearby store, then the three siblings waited in grieving silence for the night to fall.

The fog crept across the street, consuming everything in sight.

“Michael?” Preston asked, and Michael looked down at him. “We’re going to see Mommy and Daddy soon, right?”

Michael looked back up, unable to meet his eyes. Tears welled up in his own, and he swallowed. “No.”

Preston began to protest, asking why, but Michael had ceased listening and raised his arm, lighting the lantern aflame. He swung the lantern like a pendulum, and slowly, out of the fog, a houseboat appeared.

“Who goes there?” A grizzly voice called from the boat. The two children hid behind their brother, obviously unprepared for the Captain’s ghastly appearance. Parts of his face were misshapen and ruddy, most of it covered by a thick beard. He wore a thick leather coat that reached his ankles and had umber hair like a matted mop.

Michael froze where he stood, unable to breathe.

“What, are you mute or somethin’?” he demanded.

“Michael Sherman,” the boy stammered. “These are Melanie and Preston.”

The Captain looked Michael up and down. “Any connection to Meredith Sherman?”

“Our mother,” Michael confirmed, swallowing back the emotion in his next words. “Dead.”

The Captain’s eyes widened. “How so?”

“Big, scary monsters!” Preston interjected. Melanie couldn’t answer, she was too shocked. Preston was too young to understand… how Michael wished he was just like Preston.

The Captain looked to Michael, who nodded with reverence.

He evaluated the three one more time, and then nodded. “Come aboard, then. No time to waste.”

Michael scooped Preston up, handing him to the Captain to set down. Melanie was next, and she went without protest, just numb denial.

Michael leapt over the gap between the road and the boat, landing on the unsteady wood.

“Anemone!” The Captain yelled, striding across the boat and throwing a coil of rope over his shoulder.

“Yes, Captain?” The voice came from the side of the boat, yet no one appeared.

“You expect me to sail without a course?”

“Anywhere is better than somewhere where they can find us.”

The boat began to move under Michael’s feet, and Preston ran to the side with glee.

“Preston, get back here!” Michael yelled.

The Captain barely batted his eyes, pulling open the door to the inside of the schooner and pulling out a wooden wheelchair. Michael watched in jaw-dropped awe, as Anemone pulled herself into the chair, wringing out her soaking hair.

“Wow!” Preston marvelled, running over to her.

Melanie temporarily snapped out of her haze, staring in wonder at her.

“You have a lot to learn if you’re going to survive this world, and survive Dephorae,” said Captain.

“Dephorae?” Michael echoed, and the captain stepped into his cabin.

“You and I have much to talk about, young man.”

“So that’s who I saw,” Michael said after the Captain had recapped everything. “Dephorae. She’s the one who came to kill my parents. Because they apparently have the cure to whatever curse she’s under?”

“And this relates to my parents because they have the key to her curse being removed? And that secret is in this envelope?” Michael recapped.

The Captain nodded, and Michael turned it over again.

“That letter has been passed down to you from your grandfather, from back when he defeated her the first time and made sure she could never again rise. From back when I cursed her.”

Michael looked up sharply, staring at the Captain.

“Your mother, Meredith? My daughter.”

The two stared at each other for such a long time that Michael wondered in his shock how many days had passed. In reality, it was only a minute.

They looked at each other a little longer. “Why did she get cursed?”

“She wasn’t just beautiful,” Captain said. “She has the ability to kill anyone with a glance. Giving her that curse was meant to be a blessing. Instead, she lashed out, she came after all of us who worked together. My boy, you and I are the only ones left for her to come after.”

“Yes, the boat is enchanted. She’ll never find us here.”

“And she won’t have a reason to try.”

The Captain tilted his head at the statement before Michael took a candle from the table and lit his envelope on fire.

The Captain’s eyes widened as the paper burned, sparks drifting in the air and smoke wisping toward the ceiling.

“Let her come. Let her try. There’s nothing left for her.” 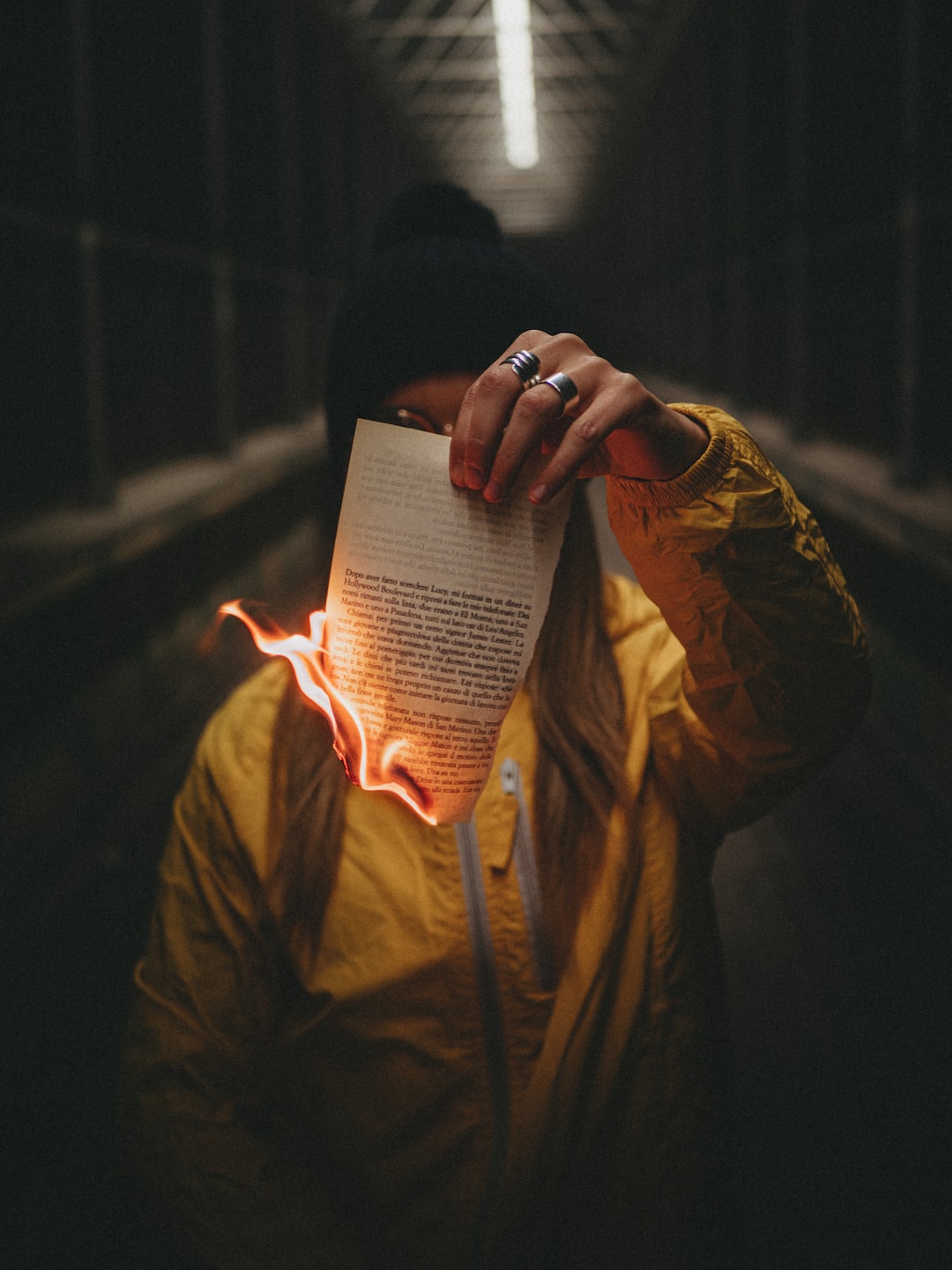 Photo by Erica Magugliani on Unsplash

I was inspired by the Harris Burdick painting Captain Tory, and Ashes to Ashes was created!