Head in the Clouds | Teen Ink

Head in the Clouds

He looked at her with all the love in the world, but she didn’t even see him standing there with his hands in his pockets. She lit a cigarette and looked out from the balcony, at the little café on the street which never slept, at the tiny old woman who was always hanging her white petticoats and beige drawers out to dry, at the young boys playing with wooden hoops on the pavement. She saw everything and everyone except for the man who had gazed upon her for the past fifteen years, wishing and wondering if she would ever look at him just once. She never did, but he waited for her every morning. He waited and waited, then waited some more until his aching heart could stand it no longer, but to no avail. He sighed, just as he had sighed the day before, and the day before that. She got up from the little mahogany chair that stood on a balcony completely conquered over by crawling ivy, and that bore the red fuchsias and wild strawberry plants that she diligently watered every day. She stubbed out her cigarette, twisting it almost violently onto the wrought iron railing, and with one gliding movement she was gone, hidden by a satin green curtain. As he looked to the sun, a smiling ball of light, a mixed fragrance made up of vetiver, honey, and sandalwood suddenly hit the man full in the face. It was probably carried by the wind from some little perfume shop in Fontainebleau, or perhaps Neuilly. He breathed it in, closing his eyes, and imagined that it was her scent, that it was what he would some day wake up to every morning. Then, as quickly as it had come, the fragrance floated away with a zephyr, strong enough to rustle the undergarments on the clothing line of the old woman and to spin the boys’ hoops all the way down the street. The man’s daydreams were now shattered; he took one last longing look at the balcony, in the hope that she had returned to gaze at the fragment of Parisian life she had grown so accustomed to. But all he saw was the little mahogany chair, sitting alone and bare in front of the greyish green railing. He turned around and shrugged. Never mind…he would be there the next day. 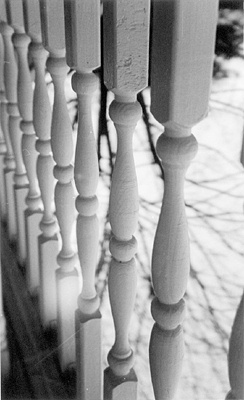