The White Dragon (Part One)

It is said that the souls of two lovers live on eternally, no matter what form. One such reincarnation came in the most unlikely of pairs.
Legend has it that a white dragon roamed the land of China. He was the most vicious, cruel, and dangerous mythical creatures ever to have lived. He usually resided in a nearby cave of any village and when his anger was aroused, he wreaked havoc and destruction even on the most innocent of towns. He was ruthless, and only few of the survivors ever lived to tell the tale. They came to know him as Zenghenlong. That all changed one day…
When he was provoked yet again, he came to devastate another village. That’s when he met her. She was just another bystander in the way when all of a sudden, the Emperor’s army of the fiercest warriors brought down the dreaded dragon. He was dead when they heaved him up and threw him down the deepest canyon…or so they seemed. Zenghenlong barely got out of the chasm alive but weak when the army had gone. For the first time ever, he was very much closer to death were it not for some aid.
The girl from the recently destroyed village came not for revenge, but out of sympathy and curiosity. She was known as Lin-Lin, a well-known and beloved daughter of a medicine man. Her father was also known for being a sage on the supernatural. When she heard about Zenghenlong, she had a dream about the other side of him. That’s when she was convinced that he might have some good in him. Lin-Lin also knew some magic tricks her father taught her, so when she helped Zenghenlong, she knew she could not turn him into a human, as that would increase the fatalities of his injuries. With his cooperation, she was able to get him to the nearest cave.
She spent several days tending to his wounds and getting close to him. She also learned he was not all he seemed: he had a tragic past when all that was close to him was suddenly ripped away. When Zenghenlong wished to be left alone, Lin-Lin complied…on account of that he didn’t try to run off. The two of them got along really well when Zenghenlong was recuperating. When he felt well again, he offered to make Lin-Lin his master, something he never did before. But she declined and said that she had to get back home, so Zenghenlong gave her a special whistle to blow on whenever she needed him. 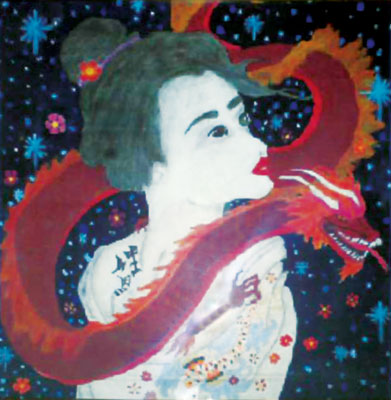 The author's comments:
The story is going to be longer than I anticipated, so it's going to be two articles. Read this one first.
Post a comment
Submit your own