The Summer That Changed Everything (pt.7) | Teen Ink

The Summer That Changed Everything (pt.7)

He called me. Over and over. I shut my phone off after the thirteenth phone call. It was almost time for my grandma to go to bed. Almost time for me to see Ben. I had never been so excited to see someone before. Not even when I had been in love with Damien.


I ran the whole way to the dog park. He was there again. He was laying on the dock, staring up at the night sky. I smiled, something I had been doing a lot of since I had met him. I laid down next to him without saying a word. We were silent for a while. It wasn’t awkward like most silences. It was perfect, serene, natural.
“I almost thought that after last night you wouldn’t want to see me.” He said.
“Why?”
“Because I want to kiss you. I know you don’t like me like that, but-”
I cut him off with a gentle kiss on the cheek.
“I do like you. A lot.” I admitted.
He smiled, “I’d kiss you, but like I said… I wait until the third date.”
“I think that makes you a better person.” I smiled back.
“So what would you like to do for our second date?” He laughed.
“Let’s go to the park over at the elementary.”


I’m not sure why I always chose parks, but I think my decision was great. I sat on the swing while Ben pushed me and we talked. We would talk about everything and nothing all at once. It was amazing to have someone I could just talk to like that. Even Kerry didn’t know all of the things I was telling him, and Kerry is my best friend. Eventually I was tired of telling him my stories. I wanted to hear about him.
“Tell me a secret?” I asked.
“Hmm… When I met you… I… I felt like… Promise you won’t make fun of me?”
“Promise.”
“I felt like for the first time I had met someone who was real. You know what I mean?”
“Yeah.”


It was like he understood how I felt about him. It was crazy. I had never met a person who was so open and trusting. I didn’t want this summer to ever end. I never wanted to leave him, but the night had grown old, and it was time to go. He walked me home and gave me a hug. He said goodnight and let me go.


I woke up to the sound of my grandma squealing with excitement. I groaned, not even close to being ready to wake up. I heard my grandma, even when she went downstairs. She was talking to one of her friends on the phone. She was gushing about going to a concert tonight… I had almost forgotten! How would I tell Ben that I couldn’t see him? I groaned again, this time pulling my covers over my head.
“Taylor! Get up! We’re going to the salon to fix your hair!” My grandma yelled.
“What’s wrong with it?”
“It just needs to be dyed again. Kerry needs her hair done too.”
“What?” Kerry moaned groggily.
“We’re getting our hair did!” I said in my fake country accent.
“Awesome!” She replied, immediately awake.


Sometimes I wondered if she had selective hearing. It wouldn’t be hard to believe. 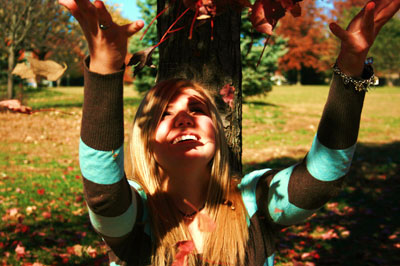 Favorite Quote:
All good things must come to an end.

View profile
I cant wait till the rest :D