Too Young for Love - part 1

"So, Rachelle, who do you like?" Hannah asked me. I tilted my head to look into my hot mug of tea, clutched tightly in my hands, avoiding the question for as long as possible. The steam flooded my eyes, veiling my apprehensive face. Outside, snow swirled, and I desperately wished I could be out there in the dancing white, instead of in here with the curious faces of my friends gazing at me expectantly.
"umm... no one," I mumbled.
Tanya rolled her eyes in my direction. "Sure, Rachelle. You don't like anyone."
"Well..." I said hesitantly. My face was scrunched up in indesicion, and everyone was leaned forward in their seats, expecting. "It's Sam!" I blurted, the need to make people happy overriding my protection against embarassment.
There was a collective inhale of shock. "Not Sam Gordon!?" Emily shrieked.
I grinned sheepishly. "Yeah, Sam Gordon."
"You've gone round the bend, honey,"Hannah said, shaking her head disapointedly, "Round the Bend."
Everybody laughed at her head-shaking, and I laughed right along with them. While my friends lapsed into more gossip, I stared out at the window again, taking advantage of the momentary distraction to imagine I was out in the swirling snow.

It was now 5 months later, and I was still pretending that I didn't like Sam Gordon. After that sleepover in the snow, I had clung to the excuse of fibbing, swearing up and down I was only joking. I chose a more suitable crush, and spent the rest of 8th grade going out with him. But nestled in the back of my mind was mysterious Sam Gordon, no matter how hard I tryed to shoo him away.
He was so darn interesting! Other people thought it was creepy, his untold mysteries, but it was intriquing to me. Despite that hard, tattooed, cold-hearted shell, I thought he was a good guy. There was something about him that hinted at a hidden soul to match his secrets. And no matter how hard I tryed to focus on bland Markus and his very obvious, open past, I could rid Sam and his mind boggling secrets from my mind.
So here I was, outside his favorite summer hangout, one hand on the door handle and the other on my purse. I really hated that he had to choose the local beer store as his hangout. I imagined whole gangs of thugs hiding behind the door, hitting their fists and pummeling each other just for something exciting to do. I shivered in terror, and almost pulled away. But Sam's tan, gaurded face swam before my eyes, and I was inspired to take that guarded look away and see what lies behind. That vision gave me the strength to go in there.
I pumped the silver handle and strode throught the door. I cringed a little bit, expecting the gangs from my imagination, but all I saw was a middle-age man browsing the racks of wine and a nice looking young man behind the counter. I walked over to him, wary and confused etched on my face.
" Excuse me? Is there a Sam Gordon here?" I asked politely.
The man laughed. "Are you his new girlfriend? Haha! Sorry, I'm Kyle Gordon, Sam's older brother. He's in the back, probably watching TV and not doing what he's supposed to. Can you do me a favor? If you go back there, please tell him to get off his lazy butt and come help me!" My eyes were popped way out, and I swear my jaw was on the floor. Kyle chuckled and steered me to the back. I stumbled and went on through the doorway.
Sam was slouched in a dull blue beanbag with a remote in his hands. He seemed to be staring blankly at the TV, but once I got closer, I realized his mouth was agape and his eyes were glassy.
He was sleeping.
It was perfect. I could finally see him without that horrible mask of wariness, without him getting self concious or angry. He was so handsome, much more handsome than he normally was... and that was pretty handsome already. I stared at him for several minutes, maybe hours, before his brother interruppted me.
"Did he say he would come help, Rachelle?" Kyle called back, a laugh in his voice. I had a feeling he never stopped laughing. In front of me, Sam jerked awake, blinking his eyes sleepily and rubbing his face. Abrubtly, he stopped and slowly moving his face away from his eyes.
"Rachelle?" he asked incredolously, "What are you doing here?"
"I... I, um..." I stuttered, making a complete fool of myself. Sam's glaring look didn't help me recover my nerve. "I like you," I blurted. He looked taken aback. "All my friends told me you were weird, that you were horrible, but I don't think so. There were all sorts of rumors, like that you killed people, and that you walked around strapped, but I know you're not a gang thug. I believe you're a nice, sweet, caring guy behind that bitter shell, and I'm determined to find out whether I'm right or not. So please, don't get mad, I just really like you..." My voice crept off into oblivion, and I looked down at my toes sheepishly. All was silent.
Suddenly, a warm finger lifted my chin up. I caught a glimpse of Sam's serious face, and then his soft lips pressed against mine.
"Rachelle," he murmured gently, "It's OK. I like you too." 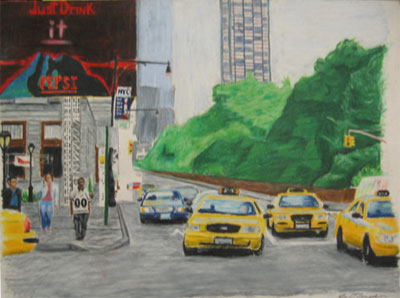 The author's comments:
I was just inspired to write this while working on another piece. The other 2 installments will be up soon! Hope you like it. :)
Post a comment
Submit your own

Favorite Quote:
All good things must come to an end.

View profile
Its so cute...that girl is amazingly brave