Growing up in a home in Brooklyn, where her Papa had gotten drunk and thrown himself down the air-shaft to his death, Pom listened to ambulance sirens nightly with a shrinking feeling that their horrible sing-song was the only music she’d ever know. Her mother busted open the air-shaft with a sledgehammer. Her Papa had fallen on a razor blade which killed him. They still must live in that blood-stained apartment, Pom and her momma. They had no money and no relatives.

Pom learned to sing from sneaking her ear against a flat door where two choirgirls practiced vocals. Glor-or-or-or-or-ia. Ni pi ti lo ha he. A doe, a deer, a female deer. She found one apartment where a renter played Bach chorales on the grand piano. One renter played conga drums, another played violin, another had a radio that seemed to tinkle old-timey baroque pop all day. Best of all were the family radios playing the Chicago Symphony Orchestra. Pom didn’t care if it was the local Brooklyn Tabernacle or Buddhist monks playing on the radio. Music was always precious to her. She flattened herself against musical doors. She seethed when the beauty was blocked out by running water or shouting voices.

Every Christmas Eve until she was twenty-four, Pom cracked open her apartment door. Cold air whipped through the hall, and she shuddered as she lay awake waiting for Santa Claus, whom she firmly trusted. She slipped a letter under the door for him, along with half a glass of sherry wine. She couldn’t explain why she did this—or anything else.

She had flunked out of choir in high school, but she was secretly hoarding coins in a tuna-fish can, to buy herself a violin from the German instrument-maker down the street. Pom refused to believe that she couldn’t play a violin. The beauty of strings would be her ticket out of madness!

When Pom was twenty-five, she met a young man outside the Kleenex factory where she worked, and she nicknamed him Flute. A skinny man with a shock of strawberry blond hair, he walked the same city block for hours, in a hopeless manner. He clutched a flute in his teeth and endlessly tried to play it—though he had only one hand, and only two fingers on that hand.

“HEY!” Pom hollered at the boy. He turned to her and looked horrified.

“It’s raining, raining, it’s pouring, the old man is snoring, he bumped his head and he never got up in the morning,” sing-songed Flute. “Raining on birds and trees and factories and me. It is raining on music and love. The skyyy is forever rainnning…”

“Light of the earth, shine up, shine down, shine on me, shine on people all around,” said Flute, with an uplifted face. He thought he had said something very profound.

“Just answer me this, sir,” said Pom, “are you drunk or drugged up? How can I help you? How can I know what you’re talking about if I can’t come near you?”

Though she was disgusted, she was fascinated with the boy. He seemed harmless and stupid. She told him her musical ambitions, told him of her world travel plans, told him of her money-bank and her Ticket out of Madness. She spoke as though talking to the rain. She was too bewildered to stop talking to him.

Flute stopped pacing the sidewalk. He gathered up his wits into his poverty-stricken face and was about to speak to her. You are beautiful, he might’ve said. I love to hear you talk. I love music also. I love watching you move. I love the shine in your eyes. I want to help you, he might’ve said.

Pom snatched the flute from his teeth, like he was a dog.

“What good is a flute to a crippled man? I want to learn how to play a flute,” she said. “If I can’t get a violin, a second-hand flute must do.”

Flute turned red. “My name is Karl Bird, I used to be on TV, and I am perfectly capable of playing a flute. Would you believe I found it in the dumpster behind King’s County Hospital? I did.”

Pom took the flute to the local pawn shop, where she found it was worth four dollars. She took the money and bought a pack of Pall Malls for the crippled man, to say she was sorry. she never stopped to think how he would smoke with no hands. The poor guy could do nothing but beg.

To her astonishment, on the sidewalk, Karl stood holding a violin. He held the bow in his teeth and the instrument he held with two very stubby, burned-looking fingers. He was ludicrous, a fool.

Pom dropped the cigars she had. “Where did you—Karl, what? WHAT? Where did a bum get a violin? Did you trash-pick at Kings County Hospital again?” She wanted to sob.

Karl slowly lowered his violin, then bowed like a conductor. Pom felt struck to her core by his handsomeness, his flawless manners.

“I present to thee this violin. Surely, I bought it—my own hard-earned money.” He pressed his empty pocket. “Trust me—look at me. I bought you a violin. Look, didn’t I used to play a violin myself, in the orchestra, before the fire?”

Pom refused to break the spell. She would only gaze reverently at her Ticket out of Madness. She would not saw or scrape that bow and ruin it! Looking at the polished new violin made her chest hurt with beautiful longing.

“Thank you,” she breathed, flabbergasted.

“What is your name?” asked Karl.

“Pomegranate—they call me Pom,” she said. Her cheeks matched her name.

That day, Pom and Karl became best friends. Their days they passed on the sidewalks, lost in each other’s company. Rain on the sidewalks was forever and ever falling. Umbrella-less and soaked, they walked. Their words were like maps and drawings. He would teach her to play the violin by talking her through it. She would play Fur Elise in the rain, and the birds would start flying again, and life would be so wonderful—just magical. 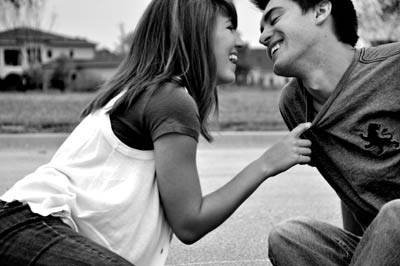 I was just taking a stab at a love story. I've got a spark of an idea for a better, more well-rounded one. I just know that it will be something like a fan fiction of Wuthering Heights, and the heroine and hero will be named Fianna and Dagwood. You can let me know if you have any ideas!

View profile
uh? she stole his flute and thats a healthy relationship? (sorry, I don't know if that's my normal thought process I'm in the middle of watching a video about characters with deep relationship problems(I'm not really sure why I'm watching it I've never seen or read the thing its about) by a relationship therapist so I'm in an alternate state of mind.)