I Think I Still Write About You the Most | Teen Ink

I Think I Still Write About You the Most

It’s a thought I have, as I lie on the crumpled top of me and John’s moonflower bedsheets, locks reaching across the cushions like the roots of a great oak. The words ring painfully true.

John has passed out beside me, nose tucked into the crook of my neck, snoring gently into the owl-hooting nighttime, where the stars glimmer right outside our second-floor window. The thin curtains blow into the room, stretching out to me invitingly. It’s calm.

He’s a dream man, I think as John blows cool air out from his nose and onto my collar bones. A dream man. A man with a house and a job and love in every chapter of his hollowed bones. He has an almost-beard and big, bleary eyes, that run over with tears when I ghostly dance across the splintered wood floor in our living room.

He reads what I write. My poems about love and loss and impossible feelings, that remind me of children’s music boxes and soft winds. He holds my shoulders and looks over the words on the page, when he’s made lunch. And he’s the goddamn king of cocaine.

That’s what I call him in my head, when I narrate my ever so still life, instead of writing a best-seller novel or a Shakespeare-play. The king of cocaine drains the last drops from the stained and unwashed coffee pot. He says he’ll clean it tomorrow. He never has.

He sings in the shower and urges me to touch his tightly trimmed head of hair, whenever he’s had a haircut across the street. His teeth are straight. His lips are soft. He’s the man I’m going to marry.

Tonight is a sleepy night, the ones we harbour to ourselves, after our weekly purges of cocaine. I slip John’s head off my body and push myself off to the floor. I look out the window, onto the clean pavements, where people in suits and dresses click-clack from street light to street light, on their midnight missions.

My gown follows me over the smooth floor and onto the rough ones of our open living room. John insists we must change the floor, but I love the feeling under my feet. It reminds me I am still alive.

My typewriter stands on the little desk, a small one, that only holds that, the typewriter. It’s shiny and green and John got it for me for my birthday two years ago. The old one sits in our closet, abandoned but alive and present. Sometimes I think to write with it, but in my mother’s voice I hear that I should never be ungrateful for the gifts in my life. I swear, I swear, I swear to live by that.

The clicking of the typewriter fills the living room and the bedroom and the entire apartment, separated scarcely by the open glass doors. And I write about love again. And loss. And impossible feelings, that remind me of children’s music boxes and soft winds.

John loves the clicking of the typewriter, says it’s satisfying. He says he loves to know I’m making something, shaping something like the light bulb in the washing-room basement illuminates the bare, dank walls. You never did.

You insisted I close the door and sit in the closet space when I write. Just because the clacking filled the old apartment, because it ticked you off, because the click-clack of the typewriter reminded you of the people in the street. You gave me love and cocaine for the first time.

You gave me my old typewriter. The blue one. It used to be shiny, just like the one John gave me two years ago, but it aged and rusted. You yelled at me when we did cocaine. You hugged me and cried the nights after. You said your parents were never good to you.

Funny, I think I still write about you the most.

And whenever John reads my work I force a heart-shaped smile, as he adoringly reads my poems and my dreams. He says it touches him to know how much I love him. He keeps some of them in his office-drawer. But they’re always about you.

You gave me cocaine and love for the first time, and you somehow never stopped. My addictions and my self-hatred. The way your typewriter calls to me.

It’s a funny thought, I think, but the tears that begin to drip onto the paper betray my dishonesty.

I think I still write about you the most. 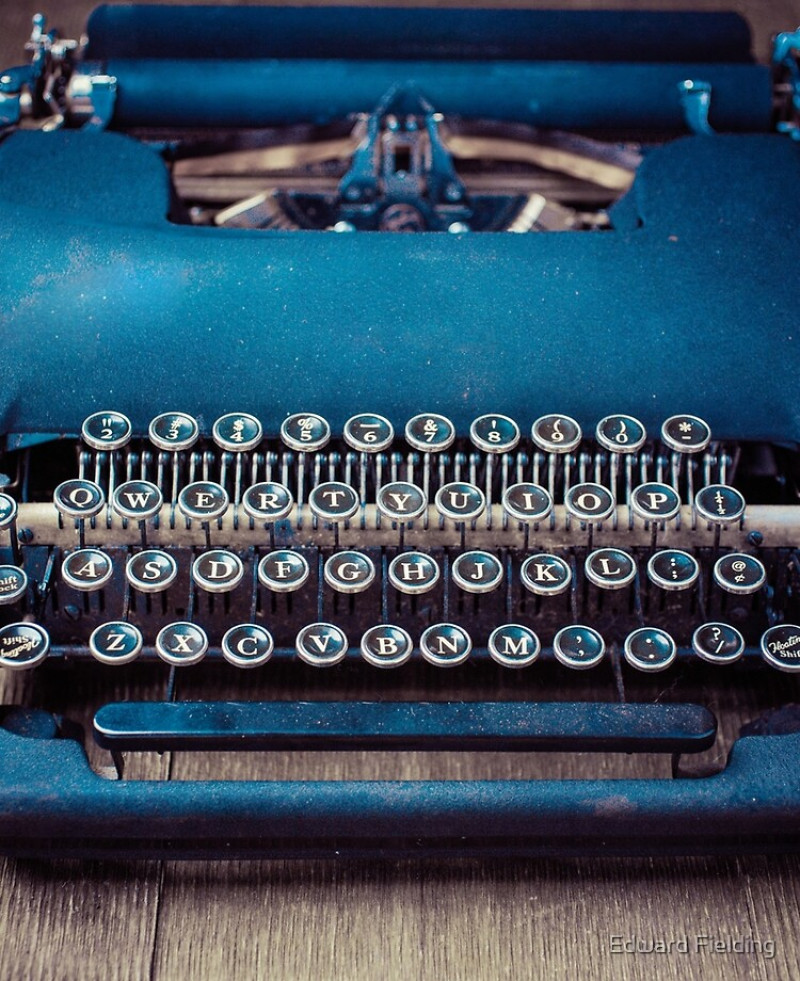 I quite liked this one. I can't tell if the ending is too rushed or not, but still, I think it sounds good. It's a fine example of how my short stories find their own symbolism as I write, and how it all comes together once just one paragraph is on the paper. It's incredibly satisfying.