Favorite Quote:
I have fought the good fight, I have finished the race, I have kept the faith - 2 Timothy 4:7

There was only one person in the room, but someone who wasn't me looked out from the mirror. I didn't think it was me, anyhow. She looked very different from how I felt. This person was confident and pleasant, and her lips curled like she was hiding an amusing secret. Her posture was impeccable without looking uncomfortable and showed off her gently sloped shoulders. They were mostly bare, and their softness accented the dulled blade that was her collarbone. Her hair was swept up, decorated with elegant pearl hairpins and a loosely twisted bun that looked light and full of air, almost like a cloud. But none of these things meant anything when compared to her eyes.

They were foggy and glinted like silver or bronze that hadn't been polished in years. They looked muted, like someone had taken her soul and smothered it with makeup and hairspray until it was hardly visible at all. Those eyes looked heavy under the weightlessness of her hair and serene features, and they startled me into losing my breath.

I couldn't move - I was transfixed on that image. When I was called back into the living room by my cousin I had to tear myself away from the mirror, but that girl was seared into my mind like a black brand. For the rest of the night, whenever I caught myself in the face of a reflective item, I would stare at it in terror, afraid to see her again. It was like she haunted me, followed me from that moment until long after the party was over. I felt a dangerous, feral urge deep within to get rid of her however I could, and when I got home and caught a quick glimpse of myself in the windowpane of my bathroom I felt my fear take me over. It caught me up in strong arms and encircled me until I was surrounded by it, but that wasn't enough. It had to take me completely. My mouth was pried open, and I felt the beginning of a sob start, but it never made its way out because that impulse started to crawl down my throat and drown me. It filled my stomach and made my lungs burn for air, and it worked its way into my limbs. My hand reached out towards the medicine cabinet on its own accord, fingering it open and feeling through the shelves until it touched cold metal. It withdrew clutching the hair scissors. My other hand slowly reached up to my head and began pulling out the pins until my hair had floated down to its full length, far past my shoulder blades.

Nothing could have stopped it, this instinct, from what it did next.

My mom found me later on staring back into the mirror with a defiance like no other scrawled crudely across my face. My beautiful, enviable hair lay in piles at my bare feet. Her only response was to scream and grab at her chest as if she felt a heart attack coming on. She began to cry and yell, but I didn't hear any of it. I was too busy reveling in my triumph.

Best yet, though, was this: there were no dying, muted eyes. There was no heaviness, darkness, or lack of soul. Those wretched things had been replaced with the most inspiring object I had ever seen, this being a blank slate. I had a second chance, the opportunity to save myself from soulful death. I could start over and decide what happened to who I was and who would look back at me when I looked in the mirror.

I just didn't know who she would be. 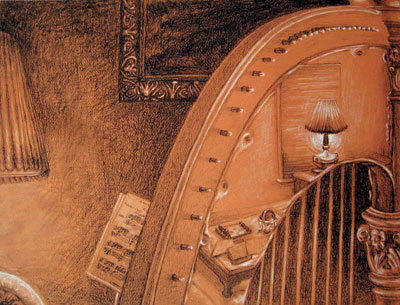