Edie’s dresser is on the north wall of her bedroom. It has four drawers: two large ones for shirts and sweaters and shorts and pants, and two small ones for underwear and blue socks. The handle on the sock drawer has broken off, but no one has noticed. When they do, probably sometime next week, reparations will begin without delay. Edie loves this drawer because it has all her favorite socks – blue, of course, being the only suitable color for a sock. She wore one pair today; another pair, as well as its corresponding outfit and last night’s pajamas, are in the hamper.

On top of the dresser is a handmade jewelry box that contains an extensive collection of plastic beaded necklaces. The lid has been knocked off, and a few silver beads spill helplessly over the edge. On a shelf above the dresser, Edie has displayed her porcelain animals. The complete zoo in its varying shades of brown includes a horse, a lion, a giraffe, an elephant, a dolphin, an antelope, two penguins, and a monkey. She’d like to play with them, but she cannot reach them herself. Beside the menagerie is a wooden kaleidoscope stand. It is missing, but the stand has an air of confidence about it. It is a masterpiece of its own.

Edie’s bed is just to the left of the west window. Her mother’s old quilt is tucked neatly around the twin mattress, its patterned flowers so faded from sunlight and overuse that the colors have all but disappeared. There are hints of red on the edges of a few tulips, but they are rather hard to find in the expanse of off-white stretched over the bed. There is a stuffed calico cat on the pillow that smells of tomatoes. He and Edie are generally inseparable, but at the moment he is alone on the bed.

Next to the bed, there is a nightstand with a small yellow lamp, with a switch that pushes in on either side. A wooden picture frame, suffocated with dried hot glue and a number of plastic jewels, holds a photo of Edie and her parents taken at the science museum last year. The nightstand drawer is full of trinkets Edie has accumulated from Christmas stockings and Happy Meals, the most recent a white barrette in the shape of a flower that she found in the park at the bottom of the tube slide. She thinks the barrette is beautiful, far too beautiful to be broken, so she never wears it. The rocking chair is usually next to the nightstand, by the window, but today it stands in front of the dresser, where Edie left it.

There is a toy chest in the corner. The long side used to line up with the wall, but earlier today it was bumped on a slight diagonal. Other than Edie’s collection of stuffed animals, the chest is full of costumes: princess dresses, pirate pants, clip-on earrings, plastic shoes. Only the fairy wings are missing, but they often are. Edie likes to wear them in the morning. At the moment, though, the wings lie in the middle of the floor where they were discarded mere hours ago. The wire edge of one wing is bent unnaturally. They wait in a gentle dusting of multicolored glitter, skewed, enchanting. Nearby, in the shadows under the dresser, there is a round drawer handle. The backing is jagged where it snapped off, and a bit of blue fuzz is caught in the uneven grain.

On the floor beside the sharp corner of the toy chest, there is a broken kaleidoscope. The metal frame rests just a few inches from a shallow scratch in the floorboards, and hundreds of colored glass shards lie in a brittle, magnificent halo around it. They reach every wall, every corner. The kaleidoscope frame is bare now, a skeleton of its former glory, and Edie has been picked up from the floor, bent wings tossed aside. All that remains in the bedroom is a feeling of blissful uncertainty.

Everything is quiet. Afternoon sunlight fills the room with a cautious, optimistic tenderness, and the porcelain animals on the shelf release the silent breaths they have been holding for so long. For a moment, the accident is forgotten. Time has started moving again, but this time more slowly, to let these few drowsy seconds linger. The glitter from the fairy wings shimmers by the dresser. The glass kaleidoscope shards overflow with color and paint the floor with streaks of turquoise and fuchsia, violet and royal blue. A delicate layer of dust has drifted down from the ceiling, millions of snowy particles hovering lazily in the empty space of the bedroom. Heavy gold light clings to them, and they glow like stars. 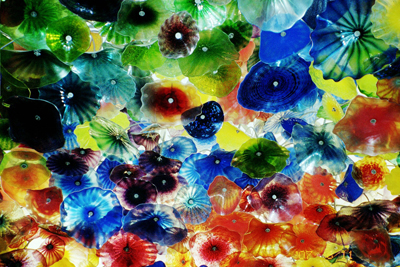 Favorite Quote:
"There is nothing to writing. Just sit down at a typewriter and bleed."
~Ernest Hemingway

View profile
The description in this is beautiful. Every object that you point out contributes to bringing the story together. Wondrous, and yet sad. I love it.