The hallway was more like a deep sea than anything else. And me? I was drowning. I saw the ruthless faces watching me as I gasped for air. I was falling deeper into the depths of the ocean and I couldn’t help it. I needed to be on land, but I couldn’t even swim past the heavy humiliation that was holding me down— a pull of gravity that was too strong to overcome. I pleaded with G-d. Please, take me anywhere. Anywhere but here.
You don’t understand what it’s like. The stares and the whispers. The guilt that builds up, even though it wasn’t you.  But, there’s no proof. That’s the worst part. I was walking through a crowded hallway, but I had never felt so unbelievably alone.
They had told me that I got off easy. They said that next time, I would be in a lot more trouble. But, I hardly listened. I didn’t care, because I knew that there would never be a “next time”. How could there be a next time when there was never even a first? My honesty could not stop them from believing the lies. People talked. And they talked a lot.
“How could a 13-year-old girl do such gruesome things?”
“I’m surprised it took so long to catch her.”
“There she is... back away!”
The voices ring through my ears every day. They’re all such a blur, but somehow each one has managed to individually find its way into my heart. They are just among the many things that are now buried down there, in a place so deep that I never even knew it existed. Until now. I really never should have known it existed, because a heart should only be filled with love… with compassion. This certainly was neither of those, and it was nothing to be proud of. This was something that nobody should ever discover, especially not an adolescent girl. It didn’t make me feel deep or special— it made me feel miserable, for hatred is a powerful thing. It takes you and drains the life out of you until you’re no longer yourself.
Who am I? What have I become? Am I really the monster that they all say I am? I just couldn’t think straight. All I knew for a long time was that I was utterly alone. And although time has allowed me to organize my thoughts, I wish that they had just remained jumbled. It would have been easier that way.
I still have no idea how I am going to survive the next four years of high school in this town, but I do know what I want. It’s just one thing, but it’s the one thing that I will never get: a re-do, another try. This time, I wouldn’t be so naïve. I wouldn’t risk everything just to get my heart in such a state that I wish it was just broken. A broken heart could heal, but a contaminated one could never go back to exactly the way it was before. Like a physical change versus a chemical change. When a heart is contaminated, it will never feel full again.
I can’t believe that this place in my heart was once filled with love. Love for the same person who has now filled it with so much hate. Love for a person who I thought loved me back, but was using me all along. A person who tricked me.
The person who I hate most in this entire world.

The person who ruined my life. 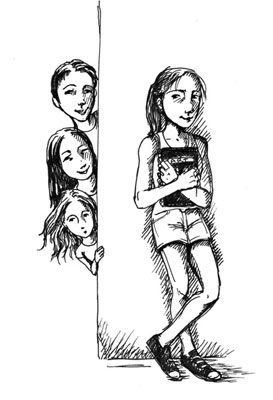 I love to write. I always have. As I observe people in the hallway at my school, I like to make up stories in my head. It gives me inspiration. This peace is fiction, but elements of it are based on true events that I have witnessed in my middle school years. As I move on to high school, I wonder how certain people will deal with new and different situations. I hope for them and I feel for them through my writing.

View profile
@shinebrightxoxo Sorry it took me so long to comment. About the article- Love it ! You keep the tension strung beautifully. At the end of this piece,I just grabbed my screen and yelled 'I must know what she did!'
Allen. PLATINUM said...
on Feb. 19 2015 at 9:27 pm
Allen. PLATINUM, Palo Alto, California
32 articles 9 photos 525 comments

View profile
Very well done. I was slightly confused while reading as to why they were gossiping about the main character, but other than that, I could tell there was a lot of emotion.
Beila BRONZE said...
on Feb. 19 2015 at 6:25 pm
Beila BRONZE, Palo Alto, California
3 articles 0 photos 516 comments

View profile
I loved the concept that you described of finding inspiration in the other kids walking down the hall. We need more people who can understand someone not like them and tell her story from the heart. At times, I felt like your writing was really strong, and at others, I thought you tipped the balance of "show vs. tell" a little too heavily toward tell, but the start and end were both really strong. Overall, great work!
shinebrightxoxo BRONZE said...
on Feb. 11 2015 at 9:58 pm
shinebrightxoxo BRONZE, Roslyn, New York
3 articles 0 photos 4 comments
View profile
Awesome writing- love it!
lovetoread said...
on Feb. 5 2015 at 3:00 pm
What a wonderful piece of writing! I can't stop thinking about what this girl was blamed for...... WOW!