In the streets of Jaseville roamed an oversized cat. He hissed at every passerby, pointed ears twitching. Did some merciful person try to throw him a piece of salmon he would rush at them, incisors yearning for a bite, and then back off at the last second. He belonged to nobody and lived nowhere. My older brother Jeff told me he made a living by nibbling on poor smaller cats that made the mistake of coming near him. But I think he swallowed the carton boxes thrown outside by the shop-keepers.

We named him Yikes because one day Father arrived home at 4:00 after working in the stores. Immediately he called Jeff to him. This was quite unusual that he arrived so early, so I followed Jeff to the car. “Jeff,” said Father, “I need you to help me get something out of the trunk.” He turned the keys and popped the trunk open. A toothy grin snapped at Jeff’s hand. “Yikes!” Jeff shrieked. It was the oversized cat – in Father’s trunk. His overgrown coat was like a mattress of coarse grey fur with fading brown spots. His eyes flared with a tint of red. He hissed at us, revealing his long, wicked yellow teeth simply thirsting for a bite of Jeff. Jeff backed off a few considerable miles.

“Don’t worry, he’s injured. I saw him moaning by the post office. Looks like a hawk snatched his legs out of place,” Father said, grinning. At this the cat seethed, yanking his silvery teeth in Father’s direction. His broken legs cut his mission short, yet he still sat solemn in position, puffed up and angry. Jeff had made his final decision. He turned around and walked away. I had to help carry Yikes into the house.
Mother fixed up bandages and warm water. It took seven neighbors pinning him down and nine scratches to get his legs bandaged up. The mean old cat thanked us by curling up under Jeff’s bed and pretending to sleep. Jeff had barely crawled into bed at night when Yikes began screeching and flailing. Jeff leaped to the ceiling and flew out of the room, screaming as if a ghost was at his heals. We tried to get Yikes out from under his bed, but the cat insisted on clinging to the bottom side of the mattress. “Well,” said Mother at last, “he’s stubborn. Why don’t you just go to sleep and forget about him? I think he’s tired out. And his legs are all bandaged up. He won’t be able to crawl out by himself anyway.” But Jeff would have none of it. “He’ll wedge his razor-sharp claws through the mattress and get me,” he said. He refused to enter his room and agreed to sleep outside on the doormat instead, if that would offer him any protection from Yikes.

The next day Yikes was asleep. “I told you he’s tired out,” said Mother. Jeff disagreed, and I decided to keep my distance just in case. The door to my brother’s room remained locked. After several days Yikes’s health began to improve significantly. We let him out on the porch. He would stay there for hours, screaming at every passing car. Every once in a while a car stopped at the curb near our street. Someone would walk out, lean over our fence, and take the time to stare. If there was anything at all good about Yikes, it was this: he was attracting visitors.

I myself began to wonder about that Yikes. I had always wanted to have a pet and was cheered by the thought that maybe Yikes would be our pet cat. However, as I thought the matter over, I decided this was impossible. Yikes was not a normal cat. Why was he so big? Why was he so wild? Why did his tufted ears twitch constantly, just waiting to find someone to attack? I brought up the matter to Jeff.
“Why,” he said, “Yikes is a bobcat.”
“A bobcat!” I shrieked. “What is a wildcat doing in the streets of Jaseville?”
Jeff shrugged. “He used to belong to someone,” he said and left me to turn the matter in my mind.

Once Mother gave me a bowl of leftover fish to take to Yikes. I slowly opened the front door and peeped out. There was the cat. He crouched on his front legs, glaring at me, just waiting for me to come out. The mission had to be done; I placed a foot around the door and quickly set the bowl on the floor. Yikes sprang to action and barely missed clasping my hand between his jaws – I slammed the door closed just in time. Mother, Father, and I took turns feeding him. We were always given the same greeting.
Jeff stayed as far away from Yikes as he could without completely moving out. At night he locked himself out of the house and slept on the doorsteps. During the day he ran off with his friends or locked himself in the bathroom, armed with bottles of Pepsi to spill on Yikes should he come close.
As Yikes’s condition improved he began to leave the porch for days at a time. “He’s a wild creature,” Mother said. “He needs the outdoors.” And one day Yikes left and did not return.
We thought we would never see him again.
Until one day, Father arrived home with a burlap sack stained with blood in the car trunk. Jeff jumped back, just in case. Father smiled. “Don’t worry, he’s dead,” he said, “the terns pecked the juice out of him.”
Silently, we all stared at the lump in the bag.
Father shook his head. “He was a brave cat,” he said.
“That evil, cruel –“Jeff began.
“He spent his whole life in the streets. With no one to care for him. He even survived the hawk. His toughness was necessary.”
We held a solemn funeral in the back yard. 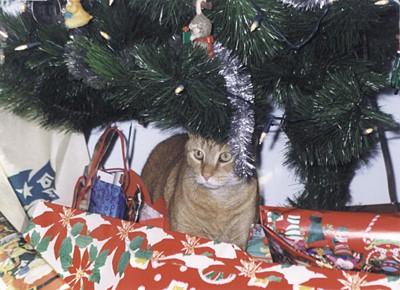 View profile
I really like your story :) you write very fluently and it's very fun to read!  There are some grammar spots (especially the third sentence) but they're not distracting at all.  I only mention it because, for the life of me, I can't think of any way to make it better!  well done!
Longlegs GOLD said...
on Aug. 15 2014 at 1:05 pm
Longlegs GOLD, Greeneville, Tennessee
16 articles 0 photos 84 comments
View profile
Thank you so much! I didn't even know someone commented on this. For some reason teen ink didn't send me an email.
EmilytheBelleofA. DIAMOND said...
on Aug. 10 2014 at 11:37 am
EmilytheBelleofA. DIAMOND, Athens, Georgia
81 articles 5 photos 1486 comments

View profile
I loved it. It was solemn and sad and beautiful at the same time. Thank you for sharign this.