Are You Alright? | Teen Ink

Favorite Quote:
how do i get out of this labyrinth?

I had changed a lot since then. It wasn’t that much different than what I am used to. We still had to sit in classrooms and learn. We still had to eat lunch at a certain time and be in bed by a certain time, but jail has a way of making a person feel guilty about themselves. I used lay awake, staring at the ceiling. I thought of different things when I was doing this. I thought about how the only way that I could see my parents was through a thick sheet of bulletproof glass. I thought about the things I lived for. They were down to single digit numbers. The one thing I looked forward to after a long day, was gardening. I took it up as part of my therapy and it became my passion. It became so fascinating to become the reason that something could grow and live. I met most of my friends there. We didn’t talk about what we were in for. We always said that we are different people than who we were before.
We all had a preference in plants. Maya loved carnations, because her family would always put out a pot of carnations on their porch every spring. My passion was growing herbs. I loved the smell of the jasmine herb when its scent rubbed off on my fingers. I would sneak sage out of the green house and mix it in with the boring prison soup. I had taken to chewing mint leaves throughout the day so that my breath would smell fresh. I would even chew mint leaves when I was gardening. Our instructor and supervisor was Ms. Ivory. She’d always been like our mother. She cared for us and if we ever did something wrong, she would drive to the detention center and be the first person to scold us. We would meet every day in the prison green house at 4:00 sharp. Ms. Ivory hated anyone to be late.
It was April when Maya started missing meetings. She talked to me less and less. She was quiet when she was working. She just stood in her corner of the green house, tending to her carnations. She would walk through the yard as if she were a ghost. Then she would sit on the seat of a table and stare out into space. “Maya, are you okay?” I asked her once. “I’m fine”, she said in a deadpan voice. I remember she never looked at me; she just stared off into the space between every molecule that composed the juvenile detention center.
She looked terrible. She used to brush her hair and put it into a neat ponytail. She would button her uniform to the second to last button and cuffed her sleeves to her elbow, but she wasn’t neat like before. Her hair was teased. She looked as if she hadn’t slept in days and she had buttons in the wrong holes.


Miss Ivory used to encourage us to talk, she said that it helped the plants grow and live. At that point she had stopped saying those things. She, like everyone else, stopped talking all together. Even though I had my passion for growing things, I began to dread these meetings. They stopped being fun and instead became work. At that point, I had given up on Maya. I didn’t know why she was acting the way that she was, but I had stopped caring. It had been almost a month since she began acting strangely and I had stopped questioning it. I walked out of the greenhouse to go to my cell, but I saw Maya walking. She was walking slower than ever, as if she was barely moving. Her face was pale and hollow. She looked as if she had seen a ghost. She looked like she was a ghost. It wasn’t like her previous odd self this was new. It was a look I had never seen on another person before.

“Are you alright?” I asked her. I wasn’t expecting an answer, but I asked because her face was a face that looked as if it had just seen the most traumatizing thing in the world. She broke down in front of me. Her sobs echoed throughout the hallways. “I’m turning eighteen tomorrow,” she choked out. She was crying so hard she couldn’t get anything else out, but she didn’t need to say anymore. Maya was an adult. She would be transferred to an adult detention center, where she will most likely spend the rest of her life. “There, there,” I said. “It’ll be alright. This too shall pass.”

It’s such a comforting phrase, “This too shall pass.” I always tell myself that when something bad happens. It is therapeutic to think that one day something will end. That was all that I needed to say. We stood there in mutual understanding, with her crying on my shoulder. It was unlikely that we would ever see each other again. She didn’t belong there, but she didn’t belong here either. She deserved to be free. She was the nicest person I had ever met. Whatever brought her here; she was probably forced to do it. After about fifteen minutes, she collected herself and went to bed early. That was the last time that I saw her.

I got out a few years ago, but I still garden. We have a community garden at the bottom of my apartment building. I still chew on mint leaves throughout the day and put sage in my soup. I still think about what I have to live for, as I lay awake in my tiny residence. It’s amazing how little I have changed since I was in prison. I still drive to the prison. I go there every week and help Miss Ivory teach the inmates how to garden. It makes me sad to see all of the girls in there that don’t deserve to be. It wasn’t that long ago when I was in there, but they don’t look sad. They look content, at least when they are gardening.

I try not to bring up my time in the detention center as a topic of conversation. It’s not a part of my past I want people to know about, but it’s hard not to talk about it. Some of my fondest memories were in that small prison greenhouse. There I learned my passion and a tradition I uphold each year. Every spring, I put a pot of carnations on my fire escape. Each time I do, I think of that girl I knew so long ago, and I smile. I look at the head of the flower, and I hope that wherever she is, she’s doing the same. 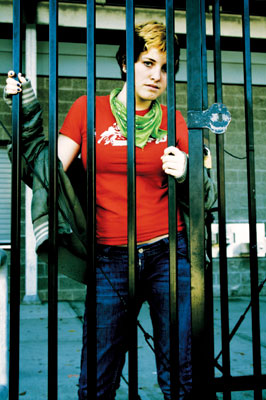 Favorite Quote:
"...In fact, most of the time we felt like lobster in a boiling pot of water. Seemed like that was what we were, though. Being left to sweat, killed slowly, and then finally eaten with a side of butter." (From my novella about zombies)

Favorite Quote:
"...In fact, most of the time we felt like lobster in a boiling pot of water. Seemed like that was what we were, though. Being left to sweat, killed slowly, and then finally eaten with a side of butter." (From my novella about zombies)

View profile
I love how you can idirectly see how their friendship is so strong under the circumstances; I guess other than when the narrator stopsc caring, but what else is she to do? :D Brilliant.   Cheers.