Favorite Quote:
"After every storm, theres always a rainbow..."

My eyes dart around the white walls, the lights reflecting on the shiny floors below my feet. Pictures are planted here and there to make it not seems so empty and lifeless in this old place. The smell though, there is nothing they can do about that. Far to sterile. Nothing like the ranch where I was use to seeing my Mamma. But things have changed since then, she is no longer the woman she use to be, no longer the woman from my memories.

I can still remember her coming into my room at five in the morning, even when summer was long here and school was over and flipping on the light. Her southern twang of a voice chirping louder then the chickens that liked to nest right outside my window. "Mornin' sunshine. Time to get 'er up. Horses ain't gonna wait all day," she'd say as she yank the quilt off of my feet which would make me groan and moan, not wanting to get up. But… eventually I would slip on my old boots, pull my hair into a ponytail and join her in the barn.

Sometimes I wondered if those horses meant more to her then I did, but I can look back now and realize that those were stupid thoughts. I was her baby girl. The horses came a very close second though. Mamma had worked with them all her life. The walls of our house clearly showed that. Old black and white pictures here and there of a brown haired little standing up in the saddle of a spotted pony, or her heels digging into the sides of a black horse as it raced around barrels or after cattle. Ribbons and trophies plastered shelves, and an old saddle sat in the corner, dusty and well worn… but it was her's.

She was a tough woman, always had been. She busted horses nearly every week, hung on tight as they bucked and reared, trying their hardest to get her off their backs. Her hand was always placed firmly on the horn of that old dusty saddle, the other gripping the reins loosely, never pressing a spur into the animal's side. She'd just let the horse buck it's heart out before it grew tired and stopped to listen to her soft words and commands. Sure she had broken bones and left and right, but she never quit until the horse was following her around like a little puppy, calm and collected, respecting her and not fearing.

That was my Mamma for you, though. Had taken so much pain in her life. Ran the ranch and raised me like it was nothing. She use to always say, "I don't need no man, Eliza baby. I can do it without the help of any man. Just watch me." And Mamma did. I can't remember it really… but she had said that my father had left us when I was about three. She always said he was never a man, and I believed her. It made more sense to me when I got older though. What man would leave their wife and baby daughter?

It didn't matter to me. Never did. My mom was all the dad I needed in my life. She was the one that seen me off to school every morning. Seen my graduations and plays every spring and fall. She was always there in the audience, clapping at just the right time, even when no one else did. There was something else she taught me too, something that meant more to her then it did to me I am sure. She was the one that taught me to ride. Taught me to give my heart to a horse and I would never be hurt. Showed me that just a little tenderness could go a long way. Mamma had made me believe that I belonged on that ranch with her forever…

But nothing ever lasts forever. I had moved out to go to college after high school, left my mom with her horses for many of years, but I would always return to her each summer. Help her break in the young horses. Spend days in the saddle with the strongest woman that I had ever know.

That's why it killed me to see her put into this horrible place. She was taken away from all her horses, away from the place she had so lovingly called home for more then fifty years. I couldn't see her hurt again… not the strongest woman I had ever known. It had killed me to find her in that old barn, scared to death because she had no idea who I was or where her horses were. It had taken me two hours to get her to realize that I was her baby girl. That her horses had been all sold off two years before when she had broken her hip.

Shaking my head, I let out a little breath as I come to the door at the end of the aisle. Room three-fifteen, the Alzheimer's wing at St. Christian's Hospital. The last place I wanted to see her, but the best place for her. She couldn't remember much anymore. Couldn't remember me or any of her doctors here. There was only one thing she did remember.

Each one's name. Every color. Every marking. What stall they had been in and when she owned them. I would come in some mornings and find her searching through her little hospital closet for jeans to pull on to go take care of her horses. It broke my heart to tell her they weren't there. That outside that heavy hospital door where were only empty hallways and not a soft noses of horses and little nickers to greet her. She would always frown and her eyes would go glossy again. She wouldn't talk the rest of those days, only stare out the window to the concrete city below. I often would wonder what she was seeing through that window. Surely not those cars and buildings of the busy city.

Some days she would go on and on about shows that had happened fifty, sixty years ago. About how she roped off of her old gray gelding Buck, or how well she ran barrels that day and how well her little pony had done. Sometimes she would even complain about how that rotten old cow dog would ruin her runs by barking and chasing Buck's heels. She'd laugh though about how those two critters would romp and play when she turned him out to pasture. I would just fight away tears as I sat and listened about things she had dreamed about that day. I often wished I could go back and see each and every one of her memories.

I stood outside of that door for a long while and I prayed thattoday would be a good day before I slipped inside to see her sitting by the window like normal. Her hair was no longer brown as it had been in those old pictures of her and the horses that I still kept on my walls and shelves, but a soft silver. Braided to fall down her back as it had been for years. Her grey eyes looked out to the city below and she smiled a little when she heard the door close.

I stopped dead on my feet, shocked. She had said my name for the first time in so many years. I could feel my eyes well with tears as I sat my purse down and went to her side. I took her smooth cool hand and my eyes met her's. A matching pair.

"Yes Mamma?" I asked softly, a spitting image of her in her youth.

"How's my little cowgirl? How are the horses today? Good? Hopefully I can come out and see them soon, right Liza? Go riding again, maybe?" she asked and her voice chirped still with that sweet southern twang as it did in my own memories.

I let out a little laugh as I wiped the tears from my eyes. "I am good Mamma. So are the horses… they miss you a lot." I choked a little on my words. It hurt so bad to say that. To lie to her… but sometimes it was better to leave her in her dreams, to live out her last years lost in her memories.

She just smiled and her eyes turned back out towards the window. She stayed like that until I left. Lost in her dreams as she had so many times before, dreaming about riding those fields and chasing cows.

As I pulled into the driveway of the little two bedroom house I call home settled on only an acre of land, my heart skipped a beat and a smile spread across my lips as I watched my little girl in the front yard. She 'galloped' around with a stick horse tucked between her knees, her little fingers curled around the fake bridle. Her long brown hair fell behind her in single braid, hanging out from under a tan cowboy hat.

Stepping out of the car, I watched her for a moment before shaking my head. "Marie," I called and she looked up and grinned at me, missing her two front teeth. "Mamma!"

My eyes grew teary again and I smiled a little. I seen so much of my mother in her. That little smile, those steely eyes… that love of horses that just didn't seem to die in either of them. I knew what I had to do. I knew I had to be strong for my baby girl, and give her exactly what my Mamma had given me.

"How would you like to ride a real horse?" 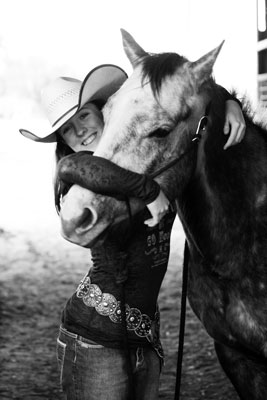 The author's comments:
Hoses have played a large part in my life. I was inspired to write this by Templeton Thomson's song entitled, 'She Remembers Riding' as well. I feel very connected to his piece and must say that I love it.
Post a comment
Submit your own

View profile
Great story. I am a reader who knows nothing about horses, but I feel as if I've learned a lot from your story. I must admit, I'm greatly jealous of your achievment :D But, I'm so excited that you recieved editors pick! Hopefully this story gets published! Great job and keep up the good work!