Regan stepped onto the elevator with Hugh. Even though the elevator was tight they fit in just fine. Regan pressed the fourth button, the top floor where her apartment was. They stood there as the rusted gold doors shut and the elevator creaked upward. Regan looked up at Hugh who head was hung low. He glanced up but when he saw her looking, he averted his eyes.
“Look, Hugh,” she began. “I’m sorry I didn’t talk to you today. My friends don’t really like me talking to you.”
He was silent. He clutched a book to his chest. Regan tried to see the title but Hugh constricted his arms so she couldn’t see. Regan rolled her eyes.
“Can you please just talk to me?” she begged. She didn’t want to lose Hugh. He was her best friend. Almost reading her mind, the elevator opened at the next floor. Michelle skipped in her pigtails and flouncy dress bouncing.
Hugh backed into the corner glaring at Michelle. She saw him and waved. She giggled and clicked the fourth button, even though it was already lit.
“How are you Michelle?”
“Just fine, how bout yourself? It was so good to go to the park with you today. Thanks for inviting me.”
Regan remembered how Michelle had been there but he never remembered inviting her. Michelle had this thing where she always knew where someone was and showed up.
“How are you Hugh?” Michelle piped.
He looked up first at her and then glanced to Regan. He glared at her and then turned to Michelle again. A smile broke out on his face and he said,
“Wonderful, Michelle. I was at the park too, by myself. It was quite relaxing.”
Regan frowned. She didn’t know why Hugh was being such a jerk. She had been in the park with him but she had ignored him. She didn’t want Jessica, or Tiffany to see her talking to him. They would laugh at her again. The last time she was talking with Morgan.
And speaking of Morgan, the elevator hit the third floor and Morgan joined the three in the elevator. Somehow when Morgan walked in, the elevator became larger and they were no longer cramped in the small space. Morgan smiled at all of them his wrinkles and crows feet made his face look like a prune.
“Hello everyone. Lovely day in the park wasn’t it?”
Everyone agreed except Regan. She had a fuzzy feeling in her head. Morgan noticed this and put his hand on her shoulder.
“Are you feeling alright, dearie?” in his sweet English accent. “You don’t look well. You should take some medicine to feel better.”
Hugh and Michelle’s faces looked up. They looked to each other and then to Morgan. He eyed them suspiciously.
“She feels fine. Don’t you, Ray?” said Hugh reassuring her.
“Yea she just needs to get her wallet and then we can have a night on the town!” Michelle squealed.
“I’m not so sure guys,” Regan slowly said.
They looked to her with sad and concerned eyes. Michelle hung her head looking the most depressed she looked today. Hugh sulked back into the corner with his book. Morgan’s eyes were sad but he was still smiling.
“I’ll just take some medicine and then why don’t we go back to the park.”
She heard the elevator ding as they arrived at the top floor. She stood in the elevator and let her friends leave first when she heard a voice.
“Regan, aren’t you getting off, dear?”
Regan looked up and saw Ms. Cattermeyer. Her friends were gone and the elevator was suddenly small again. She felt claustrophobic and practically fell out of the elevator. Her vision was blurry and she wanted her friends back. Where had they gone? She looked up and down the hallway and back into the elevator. There was no way that all four of them had fit in there. But how had then done it?
Ms. Cattermeyer called down the hall and a man came running toward her. He knelt down next to her and handed her a cup of water and a baggie of pills.
She swallowed them down fast and tried to ignore the feeling to spit them back up. Suddenly her vision cleared and she remembered.
“Are you feeling better, Regan?” The black male in blue scrubs asked her.
“Much better.”
“What were you doing with your friends? Jessica and Tiffany?”
“We went to the park and walked around. It was very nice. Peaceful.”
“And you’re other friends?” he looked up at her.
“I don’t have any other friends. They don’t exist. I’m a schizophrenic,” she sighed.
He nodded and took the cup from her and held her as she cried. 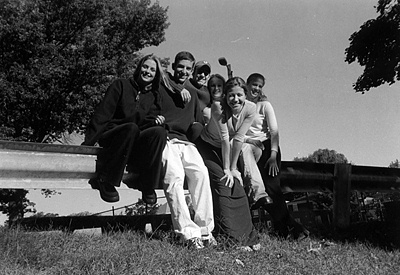 The author's comments:
From a elevator prompt. The elevator was extremely small.
Post a comment
Submit your own