So Far Away | Teen Ink

I watched in horror as the green car same at a straight shot for the old Chevy my best friend and I were sitting in at this very moment. My brother was outside the driver door trying to convince me to open it. I screamed for him to move but he couldn’t hear me over the screech of the breaks. I remembered watching the car smash into us, the twisting of the metal tearing into my leg and trapping it. The last thing I saw was my brother’s hand pressed against mine on the window, my best friend screamed as the world went black.

When I came to I was in a hospital bed with tubes in my arm, I freaked out and tried to jump up to go find my brother and best friend. But I was met with a horrid pain along the left side of my body. I clutched my head in pain, to find it bandaged. My vision had gone fuzzy from sitting up so quickly, when it refocused I saw my best friend sleeping in a chair next to my hospital bed. She had stitches in her lip and forehead. My brother however was nowhere to be found. I asked about him, and she broke down in tears, clutching my hand. I asked the doctors what had happened to me. I had three broken ribs and my lower leg had been shattered from the impact. After a few days the doctors allowed my best friend to take me to my brother’s room in the ICU. He had hundreds of tubes pumping stuff in and out of his body. I let a small scream escape my lips as tears streamed down my face, his girlfriend, my best friend, was by my side crying. In a week they let me leave on crutches.

Our passion had been marching all three of ours. My best friend had gone back to it while I hobbled around on crutches at the hospital with my brother. In his room we had put a picture of the three of us in drum corps uniform from our first season, with my tenor drums on and his snare, with her bass drum. We were smiling and laughing, I wanted it to be the first thing he saw when he woke up, if he did.

A season passed and I stayed in the front ensemble while my best friend marched. The nest season I was last snare, I used my brother’s snare. I felt so close to him with his snare even though he was so far away.

The last competition came and my best friend and I were in our apartment getting ready, in full uniform we found my brother’s revolvers. I put his snare drum on and with drumsticks in one hand and a gun in the other. I called us to attention. Then gave a tap off and rather than stepping off we stared into each other’s eyes as we pulled the triggers. The gunshots rang out and rattled my blood splattered snare drum. We were with my brother again. 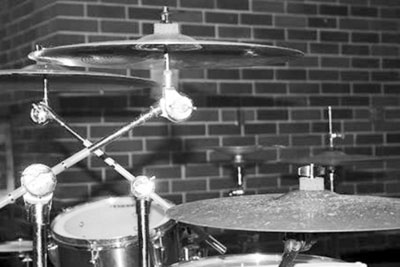 The author's comments:
Based on a nightmare I had involving my best friends and I.
Post a comment
Submit your own