Today is the first anniversary of my dad’s death. It’s only been one year, but nothing is the same. I am one year closer to my graduation, wedding, and the birth of my first child; my dad will never see any of these things. It seems inappropriate for me to be at the mall today. I want to be alone so I can grieve in the privacy of my room, but my mom seems to think I’ve already done enough of that. So she sent me Christmas shopping. Another Christmas dad won’t be here for.

I had to stop after the first store; I just couldn’t handle it. All I could see were the things I wanted to get dad. I’ve been sitting in the food court for an hour or so now. I want to go home, but if I leave too early, mom will get upset. She doesn’t think I’m handling things well. Across the food court, I see a little girl with her father. I doubt she’s more than four. She can’t seem to keep still. I’ve seen her stand up and sit back down more than a few times now. Her dad is laughing at her. He looks like a nice man. His hair is darker than dad’s, though, and his eyes seem rather squinty. Dad’s eyes were nice. They were warm and inviting. The little girl is standing again, tugging at her dad’s sleeve as he tries to finish his slice of pizza. He pretends to ignore her but he can’t quite hide his smile. He begins to eat slowly, taking nearly a minute for each bite. The little girl says something, stamps her foot, and her dad bursts into laughter. This man laughs too much. It’s not right. Dad’s laughter was harder to earn. He smiled easily, but I always felt a surge of satisfaction and pleasure when I was able to wring a belly laugh from him. The girl has begun to pout, but when she sees her dad stand up and throw away his trash, she begins hopping up and down with what I can only assume is excitement. The man laughs again and takes her by the hand. They go off together: the man walking, and the girl skipping. I want to follow them. I don’t know why, but I do. So I follow them.

The girl alternates between skipping and hopping. The dad calmly walks beside her. He doesn’t walk right. His strides are too short and too quick. He slows down when he sees a window display he likes. The girl doesn’t seem interested in those displays; she tries to keep going. Each time this happens, the dad merely laughs and lets the girl tug on his arm until he’s done looking at the display. He’s too patient; dad wouldn’t have let me pull on him like that. When they begin to approach the toy store, the girl starts to run. Finally, the man does something right; he stops her after only a few steps. That’s good; dad was always big on self-control. They haven’t noticed me yet. The girl is oblivious to all things unrelated to the toy store and the man is focused on her. When she speaks, he looks at her intently; he doesn’t let the chaos of the mall distract him. I can’t decide whether I should follow them into the store. I need to keep watching them, but they’re more likely to notice me if I follow them into the small store. I decide to sit on a bench a few stores down and wait for them. I know I’ll have to stop watching them at some point. They’re sure to notice if I follow them out of the mall. I decide I’ll stop when they reach the exit. They stay in the store too long; dad would have made me decide on a toy long ago.

When they finally emerge, the girl is beaming as she holds two shopping bags so large they drag on the ground as she walks. The dad laughs as he takes them from her. I get up, stretch, and follow them. It doesn’t take me long to realize they are heading for the exit. Despite my earlier decision, I can’t quite make myself leave them. The girl seems to be tiring. Her dad picks her up and she lays her head on his shoulder. Suddenly I feel nauseous. I stay where I am as I watch them walk out the store and cross the crowded parking lot. I can’t seem to move.

This parking lot always made me nervous when I went here with dad. The cars always went to fast and they never slowed down until the last possible second. I can still see the girl and her dad, but now my focus is on the car racing to the exit. Suddenly, I can move again and I’m making my way to the crosswalk. The car I originally noticed is gone now, but there are plenty of others. Within moments I see another promising one. It’s rushing at me. I close my eyes, whisper to myself, “I’m coming, Daddy,” and throw myself into the street. 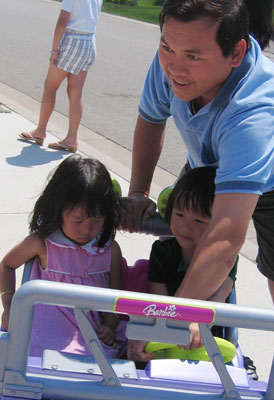 I was given a prompt in my Creative Writing class.