cursing her own pretentious nature, liz stomped out of the library empty handed. the doors whooshed open independently, bombarding her with cold air and allusions to some old cartoon she watched as a kid, one of those memories that is unearthed only as a flash of an image or a fragment of a sound byte. “open sesame” she mutters to herself before pressing onward into the chill. it is much too cold for flip-flops and the beginnings of this fall’s frost nip at her toes. she wonders if her friends would consider this imprudence dumb or badass. at the corner a car is idling and she can her the punk rock tumbling out the open windows, dragging her back to so many bars, so many X’s on her hands, keeping her from the otherwise ubiquitous PBR. She wonders if she should recognize this song, but as much as she professes to love the originality of punk, it all meshes together in her head like one great fuzzy stew of desperate shouts and independent labels. as she passes under a streetlight it flickers on, as if some brilliant conclusion has been reached, and she feels inexplicably guilty for her lack of meaningful thought. and where she has halted a black cat streaks across her path, or maybe it was a skunk; she marches on. past one house and her face is lit with the flashing colors of the all-holy monday night football game. another house and she can her the discordant moans of an unwilling pianist. at the next house someone incessantly, determinedly throws a basketball at a net, the rhythm of the ball to the ground soothingly erratic. and another house passes, and another and another, until she finally stops before the door of her own house, distinguishable only by the ghosts of memories dancing up the drive or stomping down the stairs. In her minds eye she sees her grandmother beating a carpet on the porch and her brother reading in the window seat and she knows that this is her sanctuary. 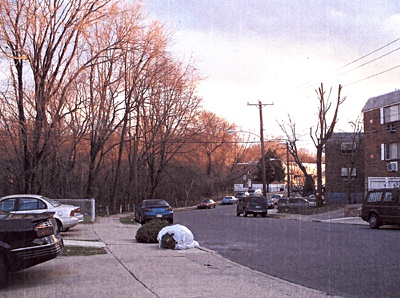