My Play On Love | Teen Ink

My Play On Love

Barbie and Ken used to be the highlight of my knowledge on relationships. Those two plastic dolls could read my curious six year old mind better than I could read a book cover to cover. Barbie knew that my favorite room in her decked out three story playhouse was her golden, apple-themed kitchen. So, she aspired to be the best cook my playroom had ever seen, with Ken as her brilliant accomplice. Those two, excessively tanned and all, always knew the most romantic places for the perfect date and how to resolve even the most brutal arguments. They were my best friends- my innocent little secret.

So when Barbie forgot to buy the most important part of Thanksgiving dinner (the mashed potatoes of course!), Ken generously stepped out to run across my playroom to the Shop’N’Go provided to me as a birthday present. Being in such a hurry, Ken forgot to look both ways before crossing the street; he was harshly reminded by Fluffy, my black lab. Shining eyes and tail wagging more frantically than a tornado, Fluffy gobbled him up like a shark would an irresponsible surfer. And that was the horrid end to my beloved Ken.

Ken’s funeral devastated both Barbie and me for he was my only male doll. Who was Barbie to bake pies with and go on romantic walks with now? After being rejected time after time and tear after tear by my parents for a new doll, I was hopeless; Barbie and I were left with her friends Chelsea and Kendall. They weren’t as handsome as Ken or nearly as thoughtful or kind. They didn’t have the whole chivalry thing down as dream boys were supposed to, and they were nowhere near being male. Still, the brunette and redhead replacements would have to do. At least they weren’t chewed to pieces by Fluffy. Most fortunately of all, they weren’t Bratz.


As the peaceful snow of winter transformed into the rambunctious flowers of spring, Barbie hosted all girl parties, taught her friends to cook, and seemed to gradually forget about her dear Ken. Her attitude wore off on me and I found myself feeling the same. Who says Barbie and I needed a man to live? We were perfectly stable all on our own. Barbie even started her own business- a four star restaurant that inched closer and closer to that fifth star every day. Something good even came out of Ken’s catastrophe; Chelsea and Kendall had become great company and even better friends.


There was a day, though, that changed my whole outlook on life. Barbie and her friends had taken a vacation to the living room for the week where my mom happened to be watching one of her sappy soap operas that she couldn’t get enough of. Barbie mistook it for a movie premier and convinced her friends and me to settle down and view the show. I didn’t understand a lot of it, being unfamiliar with the characters and most of the adult content, but Barbie was enjoying it. I figured, ‘Why bother?’


While paying more attention to my mischief-eyed dog glaring from across the room than to the television, I wished the show to be over so Barbie would pay attention to me again. After a quick commercial of the Kool-Aid man raiding yet another child’s house (he better not come here and mess with my playroom, I had thought), the soap opera flashed from scene to scene with crying mothers and over excessive muffled hugs. Just as I was about to doze off, an interesting scene caught my attention. There were two girls dancing in a dimmed place with lots of people. They seemed as if they were having the time of their lives and witnessing their excitement and happiness for life was enticing. I was just about to decide that soap operas weren’t so bad after all until the unthinkable happened.

Mouth to mouth, lip to precious lip, they collided. It was exactly like Barbie and Ken when he was still alive. Eyes closed and bodies crushed, the girls held for another second in the embrace and shifted away, smiling devilishly.


Now I was shocked, as if I had been struck by lightning. First I believed I was merely dreaming- that I was engulfed into one ginormous nightmare. When my pinch failed to relieve me, I thought I had imagined it. Kisses were meant to be shared with mother and child, owner and dog, boy and girl! Not girl and girl! I felt obliged to ask Mom how that could be and why they weren’t being scolded by their own mothers for bending the status quo, but I couldn’t bring myself to. Maybe she would never let me watch again. Confused as I was, I certainly knew one thing. My curious being was yearning to see it again. Even thinking about those girls sped up my heart while rebellion ached in my heart. And I knew for sure I liked those feelings.


Later on after Barbie and her friends returned to my playroom, they agreed that they wanted to watch the show again. They also agreed that the incident with the two girls was something they’ve never seen before. Barbie suggested that maybe we should try it. From that moment on, I never needed a Ken again. 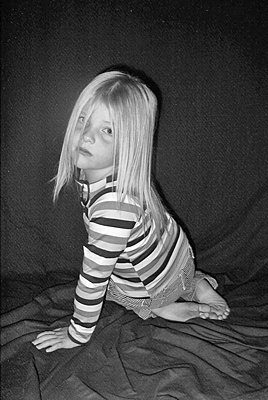 Favorite Quote:
"Time goes by so fast, people go in and out of your life. You must never miss the opportunity to tell these people how much they mean to you."

Favorite Quote:
Everything happens for a reason

View profile
I am.... stunned. Utterly and completely amazed. This story pretty much completely describes what I was like as a kid. I loved it. Great work.
WSwilliams GOLD said...
on Aug. 1 2012 at 11:50 am
WSwilliams GOLD, Toronto, Ontario, Other
12 articles 3 photos 95 comments

View profile
well.... all i have to say is that you have an incredible imagination and great prose. and you must have really loved barbie dolls xD
Apollo77 PLATINUM said...
on Jul. 24 2012 at 8:49 pm
Apollo77 PLATINUM, Brunswick, Ohio
20 articles 0 photos 103 comments

Favorite Quote:
"All you have to do is write one true sentence. Write the truest sentence that you know.”
"Madame, all stories, if continued far enough, end in death, and he is no true-story teller who would keep that from you."
-Ernest Hemingway

View profile
I think this is a logical play pf events that shows the thought process and innocence of a child really well. It was captivating!
WhenItRains21 GOLD said...
on Jul. 22 2012 at 6:19 pm
WhenItRains21 GOLD, Magnolia, Texas
12 articles 0 photos 54 comments
View profile
I have to agree with the other commenters. This is beautiful, and very well written. It seems like a memoir, not a piece of fiction. The end is unexpected, but I feel like it wraps up beautifully. It leaves you thinking. It has a very professional tone to it. I loved it!
Smile-And-Wave-Boys. SILVER said...
on Feb. 20 2012 at 12:49 pm
Smile-And-Wave-Boys. SILVER, Rotherhithe, Other
8 articles 1 photo 38 comments

View profile
It's incredibly written, and the innocent approach to a 'sensitive' subject like this a really good idea. While I was reading, I had to remind myself it was fiction, it had a truthful feel about it, if you get what I mean. Well done, keep writing!
JoPepper PLATINUM said...
on Feb. 18 2012 at 12:03 pm
JoPepper PLATINUM, Annandale, Virginia
35 articles 0 photos 782 comments

View profile
I really liked how you made the little girl and Barbie seem like real people. The little girl's confusion when she saw the two girls kiss made this story really good too! Keep Writing!!! :)
FluteFreak SILVER said...
on Feb. 18 2012 at 11:31 am
FluteFreak SILVER, Auburn, Indiana
8 articles 0 photos 43 comments

Favorite Quote:
Never Give Up, And Know That God Will Always Love You!

View profile
Wow...this is the best piece I've read on here in a looooong time. You did an amazing job with every aspect of the story. There wasn't a single moment where I was bored. Amazing job, really!
LoonyLoopyLupin GOLD said...
on Feb. 12 2012 at 12:25 pm
LoonyLoopyLupin GOLD, Raynham, Massachusetts
13 articles 0 photos 52 comments

View profile
MAN! The introduction to the main idea through the eyes of a little girl is pretty awesome. :) The description is great. The comments from the girl in the writing makes it light and real. I realllly like this.
SpringRayyn PLATINUM said...
on Feb. 11 2012 at 10:55 pm
SpringRayyn PLATINUM, Lakeville, Minnesota
34 articles 2 photos 658 comments

View profile
I like the interesting way that this story is told. You are really good at telling through the eyes of a child, something I can tell you, I'm impressed at. I don't even think there's any critique I can say at the moment, just this is a extremely well-told story.
FireIgnited said...
on Feb. 11 2012 at 3:08 pm
FireIgnited, Valley City, North Dakota
0 articles 0 photos 29 comments
View profile
A very innocent and delicate take on a subject that's usually harshly controversial. Great job!
Stormy9890 BRONZE said...
on Feb. 11 2012 at 12:45 pm
Stormy9890 BRONZE, Knoxville, Tennessee
2 articles 0 photos 23 comments
View profile
I like the idea!! Everyone should love who they love, boy, girl, or otherwise, and this is a great story to tell! I how it's not so fast pased too!