Think of it this way. There are two roads. And they’re going in opposite directions. Isn’t that always the case? They go east and west, spanning on forever, right up until the vanishing point swallows it. And once you reach that, there will be another vanishing point. You know you’re never going to reach the end of that road. So flip a coin, choose at random, just start walking. It doesn’t matter. It’s gambling, picking a road to follow. It’s no better than a roulette wheel.

That’s not my problem. No that’d be just too good for me. My two roads go forwards and backwards and I know what lies at the end of both of them. Isn’t that just perfect? I go forward and it’s like stepping into thin air. There’s nothing out there for me. I’m no good at this.

But backwards, backwards might just be worse. Home. I can’t turn around. I just can’t. I’m not going home. And yet it’s safe, it’s secure, it’s peaceful. But ignorance is bliss and I’m fresh out of ignorance. I dared to peak over the edge and now I’m stuck here. By the side of the road.

Backwards and forwards depend on which way you’re facing. Good and bad depend on who you are. No one behind me will go forwards. It’s too late or too soon, they’re too happy or too afraid. They’ve all let down roots, or pretended to, and now they’re stuck in quicksand. Home is quicksand.

I can’t be the only one to have come here, to have walked along the road side and stopped to ponder my choices, sitting on a picnic bench stained with mustard and dotted with bread crumbs. Whoever left them here wasn’t worrying about forwards or backwards. They just stopped the car for a meal. They had a destination.

Now I ask you this about destinations; are they good or bad? Because a destination is a safety net, the way home is. A destination is a path set for you by the serene voice of a GPS or mapped out with red pen on an old map. Destination is known and sure, written down and researched. Destination is a plan. But destinations are also blinders, because people hang everything on this destination. They don’t stop, they don’t get sidetracked. They follow their path and never wander off into the woods. They never find the beauty but they never get devoured by wolves either. So good or bad? We all have to decide that for ourselves. One person’s sin is another person’s virtue. And me, I don’t have a destination. I don’t have a plan. I’m just wandering, seeing how far my curveball path will get me.

I don’t want fame or fortune. I don’t even want happiness. I just want to move. I don’t want to wear down the same ground each and every day. Some people, they’re born on the same ground they walk on all their lives and are buried in when they die. That’s just dandy for them. But for me, I get restless. I get sick of the ground and the sky and the same old streets day after day. I want to walk along the ground in Paris, see the sky from Hong-Kong, study the streets of Berlin. I don’t care if I die without a single person knowing my name. But that’s not going to happen you see. As we walk through the world, we’re clumsy. We knock a few things down as we go. We pick a few things up. We crush things, we fix things. The point is we leave our mark.

I’ve always liked the idea of graffiti artists who travel around, leaving their signature on the walls of a million buildings on a thousand streets of a hundred cities. The rock they throw into the ocean, into the world, isn’t any larger; they just give it a bit more thrust. You never know how much of the world you’re going to change. If I’m going to mess something up or fix it or just push it down another path, I want to see what I’m changing. And I don’t like blinders.

When I was a kid I wanted to go and sit in airports. I’d want to get on the planes that didn’t have enough people and were offering discount seats so they wouldn’t go haywire with an improper weight. I’d let fate decide my destination and I’d never have any blinders.

It’s like tourists, when they start walking, they’re going where they’re going, and no peddler or crowd or traffic jam is going to stop them. They walk past all these incredible things and never see any of it. It’s a tragedy. You give me a bible or anything holy to anyone and I’ll swear that I’ll never be like that, and if I am then I’m somebody so different from the person who made that pledge.

In eight years, we will all have entirely new bodies. Every cell will have died and been replaced. We will be brand new. Who were you eight years ago? Who was I? Who was the man with the mustache who drove by in the pick-up truck five minutes ago? Who was the actress on TV, or the model on the cover of your magazine? In eight years, wherever I am, whoever I’m with, I’m changing my name. I’m dying my hair and buying a different wardrobe and going somewhere brand new. I’m going to be a different person.

Yesterday I was a girl called Jane. I was common as dirt and smart in a way that never got anyone anywhere. I kept my head down and spoke when spoken to. I got good grades and read the library, and half the people I met never even realized I was there. Let me just say, that might as well have been eight years ago.

So sure mister, I’ll ride with you. I’ve got nowhere to go but forward, cause I’m sure not going back. I can’t flip a coin cause I don’t have one. And if you weren’t here I’d just have to keep walking. The fact of the matter is, there are two roads, even if it doesn’t look like it. But me being who I am, well I don’t have much of a choice. I’m going forward. If I didn’t, I’d regret it till the day I died.

Who am I? Well I told you mister, I can’t answer that question. I haven’t even figured that out yet myself.

Where am I going? I don’t know either. Just take me wherever you’re headed and I’ll go from there. It doesn’t matter much to me as long as I’m going somewhere. I want to walk different ground, see the sky from a different view. I’m going anywhere as long as I’m on my way. And that’s my only destination. Now hop in. We’d better get going. There’s a whole world to catch. 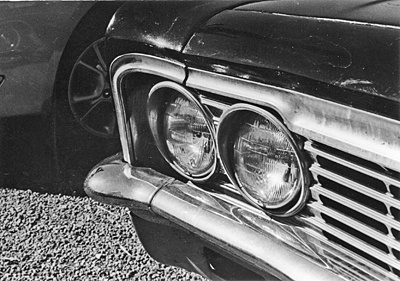