She ran with the burning candle in one hand and the box of matches in the other. She ran to the half-empty wood shed which she spent so much of her time as a child. By the time she closed the shed doors the candle had blown out.
Her mind was filled with the obsessive thoughts of relighting the candle so much so that her thoughts allowed her to completely block out all sounds that surrounded her. This included not only the pattern of falling rain drumming against the shed's metal roof, but also the sound of Justina calling out her name.
Callie sat cross legged on the rough, uneven wood floor of her favorite childhood hide-out. In the darkness she slid a match out of the cardboard box which fit in her palm and she struck it against the rough side one, two, thr-
The green metal doors swung open to reveal a silloette against a dimly lit background. Callie scurried towards the far corner of the shed, but she ran into the bicycles which were stored there and knocked it onto her lap. Justina stepped in, her muddy black Pumas leaving a trail of footprints behind her. She ran in and removed the bicycle to bring it back to its original upright position. "I thought I might find you here," Justina said as she walked back to close the door and latch it shut, "since you didn't answer the doorbell."

"Okay," Callie replied timidly, wishing she had remembered to lock the door like Justina had.
"Do you have any light in here?" Justina was struggling to keep her voice sounding relaxed and uninterested to cover for the anxiety and desperation that she felt throughout her whole being.
Without a word Callie scooted back towards her candle stick and matchbox. As he struck the box and lit the candle Justina meandered over towards the card table which they had used during countless slumber parties throughout the years. "Wasn't there a flashlight somewhere in here?" She got to the old plastic shelf which now held various boxs of souvenirs bought by Callie's parents in the 70s and 80s, old photo albums and other forgotten relics of past lives. That's what the whole shed was filled with, the unwanted, unused and unneeded, all of which have been forgotten, Callie felt at home with them.
Justina ran her hand across the shelves until, on the shelf four feet above the ground, she found a flashlight covered in a years worth of dust and grime. "Found it," Justina proclaimed and switched the flashlight on.
She walked over to sit across form Callie who had returned to her crossed-legged position while she held her candle in her lap with her right hand while her left palm floated over the flame. Justina stared timidly at Callie, but for Callie, it wasn't a big deal, running her hand over fire was natural, even while her friend is sitting directly across from her.
"You can blow out the candle if you want," Justina offered hopefully, she had lost control of keeping her voice, now her desperation was blaringly obvious.
Despite this Callie immediately and firmly replied, "No, it's a good source of light." Callie could feel herself quivering and hoped that Justina wouldn’t notice.
Justina inched herself closer to her dear friend and tried to calmly ask, "Something's wrong, isn't it?"
Callie lept to her feet, candle still in hand, and walked to the other side of the room, "Maybe," she said, "but there's always something wrong, right? Life can't ever be perfect." Callie stood next to the wheel barrow which held containers of gas for the lawn mower. Callie began to fiddle with one of them.
"I suppose, but do you need help? You know I'm here for you."
"I know. That’s I knew you would come." Callie brought the candle to the opening of the container and said, "Justina, you know I love you." To which she replied, "Yeah, I love you too, but-"
And then it ended for both of them just as they'd both predicted, Callie knew her destiny was with flames and Justina knew her destiny was with Callie. 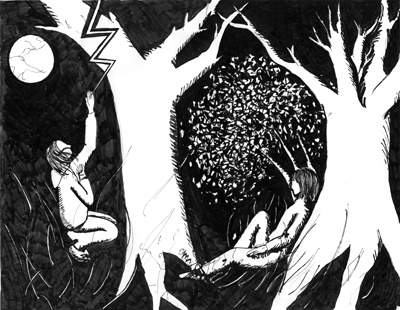